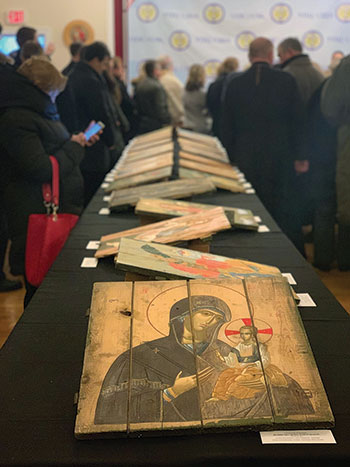 SOUTH BOUND BROOK, N.J. – In continuing the commemoration of the fifth anniversary of the deaths of the Heavenly Hundred during the Euro-Maidan Revolution of Dignity in 2014, an icon exhibit opened February 20 at Pokrova Sisterhood Social Hall. “Buy an Icon – Save a Life” is an art project of Kyivan artists Sofia Atlantova and Oleksandr Klymenko.

The hall became a place of a solemn reflection, as those in attendance viewed the images of the lost men and women of the Heavenly Hundred. The event was organized by the Consistory of the Ukrainian Orthodox Church of the U.S.A., in cooperation with the Ukrainian History and Education Center, to benefit the Pirogov First Volunteer Mobile Hospital (PFVMH), the largest non-governmental project involving civil health professionals in the provision of medical assistance in the zone of Joint Forces Operation (formerly Anti-Terrorist Operation in the Donetsk and Luhansk oblasts of eastern Ukraine.

Archbishop Daniel, in the presence of Metropolitan Antony, opened the memorial exhibit of the icons, written on ammunition boxes, which were brought from the combat zone and delivered to the U.S.A. for the exhibition and charitable sale. This exhibit-sale is set to benefit the PFVMH, which exists in cooperation with Ukraine’s Ministry of Health, Defense Ministry and General Staff of the Armed Forces of Ukraine with support from the National Security and Defense Council.

Archbishop Daniel stated that during its operation in the ATO/JFO zone, the PFVMH has provided timely and skilled medical care to over 56,000 patients. The hospital has been stationed in 49 locations in the Donbas – in cities and villages, as well as in the field and at checkpoints on the contact line.

Introducing Gennadiy Hruzenko, the acting president of the PFVMH, Archbishop Daniel noted the important charitable work done in providing care for the wounded soldiers and their families.

Mr. Hruzenko pointed out that in the fall of 2015, the PFVMH extended its activities to peaceful regions of Ukraine and performed unprecedented cardio screening in the Khmelnytsky region, which covered 22,433 persons in 565 localities.

Exhibitions of the icons on ammo boxes, have already been held at the European Parliament, the Verkhovna Rada, the Parliament of Lithuania, St. Sophia Cathedral in Kyiv, Pecherska Lavra and the Embassy of Lithuania in Ukraine. The icons have been displayed in The Hague, Antwerp, Berlin, Frankfurt am Main, Munich, Hanover, Leipzig, Bonn, Cologne, Warsaw, Vienna, Lublin, Prague, Rome, Milan, and Catania on Sicily, Los Angeles, Edmonton, Winnipeg and Toronto, as well as the Ukrainian cities of Lviv, Lutsk, Mariupol, Dnipro, Kamyanske and Pokrovsk. Exhibitions of the icons on ammo boxes were also part of the 25th Economic Forum in Krynica, Poland, and the eighth Kyiv Security Forum. Exhibits were also held at the University of Alberta in Canada, the Ukrainian Catholic University in Lviv and the Superior Institute of Religious Sciences of St. Thomas Aquinas in Kyiv.

Archbishop Daniel shared with everyone in attendance that the main idea of the project is the transformation of death (symbolized by ammo boxes) into life (traditionally symbolized by icons in Ukrainian culture). “What is important, this victory of life over death happens not only on the figurative and symbolic level but also in reality,” he said.

In profound silence, some 200 people walked through the isles of icons and portraits of the heroes of the Heavenly Hundred, while opening their hearts and offering donations for the icons in the exhibit, thus supporting the work of the Pirogov First Volunteer Mobile Hospital.

Readers interested in sending donations or in purchasing an icon may contact the Consistory of the UOC of the U.S.A. via e-mail, ConsistoryOPR@aol.com.