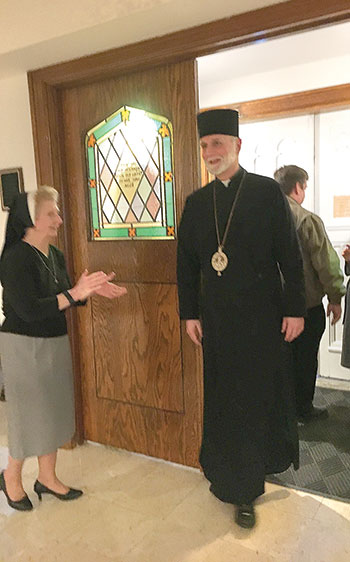 Sister Dorothy Ann Busowski
Metropolitan-Archbishop-elect Borys Gudziak is greeted and welcomed by the Sisters of St. Basil the Great.

FOX CHASE MANOR, Pa. – On Saturday, March 2, the Sisters of the Order of St. Basil the Great in Fox Chase were surprised and thrilled by a visit from Metropolitan-Archbishop-elect Borys Gudziak, who was recently appointed by Pope Francis to serve as head of the Ukrainian Catholic Church in the United States of America.

Accompanied by Auxiliary Bishop Andriy Rabiy, Metropolitan-Archbishop-elect Borys spent part of the afternoon conversing with the sisters, sharing the vision he has for the archeparchy and eliciting ideas from the sisters about future endeavors. It was an enlightening conversation during which the hierarch also shared stories of his experiences while serving as spiritual leader of St. Volodymyr the Great Ukrainian Catholic Eparchy, which includes France, Belgium, the Netherlands, Luxemburg and Switzerland.

The most touching and endearing aspect of the conversation was the openness and vulnerability of Metropolitan-Archbishop-elect Borys as he asked what the Basilian Sisters expected of him as archbishop-metropolitan. This was a most impressive revelation about his vision of leadership – a commitment to lead by listening.

The Sisters of St. Basil said they look forward to a warm relationship with the new archbishop and extended to him their heartfelt support and a “Mnohaya Lita” to wish him many happy and healthy years.