Pharmaceutical and Silicon Valley entrepreneurs grapple with the definition of success 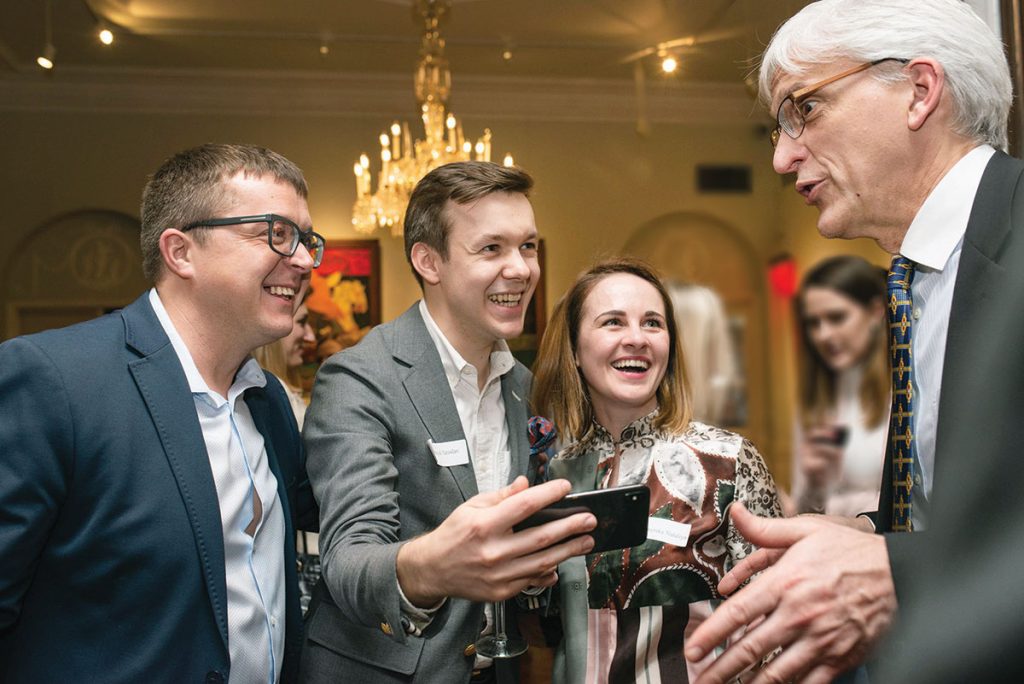 NEW YORK – How do you define success? This was one of the many questions that entrepreneurs Leonard Mazur and Yaroslav Azhnyuk addressed during a far-ranging discussion at the inaugural event of the Ukrainian American Business and Professionals Association (UABPA).

Ivana Lotoshynski, president of People Wealth Matters LLC and the chair of the UABPA board, moderated the highly anticipated event, held on the evening of February 23 at the Ukrainian Institute of America (UIA) in New York, and introduced both of the featured entrepreneurs.

The UABPA, established in 2016, is a non-profit organization with a mission to inspire and empower current and future Ukrainian American entrepreneurs and professionals through business support, education and networking.

Mr. Mazur, director and chairman of the board of Citius Pharmaceuticals (NASDAQ: CTXR), is the son of Ukrainian immigrants who arrived in the United States in the late 1940s. During his career in the pharmaceutical industry, he worked on developing a variety of drugs, from calcium channel blockers for hypertension to antibiotics for the treatment of acne.

One of his most notable achievements occurred while working at ICN Pharmaceu-ticals (now Valeant Pharmaceu-tical); Mr. Mazur was on the team that developed the first antiviral drug (Virazole, Ribavirin) for the treatment of a deadly respiratory virus that afflicts infants. When this medication was introduced on the market, Mr. Mazur would receive calls from parents, doctors and nurses thanking him and the company for creating this drug and saving the lives of countless children.

As a boy, Mr. Mazur emigrated with his family to America and settled in Salisbury, Maryland, where his father worked on a farm. There they lived and worked with a number of other Ukrainian Catholic families, preserving their cultural heritage and their religion, arranging for priests to come from surrounding areas and celebrate liturgy.

One particular priest, Father Libid, befriended the family and encouraged Mr. Mazur’s father to seek employment in Philadelphia, where he worked in construction and as a cement finisher. Mr. Mazur attended West Catholic Prep School in Philadelphia, an experience that left an indelible mark on the young man.

After high school, he enrolled in Temple University to study business. When his father was unexpectedly laid off, the family was thrust into a financial crisis, and Mr. Mazur was able to complete college only with the help of a local merchant who underwrote his expenses.

Inspired by the kindness shown to him as a student, Mr. Mazur and his wife, Helen, would later make the largest donation ever – $5 million – to Philadelphia’s West Catholic Prep School. Even amidst his personal success, Mr. Mazur remembers those who helped him along the way, and continues to look for ways to provide opportunities for others in need.

Mr. Azhnyuk co-founded the startup Petcube, known for devices that pet owners can use when away from home to monitor and play with their pets remotely. Since its inception, Petcube has enjoyed substantial success, secured over $14 million in funding, and established offices in the United States, China and Ukraine.

Born in Ukraine in the 1990s, Mr. Azhnyuk moved to Silicon Valley in 2015 to work on Petcube. He doesn’t consider himself an immigrant, but rather describes his current arrangement this way: “I’m an expat in the United States. I moved to this country because of my work. My country is Ukraine. I was born there, I grew up there, [and]I love my culture…”

When asked about the challenges he faced while building his company Mr. Azhnyuk told a story of how he and his co-founders almost gave up on Petcube after only three months of working on the idea:

“After many attempts of working with factory owners, we felt like we were not [being]taken seriously and were being deceived. We were disappointed and … I began to say that nothing would happen, [and]it’s time to close the business… Andrew, who is our chief designer listened to all of this, looked at us and said: ‘Are you guys crazy? Look at what I have made for you.’ He pulled something out of his bag and placed it on the table. These were leather cardholders in the form of a hexagon, our logo… the room changed color, and suddenly the mood was super elevated. We decided that everything would work out for to us. We would find a way to make things happen. This is a fantastic lesson about how beauty can save the world, how important emotions and creativity are… Leading by doing, leading by inspiration.”

Mr. Azhnyuk feels that “success” is a word that can often be misused. He cautioned against the delusion that money, fame, or power could ultimately bring happiness. And he counseled other entrepreneurs to harness their egos to create, to improve the lives of others, and to do something of use and value in the world. “That to me is success,” he said.

The event at the UIA was attended by close to 100 people: business professionals, Ukrainian community organizers, innovators, journalists. Those who attended commented on the various benefits of organizing such events.

Orest Temnycky, executive vice-president and CFO at Self Reliance (NY) Federal Credit Union, remarked that “this organization [UABPA] is moving ahead and trying to build more networks within the community for mutual benefit. It is really the concept of why Ukrainian credit unions were founded in the first place – to help each other succeed, especially with individual home-ownership as well as in support of Ukrainian organizations.”

Orest Bauer remarked, “My favorite parts of the event were the interesting stories that both of the speakers had. I think it helps a lot when they bring this personal aspect to it as an example to prove a point.”

Businesswoman Brigitte Nioche noted, “It was eye-opening to have two people of different generations here tonight. They both had something to add…”

Dr. Michael Lewko not only attended the event but recently purchased a PetCube device for his pets at home. “I was very impressed by Yaroslav’s patriotism, [and this was the]reason why I bought PetCube…,” he says. “Yaroslav talked about love for the country and wanting to bring back his success… to the people who work over there [in Ukraine]and he wants to see Ukraine prosper. He wants to give back.”

The Ukrainian American Business and Professionals Association (UABPA) titled this event “Hourglass: Success Stories” to reflect the fact that businesspeople always have very little time. However, all those in attendance appreciated that these two successful entrepreneurs shared their time and insights with the community at the Ukrainian Institute on this particular evening.

UABPA organizers are planning future events in the series, and will continue to profile stories of success and innovation among entrepreneurs in the Ukrainian American community. Those interested can stay tuned regarding upcoming events by visiting the website www.uabpa.org.