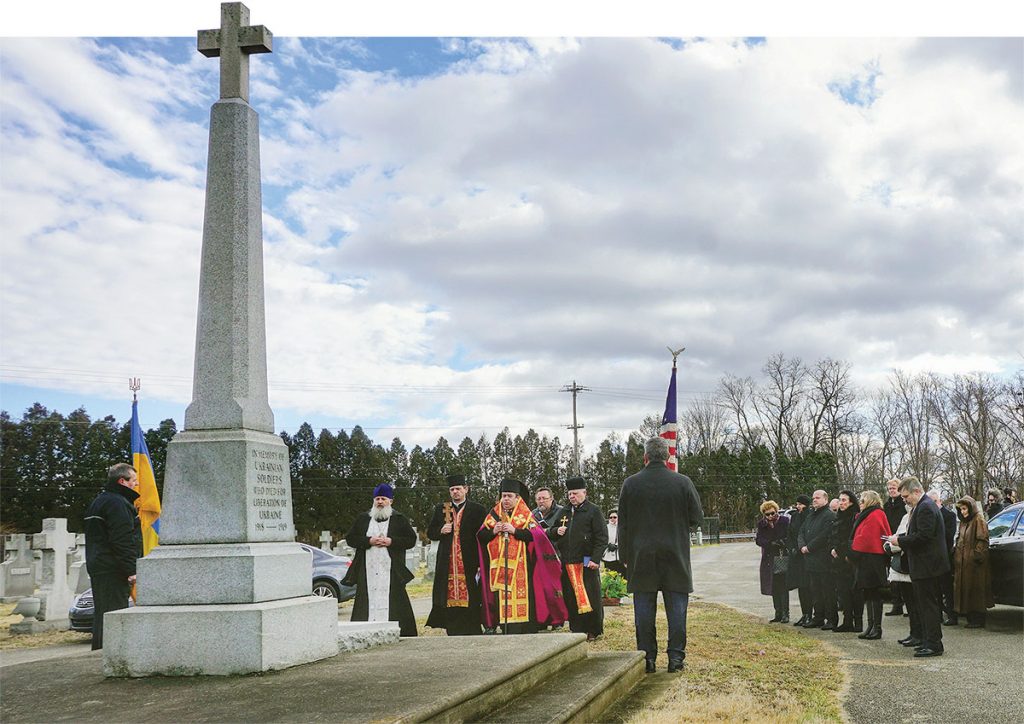 Zenia Brozyna
During the panakhyda at the Tomb of the Unknown Soldier of the Ukrainian National Republic.

The day began at St. Mary’s Ukrainian Catholic Cemetery in Elkins Park, Pa., with a panakhyda (memorial service) and laying of flowers at the Tomb of the Unknown Soldier of the Ukrainian National Republic and the grave of Lonhyn Cehelsky, who was sent to the U.S. in 1920 as a representative of the Ukrainian government

Bishop Andriy Rabiy, apostolic administrator of the Ukrainian Catholic Archeparchy of Philadelphia, and the Revs. Taras Naumenko (protopriest and dean, St. Vladimir’s Ukrainian Orthodox Cathedral), Roman Pitula (rector, Ukrainian Catholic Cathedral of the Immaculate Conception) and Yaroslaw Kurpel (pastor, Christ the King and St. Nicholas Ukrainian Catholic churches) concelebrated the solemn service and participated in all of the events of the day.

Ambassador Chaly, Eugene A. Luciw, president of the Philadelphia Branch of the Ukrainian Congress Committee of America (UCCA), and Maria Kvit-Flynn, an active member of the U.S. Committee for Ukrainian Holodomor-Genocide Awareness who represented the Cehelsky family, delivered words of tribute.

A commemorative concert, directed by mistress of ceremonies Zenia Brozyna, at the Ukrainian Educational and Cultural Center in Jenkintown, Pa., followed. Representatives of Plast Ukrainian Scouting Organization and the Ukrainian American Youth Association served as the color guard, as Yuliya Stupen opened the concert with powerful renditions of the Ukrainian and American national anthems. Yuliana Fartachuk then gave a moving reading of the Act of Union. Bishop Andriy led the faithful in prayer.

Bishop Andriy and the ambassador, in their truly inspirational words to the audience, underscored the indispensable value of worldwide Ukrainian unity and cooperation in Ukraine’s defense against Moscow’s aggression and in Ukraine’s further growth and development on both the domestic and international levels.

Roman Dubenko, a long-time beloved teacher of history in the Ukrainian Heritage School, delivered a keynote speech that not only brought to life the historical context and timeless significance of Ukraine’s Act of Union, but also called Ukrainians to action in the fight against Moscow’s ongoing campaign of disinformation.

At the conclusion of his address, the ambassador presented awards to Philadelphia community activists Dr. Larissa Kyj, long-time president of the United Ukrainian American Relief Committee, and Iryna Mazur, vice-president of the Ukrainian Federation of America. He also recognized the great work of the Ukrainian Educational and Cultural Center and the Philadelphia area Ukrainian Heritage School, and gave lovely presents to each.

The Swords of the Kobzars youth bandurist ensemble, the Accolada Chamber Choir, and the Prometheus Ukrainian Male Chorus of Philadelphia gave magnificent performances of Ukrainian patriotic music and song. Ms. Brozyna presented Ambassador Chaly with a pictorial book and calendar full of information about and historic photos of the Ukrainian Insurgent Army (UPA). The book also highlighted Ukraine’s current heroes, who are defending their nation against Russian aggression.

The commemoration concluded with a reception at which the bishop and the ambassador could chat with leaders of the Philadelphia area community. A surprise visit by young Christmas carolers supporting the Revived Soldiers Ukraine organization added flair and inspiration to the end of the day.

The organizers and sponsors of the event were the Philadelphia Branch of the UCCA, the Society of Veterans of the UPA and the Ukrainian Selfreliance Federal Credit Union of Philadelphia.