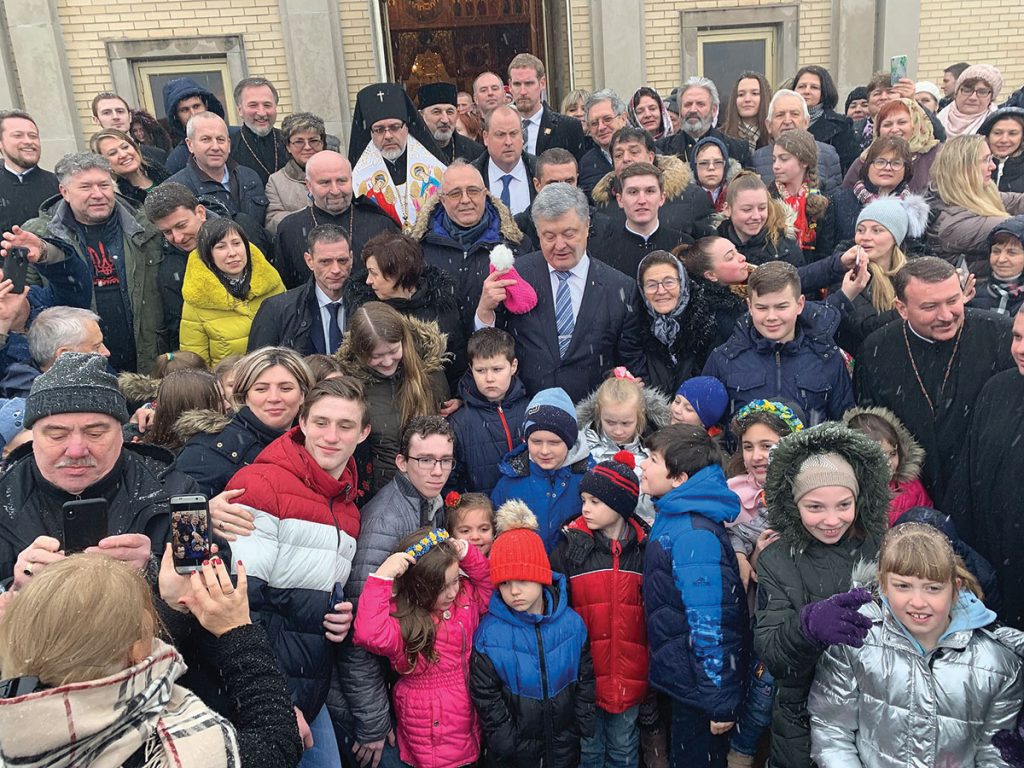 President Petro Poroshenko, who was in the U.S. on a working visit, surprised the faithful as he participated in the memorial service. He was greeted by the three hierarchs and the more than 400 people who arrived at the spiritual center of the UOC of the U.S.A. in South Bound Brook for the memorial service.

Prior to the beginning of the Memorial Service, Metropolitan Antony stated: “As we mark the fifth anniversary of the still incomprehensible murder of over 100 Ukrainian citizens on the Maidan in Kyiv – simply because they stood for the freedom of choice in their nation without control or manipulation from other nations – we your hierarchs state without any reservation that by all human calculations, Ukraine should not even exist today having suffered cataclysm after cataclysm after cataclysm throughout her history during which so many millions of people perished and millions more who were never born because those who perished were unable to give them life. How can a nation continue to exist and endure if its population cannot grow through the birth of successive generations? It is by the Grace of God that Ukraine exists.  Once again, we encourage you all to pray fervently for Ukraine, especially to the Mother of God who has always extended her veil of protection over her people.”

He added: “What is important to remember at this first anniversary of the Euro-Maidan murders as we commemorate these fallen heroes is that they were not simply following the example of earlier martyrs for truth in Ukrainian history. They were standing firm for truth and human dignity in response to the circumstances of today – standing against those who would sell Ukraine’s independence once again to foreign invaders.”

Following the ecumenical memorial service, with responses chanted by the choir of St. Andrew Memorial Church, Metropolitan Antony formally welcomed President Poroshenko to the Spiritual Center of the UOC of the U.S.A.

Mr. Poroshenko remarked that the days from February 18 to February 21, 2014, had entered the history of Ukraine forever, when, pursuant to the criminal order of the former authorities, fire was opened at the heroes of the Heavenly Hundred.

“What did our heroes give life for? The Revolution of Dignity began in November 2013 because of a very simple reason – Ukraine no longer wanted to live under the Soviet or Russian yoke. The Ukrainian people sought to return to the European family of nations. And it united us. Why were we winning all these five years? Because the nation was united,” Mr. Poroshenko said.

He continued: “What did the heroes, who gave their lives, strive for? They loved Ukraine very much, they loved Ukrainians very much. And that is why it is so important for us to always remember this, to pray, to value the great responsibility they put upon us with their death. So that we do not waste time. So that we never allow our unity to be destroyed. So that we know where we are going and win on this path.”

The president pointed out that, “This very date [February 20, 2014] was scratched on Russian medals distributed to the Russians and collaborators in honor of the Crimean occupation.”

“I want us today to pray for the Heroes of the Heavenly Hundred and pay tribute to those who gave their lives for freedom and independence of Ukraine. Ukrainians are such a nation that can never live without freedom,” he said, as he thanked the Ukrainian soldiers who are now defending the Ukrainian land at the front and rebuffing the Russian aggressor, as well as Ukrainians of the United States for their prayers for Ukraine.

In response, Metropolitan Antony said, “The world should know that the generations of Ukrainians remember that Heroes do not die … They continue to live in the memory of the nation and be an example for future heroes who make history.”

He thanked President Poroshenko for his efforts to protect and develop Ukraine. “When five years after the tragedy on Maidan, aggression and suffering, I visit Ukraine, I see many positive changes under your leadership. Thank you for your leadership,” Metropolitan Antony emphasized.

President Poroshenko stressed that Ukraine finally has its independent church. He thanked Ecumenical Patriarch Bartholo-mew, leaders of Ukrainian Churches, Patriarchal exarchs (Archbishop Daniel of the UOC of the U.S.A. and Bishop Ilarion of the UOCC), thanks to whose efforts this historic event came to be.

Mr. Poroshenko also noted that he had begun that day with a meeting with the president of the General Assembly of the United Nations and had the honor of speaking on behalf of Ukraine at the debate on the situation in the occupied territories.

Coming outside, into snowy stormy weather, the president was welcomed by the numerous parishioners and visitors to the Spiritual Center of the UOC of the U.S.A. With a prayerful greeting “Glory to Jesus Christ!” and a joyful “Glory to Ukraine – S lava Ukraini!”

Departing the Metropolia Center of the Ukrainian Orthodox Church of the U.S.A., President Poroshenko personally reached out to the people in attendance and asked them to pray for the people of Ukraine.

An icon exhibit, featuring works by artists from Ukraine with icons written on ammunition boxes from the war in eastern Ukraine, was on display at Pokrova Sisterhood Social Hall (see above).