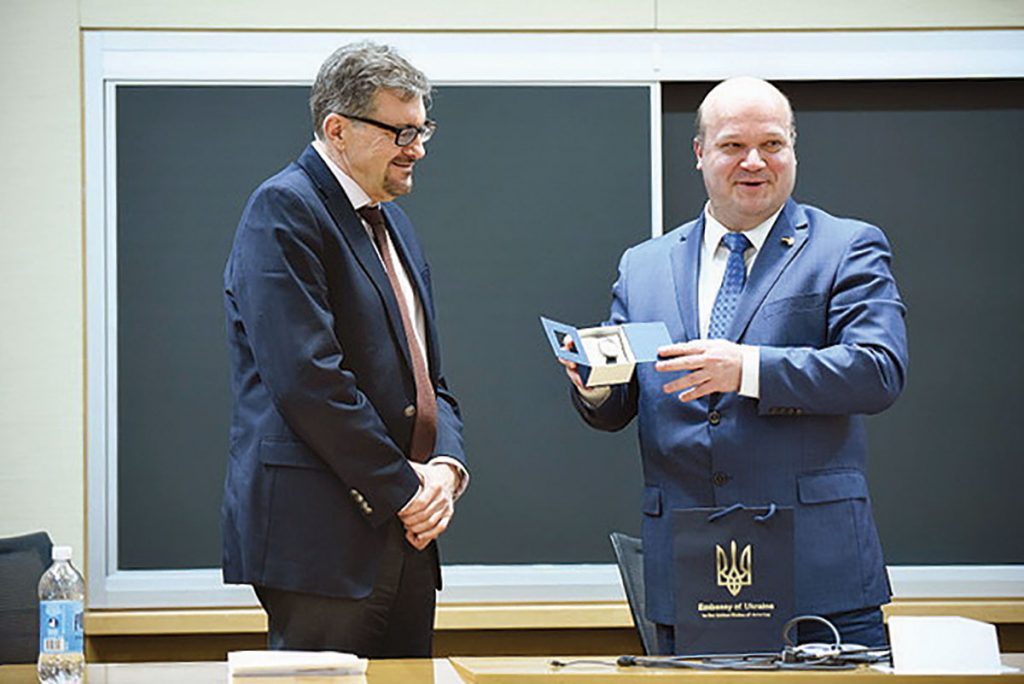 CAMBRIDGE, Mass – Valeriy Chaly, Ukraine’s ambassador to the United States, repeatedly emphasized during a public talk here on April 15 the importance of Ukraine’s geopolitical role in Europe, as well as the country’s work to secure peace in the region and counter Russian aggression.

Speaking before an audience of two dozen people at Harvard University, the ambassador also highlighted the importance of Ukraine’s bilateral relationship with the United States.

“First of all, it’s our common goal and our common objective to secure this part of the world, and not allow anybody to destroy the international order that we created with significant effort after Helsinki, after the Cold War,” said Mr. Chaly, who has been Ukraine’s ambassador to the United States since July 2015 and is also Ukraine’s ambassador to Antigua and Barbuda and the Republic of Trinidad and Tobago.

“It is very important that we not allow anyone in the world – including Russia, North Korea or other countries – to violate human rights and international order,” Mr. Chaly said.

The ambassador underscored that Ukrainians have paid the biggest price to secure this order. “The biggest price because 13,000 [were]killed, 28,000 wounded,” Mr. Chaly said, adding that, of the 13,000 Ukrainians killed during the war, 3,000 have been soldiers in Ukraine’s military.  “It is absolutely unbelievable what we must pay to secure not only our people and our territory, but also Europe.”

Ukraine’s military was not prepared for the war that broke out in eastern Ukraine in 2014, or for Russia’s subsequent annexation of Crimea.  But the country’s military preparedness has vastly improved since the war began.

“We have made significant results and achievements in recent years to restore our capabilities with the support of the United States,” Mr. Chaly said.  “Now the Ukrainian army is in the top 10 of armies of Europe.”

The ambassador added that Ukraine had in the last week received additional medical and armored vehicles, as well as communications equipment from the United States.  “We have received anti-tank weapons that have saved the lives of our guys,” Mr. Chaly noted.

Moreover, additional aid is expected to arrive in Ukraine soon. “We believe we will receive something else in the next months,” he said, though he did not elaborate on what specifically Ukraine expects to receive from the United States.

According to the ambassador, Ukraine now gets 92 percent of its military support from the United States.  Some 200 troops from the U.S. Army’s 101st Airborne Division are expected to arrive in Ukraine in the coming days for training exercises, the ambassador said.  “Yesterday another American ship entered the Black Sea to guarantee that any attempt of destabilization in this area will be under control and accountable.”

“I give you these facts so that you understand how seriously we take this threat,” Ambassador Chaly said, adding that Ukraine’s experience can be used as a case study for other countries who might need to defend themselves against similar aggression.  “I understand that only a strong Ukraine – a Ukraine that is ready to stop Russia – will ensure our survival.”

Throughout his talk, the ambassador repeatedly stressed the role Ukraine continues to play as a buffer between Russian aggression in the region and the rest of Europe.  “It makes Ukraine the eastern flank of NATO in defense of trans-Atlantic democracy and freedom, because you can’t defend freedom without a strong army, and we understand that.  We learned this lesson.  We do not want anybody to be next after us.  That is why we now have a historical role to change the behavior of Russia and the Russian leadership.”

Mr. Chaly reminded the audience that Ukraine agreed to give up its nuclear arsenal not long after the country gained its independence.  Without those weapons as a deterrent, Ukraine has had to find other ways to defend its sovereignty.

“We understand that we have to define ourselves in this situation – giving up the third largest nuclear arsenal in the world,” he said.  “And, frankly, we have not received real guarantees of our territorial integrity and sovereignty,” the ambassador noted, adding that Ukraine will continue to counter the threat posed by Russian aggression in Eastern Europe.

“The huge, huge mistake of Mr. Putin – personal mistake – is that he has underrecognized Ukrainian history, Ukrainian behavior, Ukrainians’ willingness to be free and Ukrainians who are ready to fight for their own families.”

The ambassador previously served as the deputy head of the Presidential Administration of Ukraine from June 2014 to July 2015.  In April 2010 he resigned his position as Ukraine’s vice minister of foreign affairs in protest against the foreign and security policy pursued by then President Viktor Yanukovych.

In addition to his work in government, Mr. Chaly was the deputy director general of the Razumkov Center, a prominent think tank and research center in Ukraine, in 2006-2009 and in 2010-2014.  In that position he supervised the center’s foreign policy, international law and security programs.