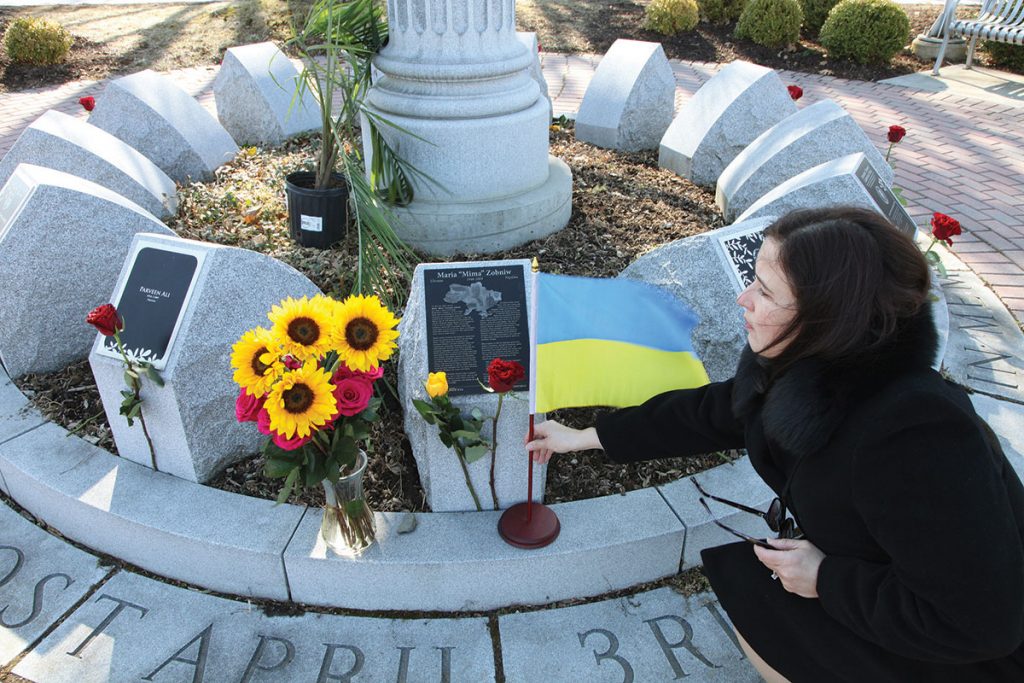 Richard Bell
Maria Zobniw’s daughter Zoriana Zobniw Nehrebeckyj arranges a Ukrainian flag and flowers before the plaque honoring her mother, one of 13 people killed in a mass shooting in Binghamton, N.Y., 10 years ago.

BINGHAMTON, N.Y. – On April 3, families of the 13 victims of the April 3, 2009, mass killing at the American Civic Association gathered at the ACA building in Binghamton, N.Y., at 10:30 a.m., the estimated time of the shooting ten years ago. They came to attend a tribute to those killed by a deranged gunman (who also shot himself) and for a vigil service.

Families stood before the Binghamton ACA Memorial, on the corner of Front and Clinton streets, to mark the 10th anniversary of the tragedy. The monument’s center has a broken tree stump and 13 birds ascending in flight; it is surrounded by 13 plaques – one for each victim, including Ukrainian American Maria “Mima” Koropey Zobniw.

The program started with a prayer by the Rev. Theodor Czabala, pastor of Sacred Heart Ukrainian Catholic Church. Mayor Richard David served as the master of ceremonies. Matthew T. Ryan, who was mayor at the time of the shooting, highlighted the events of that tragic day and spoke of current plans for this monument.

After Dr. Jeff King spoke of his mother, Roberta, Oresta Zobniw Lisowsky remembered her mother, Ms. Zobniw, the first victim of the mass killing, with the Ukrainian folk song “Cranes” (“Chuyesh Brate Miy”). The ACA memorial is reminiscent of that Ukrainian folk song, which was sung by Eugene Czebiniak, choir director at Sacred Heart Church.

An active member of Sacred Heart Ukrainian Catholic Church, a Ukrainian school teacher, a member of Plast Ukrainian Scouting Organization, president of the Binghamton branch of the Ukrainian National Women’s League of America, secretary of the local chapter of the Ukrainian Congress Committee of America, Ms. Zobniw was the organizer of many public exhibits and programs aimed at informing the public about Ukrainians. She took personal pride in organizing Ukrainian Independence Day celebrations at Binghamton City Hall. She reached out to serve the broader immigrant community at the American Civic Association.

The memorial events were widely covered by the local media, including the Binghamton newspaper Press & Sun-Bulletin, which published news stories and articles over the course of five days, and all area news channels.