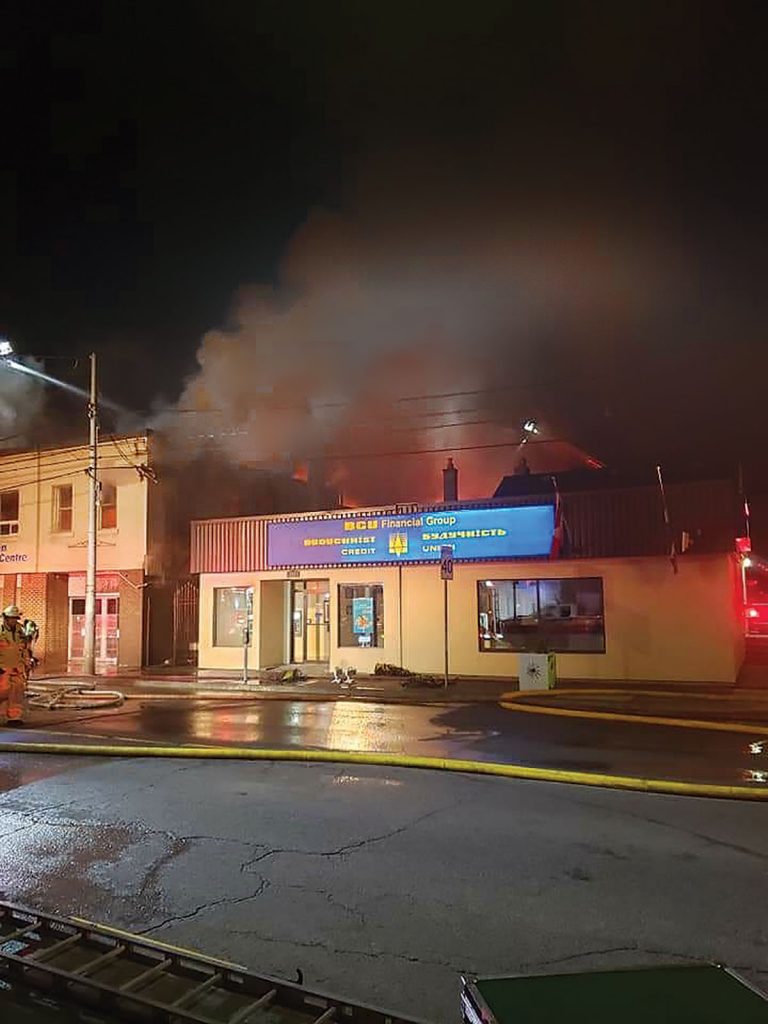 Yura Ivanovo
Fire and smoke rise from the Ukrainian Cultural Center of Hamilton, Ontario, (left of the Buduchnist Credit Union).

PARSIPPANY, N.J. – The Ukrainian Cultural Center of Hamilton, Ontario, was destroyed by a fire that began in the early hours of Saturday, April 13.

Yura Ivanovo and his wife, Larysa Zariczniak, were among the first on the scene at 3 a.m. that morning after receiving a phone call about the disaster, when the center had filled with heavy smoke.

“I basically just started crying because I spent all my youth there. Basically my entire youth was spent in that building,” Ms. Zariczniak, 36, told Laura Clementson of the Canadian Broadcasting Corporation (CBC). “The building housed us from when we were infants. Friendships were made there,” she said. Ms. Zaricznaik is president of the Ukrainian Youth Association branch in Hamilton. She said the center was the place where she learned more about her Ukrainian culture after immigrating to Canada from Poland at the age of 6.

On Fridays, while in high school, she attended lessons about Ukrainian history, literature and geography. On Tuesdays she would practice playing the bandura.

Ms. Zariczniak said the loss was not only of a place of memories but the hall itself dates back even further to when it was a movie theater. The center, she added, was not only a place for Ukrainians, but for the whole community, which utilized it for various events.

Deputy Fire Chief John Verbeek told the CBC, “The building can be considered a total loss.” There were no injuries, he said, but damage was extensive, estimated at approximately $2 million. The building’s roof collapsed as a result of the fire.

The Hamilton Fire Department received a call about the fire at 12:21 a.m. and the first crews to arrive on scene confirmed that there was a fire on the second floor of the building that extended to the roof area, said Mr. Verbeek. Emergency units from local police and EMS were also called to the scene.

The situation was immediately upgraded to a multiple-alarm fire that brought additional resources from across the city. Crews simultaneously fought the fire while conducting search and rescue operations. Once inside, crews had to be pulled from the second floor due to unsafe conditions and structural concerns.

An investigation is being conducted by the Ontario Fire Marshal to determine where and how the fire began. No signs of arson were detected.

Ms. Zariczniak said there are a few other venues in Hamilton where Ukrainians and the community at large will be able to hold their events in the meantime.

Buduchnist Credit Union has extended its support for the Ukrainian Canadian community of Hamilton.

The Ukrainian Canadian Congress National President Alexandra Chyczij issued a statement in response to the tragedy:

“This morning many of us woke up to the news that the Hamilton Ukrainian Cultural Centre had suffered a terrible fire overnight. While it is fortunate no one was injured, the building was devastated.

“For many, this building is associated with cherished memories of christenings, weddings, New Year’s balls, and other celebrations.

“It was home to the Ukrainian Youth Association (CYM), the League of Ukrainian Canadians, Svitanok Women’s Choir, the Taras Shevchenko Ukrainian Language School, and previously to bandura music, art and dance groups.

“The UCC will be offering all possible assistance to the community in Hamilton as its works through this difficult moment and starts to plan next steps. We are heartened that multiple organizations in Hamilton have already reached out to offer facilities as a temporary home to the rich community activity we have come to know at 241 Kenilworth Avenue — or, as many in Hamilton called it, ‘Dvista-Sorok-Odyn.’”