Let us all stand before our Risen Lord with hope, faith and charity filling our lives 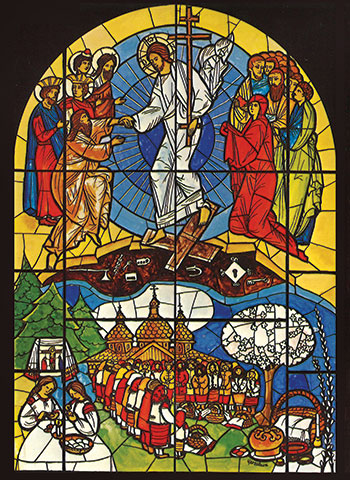 Following is the Paschal letter of the Permanent Conference of Ukrainian Orthodox Bishops Beyond the Borders of Ukraine.

CHRIST IS RISEN! INDEED HE IS RISEN!

With these powerful words of St. Gregory the Theologian from his Paschal Orations, we greet each and every one of you, dear Brother Clergy, Monastics and our beloved Brothers and Sisters in Christ in the nations of the world beyond the borders of Ukraine – in the United States of America, Canada, Brazil, Paraguay, Argentina, Great Britain, Germany, France, Belgium, Australia, New Zealand and all our faithful in other nations! We also especially greet our Brother Hierarchs, Clergy, Monastics and Faithful of the Orthodox Church of Ukraine – the autocephalous Church of the Ukrainian nation, which God has blessed by the Holy Spirit guided and thus, wise decision of His All-Holiness, Ecumenical Patriarch of Constantinople and New Rome Bartholomew I and the Holy Synod of Constantinople!

We pray the joy of our celebration amongst all of you, our spiritual children, is even more powerful today than ever before because of this powerful accomplishment – returning to the fold of Christ’s Body – the Holy Orthodox Church – millions of faithful Orthodox Christians who had been roaming in a spiritual wilderness through no fault of their own. Today they must feel the words of St. Gregory above: “We rose again with Him because we were put to death with Him,” for they had experienced what felt like spiritual death for so many decades!

“Let us give all, offer all, to Him who gave Himself a Ransom and Reconciliation for us… We needed an incarnate God, a God put to death, that we might live. We were put to death together with Him that we might be cleansed. We rose again with Him because we were put to death with Him. We were glorified with Him because we rose again with Him.” Each of us experienced this “death with Him” during our Baptism, descending in the waters of the Sacrament and rising up therefrom into new life with Him in His Body, our Holy Church. It is almost impossible to explain in simple human words, the depth of meaning behind all that God in the Holy Trinity has done for in order that we might have hope, refuge and protection throughout our lives – “The Father is my hope, the Son is my refuge, the Holy Spirit is my protection” – enabling us to survive anything utilized against us by the fallen angel to tempt us away from the Body.

Once again at this Great and Holy Feast of Pascha – The Resurrection of Our Lord – our true life is confirmed. Death is annihilated, the power of Satan has been trampled down by the One, Who could not be held captive to death, Who would be the “firstborn from the dead” (Rev. 1:5) and first in the new creation! We are meant to be heirs of the Resurrection, heirs of all things in heaven and on earth. Let us rejoice in that Resurrection! Let us live with a certainty that our Lord and Savior, Jesus Christ, has accomplished all for our salvation!

We assure you all, dearly beloved, of our prayers for you at this Pascha and every single day of life that follows. We will pray that we, together, may co-create with our Risen Lord a new world that comprehends the sanctity of life, not only of our own species, but of all species made in God’s Wisdom. We will pray that we, sooner rather than later, seek to ensure to the best of our individual and communal ability, to preserve the welfare of God’s creation. We beseech you to join us in these prayers so that we all, together, may stand before our Risen Lord with hope, faith and charity filling our lives – for the world around us and all its inhabitants.

+ Antony – Metropolitan, Ukrainian Orthodox Church of the U.S.A., South America and the Diaspora

+ Daniel – Archbishop, Ukrainian Orthodox Church of the USA and Diaspora