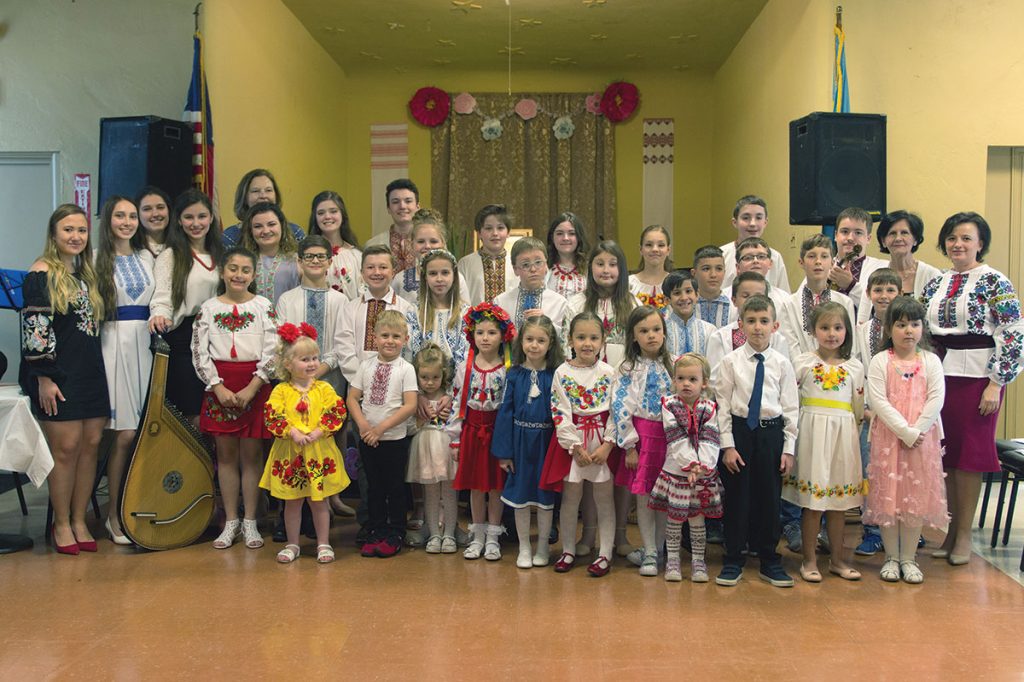 CARNEGIE, Pa. – More than 140 students, teachers, parents, and guests ranging in age from babes in arms to centenarian Mary Ann Steranka attended the concert-“zabava” (dance) celebrating the end of the 2018-2019 academic year of Ridna Shkola of Pittsburgh Inc. at the Ukrainian American Citizens Club of Carnegie, Pa., on Saturday, May 11.

Principal-teacher Oleksandra Korenov-ska welcomed all at 5 p.m. and asked the Rev. Ihor Hohosha of St. George Ukrainian Catholic Church in Pittsburgh and the Rev. Mark Swindle of Holy Ghost Ukrainian Orthodox Church in Arnold, Pa., for prayers to begin the festivities. They offered blessings for mothers, grandmothers, godmothers and spiritual mothers in anticipation of Mothers’ Day on May 12, blessed the food, and led everyone in singing “Khrystos Voskres” and “Mnohaya Lita.” Arriving later were the Rev. Jason Charron of Holy Trinity Ukrainian Catholic Church in Carnegie and Father Deacon Myron J. Spak, with their spouses.

The hourlong concert began with the assembled students of the school of Ukrainian studies singing songs about mothers and presenting recitations in Ukrainian. Then every student did an individual recitation; some also participated in small group ensembles.

The concert was embellished with singing by Maria Smereka and by Julia Zayats, duo bandura playing by Sophia Charron and Christina Hlutkowsky, and violin selections by student Maxim Milligan. Special recitations were made by about a dozen preschoolers, who indicated their readiness to become future Ridna Shkola students.

The entire concert was recorded with permission and can be listened to as a podcast at http://pittua.com/2019/317-performance-by-students-of-ridna-shkola-mothers-day.html. The podcast was produced by Dr. Volodymyr and Oksana Lernatovych, who also produce the “Ukraine in the Heart of Everyone” radio program, which also is available at the http://pittau.com/ address.

At the end of the school concert, Principal Korenovska presented the 19 students with graduation certificates. The Board of Directors of Ridna Shkola and the teachers, Halyna Charron, Sophia Charron, Yaryna Korenovska, Eryna Kurylas and Chrystyna Silecky then presented Ms. Korenovska with a large bouquet of flowers.

The program of study during the school year included Ukrainian language, literature, history and music. In addition, the students enjoyed a field trip to the Ukrainian Nationality Room and other Nationality Rooms in the Cathedral of Learning on the University of Pittsburgh campus. They sang and did recitations at the April 7 annual meeting of the Ukrainian Selfreliance of Western Pennsylvania Federal Credit Union.

Following the concert, the guests enjoyed a sumptuous buffet of Ukrainian foods and desserts, coordinated by the Parents Committee.

Dancing to live music by Nicholas Hladio and friends began at 7 p.m. and continued until 10 p.m. A varied selection of danceable songs including the “Kolomyika,” with many participants showing their dance steps, a Greek melody which filled the hall with a long line of dancers, and waltzes for the parents were played. Young Andrew Romanchik played his accordion during a break by the musicians.

Ms. Korenovska extended a huge thank you to the parents of the Ridna Shkola students for making the delicious food and desserts for the celebration and for helping and supporting the principal and teachers throughout the year.

Thanks were also extended to Greg Sembrat, president, Borys Wowczuk, secretary, and Nicholas Honchar, treasurer, of the Carnegie Ukrainian Club for use of the hall and for help in set-up and other arrangements. Additionally, Svitlana Honchar, Ukrainian National Association Secretary for Branch 96 had copies of Svoboda and The Ukrainian Weekly available for the guests, especially the new immigrant families, to read and to take home.

For information on Ridna Shkola of Pittsburgh Inc., readers may contact Ms. Korenovska, principal, at 412-708-1260.