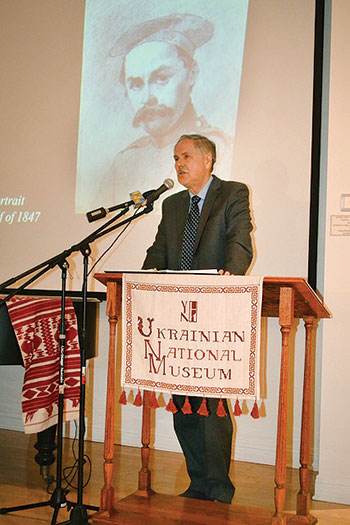 CHICAGO – In his final testament, Ukraine’s great bard and literary conscience calls on his countrymen to rip off their shackles and fight off their oppressors, then asks that his new, freshly liberated Ukrainian family mention him with a kind, soft-spoken word. But there was nothing soft-spoken about the passionate recitations and masterful strumming that so lovingly channelled Taras Shevchenko’s boisterous spirit during the commemoration at the Ukrainian National Museum of the 205th anniversary of his birth.

Voice of America bureau chief Peter Fedynsky was so deeply moved by the bard’s incisive oeuvre that he embarked on a translation of the “Kobzar” – Shevchenko’s revolutionary collection that sits on bookshelves alongside the Bible in many Ukrainian households. As a dazzling tribute to the poet who was, after all, a painter first, Glagoslav Publishers has produced a lavishly illustrated, sturdily bound gift edition. But even the accessible paperback and hardback versions available on Amazon reflect the bard’s visual, visceral writing style.

Since he was commemorating the prophetic poet’s anniversary in the Windy City, Mr. Fedynsky recited translations of poems that evoke the wind – its power to uplift or destroy, its ability to stir passive hearts and minds.

The passionate translator certainly rattled up conventional perceptions of Shevchenko with his slide show featuring contemporary depictions of the revolutionary poet.

Inspirational photos of 2013-2014 Euromaidan Revolution were peppered with the bard’s portrait displayed like a saint’s icon on the streets, stages and tents of protestors. An oil painting depicted an enraged Taras with a tire flung over his shoulder, just like those of the barricade builders who risked their lives to protest yet another corrupt, Russian-backed regime. Then, an intriguing montage: Shevchenko as Superman, Shevchenko as Elvis, Shevchenko as Einstein, Shevchenko as the Statue of Liberty, even Shevchenko as his African-American soul mate tragedian Ira Aldrige. It was all part of an eye-catching campaign to reach Ukrainian youth with a modern incarnation of Shevchenko’s timeless, universal message.

Like the 15th century itinerant blind minstrels singing epic historic ballads, modern-day kobzar Taras Yanytsky, who flew in from Kyiv, celebrated the occasion with flawlessly executed music set to Shevchenko’s lyrical repertoire about the freedom-fighting exploits of the Kozaks. Then he shared his earthy sense of humor, encouraging the audience to sing along with tongue-in-cheek folk songs.

But the bandura virtuoso also surprised the audience with a contemporary twist – the Honored Artist of Ukraine and Kyiv National University of Culture professor has elevated bandura-playing to a high art. In Mr. Yanytsky’s hands, the 65-string, five-octave chromatically tuned modern bandura resonates with avant-garde melodies and convulsive rhythms requiring 10-fingered acrobatics. His own boldly experimental compositions had the audience riveted, and his version of Hryhory Kytasky’s iconic “Echoes of the Steppes” enchanted with dynamically cinematic allure.

The mesmerizing strumming and melodic recitations synergized exquisitely throughout the evening, culminating with the singing of Shevchenko’s “Zapovit” (Testament), which Ukrainians born on either side of the Atlantic have memorized as children. Kozak spirits seemed to electrify the room, as chests swelled with pride over a country and era stored in their genetic memory.

Curator Maria Klimchak’s fascinating exhibition of portraits, posters and books dating back to 1843 made it clear to even the non-Ukrainian Chicagoans in the audience why Lyndon B. Johnson said: “He was more than a Ukrainian – he was a statesman and citizen of the world. He was more than a poet – he was a valiant crusader for the rights and freedom of men. He used verse to carry on a determined fight for freedom.”

Thanks to two spectacularly talented, passionate artists, UNM guests got a rare, raw glimpse into the Ukrainian soul reverberating with the bard’s irrefutable prediction: “Our soul shall never perish,
Freedom knows no dying.”