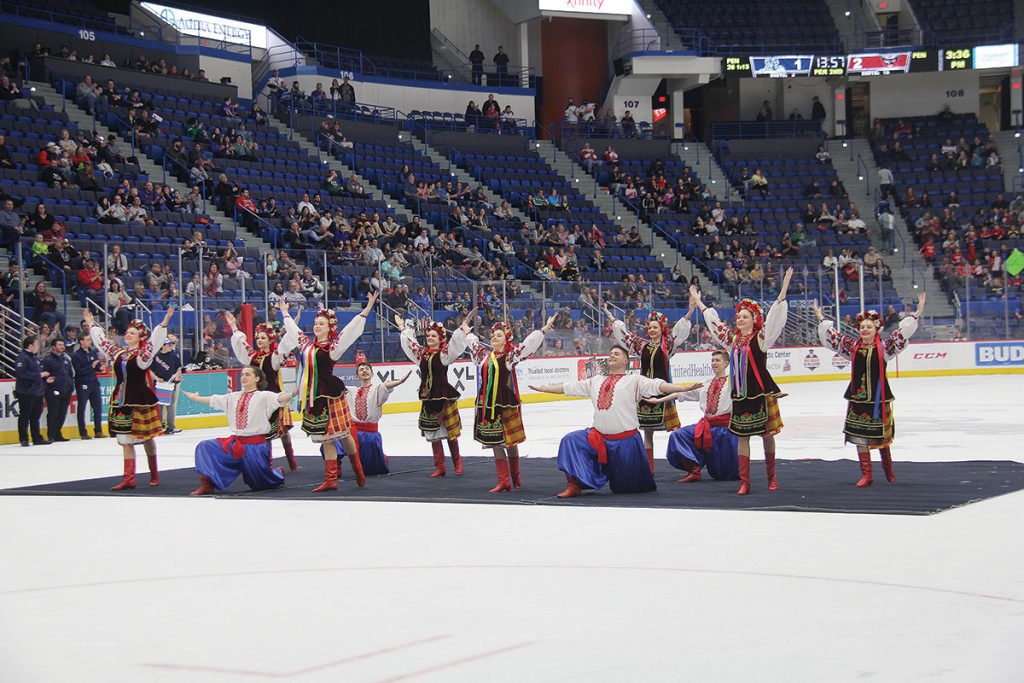 HARTFORD, Conn. – Having gotten their dancing feet wet in Newark, N.J., at Ukrainian Day at the New Jersey Devils in 2018, Hartford’s Zolotyj Promin dancers kicked up their heels a notch one year later. The XL Center in Hartford, Conn., on April 7 hosted the first-ever Ukrainian Day at the Hartford Wolf Pack, starring the aforementioned group of young Ukrainian folk dancers as solo performers.

Dancers ranging in age from 10 to 30 entertained fans of the New York Rangers’ American Hockey League affiliate prior to the start of the game in the atrium and with a second presentation at center ice during the game’s first intermission.

About an hour before the puck dropped at center ice, those arriving early were formally greeted with traditional Ukrainian bread and salt by the older group of dancers (age 14-16) performing the “Pryvit” dance in the spacious atrium area outside of the arena entrance. Next was a dance called “Molodyi Bukovynskyi,” performed by the middle group of dancers (age 10-14), followed by “Kozachok” danced by the older group. The middle group returned with its version of “Hutsulka” and the session concluded with an encore performance of the “Pryvit” for the throng of fans arriving for the 3 p.m. start of the game. The gathered crowd rewarded the young Ukrainian dancers with very enthusiastic ovations throughout the atrium performance.

While introducing the four dances, Mr. Kolinsky gave an overview of the Zolotyj Promin dance ensemble, including a brief history and the organization’s mission statement.

At the conclusion of the first period of play, a Zolotyj Promin alumni group of 12 danced the traditional Ukrainian “Hopak” at center ice. This lengthy dance featured artistic twists, leaps and pirouettes by the four young male performers, drawing most appreciative responses from the fans in the stands.

During the third period of action, Mr. Kolinsky was briefly interviewed on the arena’s jumbotron, speaking once again about the essence of the Zolotyj Promin dance ensemble and providing contact information.

Mr. Kolinsky and Ms. Nadel have already discussed plans for a second Ukrainian Day at the Hartford Wolf Pack in 2020, with the prospect of scheduling the event on a busier Friday or Saturday evening. The hope is to book bandura players, and a Ukrainian vocal group, and to have a Ukrainian sing the national anthem, Ukrainian veterans present colors, young Ukrainians ride the Zamboni during intermissions and perhaps a tribute honoring a longime contributor of the local Ukrainian community.

It is said that imitation is the sincerest form of flattery. What began in Newark several years ago has now been realized by Ukrainian communities in Edmonton (Alberta), Philadelphia, Detroit and Hartford. Super kudos and sincere thanks are due to those who initiated this concept for their foresight to publicize the Ukrainian cause via its rich cultural venues. Congratulations to those who recognized this most positive method of promoting Ukraine and had the inner fortitude to copy it.

On the ice, the home team Wolf Pack snapped a six-game winless streak by scoring five unanswered goals in a 6-2 win over Binghamton. Each squad dressed a Ukrainian skater: Hartford defenseman Darren Raddysh had an assist while Alex Krushelnyski tallied a goal and had a minor penalty for the Binghamton Devils.