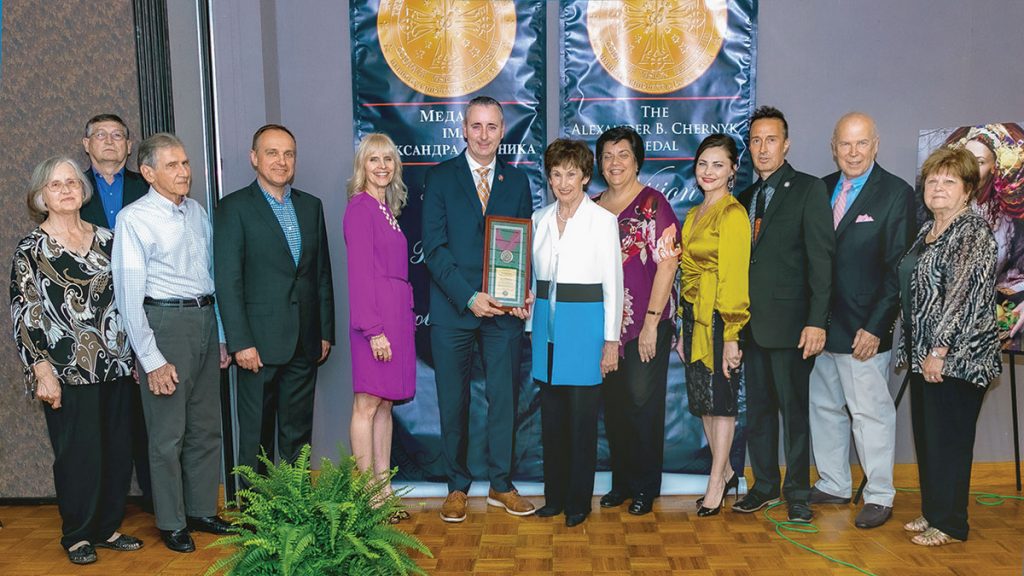 Stephan Fartuszok
The board of directors of the Ukrainian Federation of America with Congressman Brian Fitzpatrick, who is holding the Alexander B. Chernyk Medal that was presented to him for his outstanding leadership of the Congressional Ukrainian Caucus.

JENKINTOWN, Pa. – The board of directors of the Ukrainian Federation of America (UFA) held its annual award reception on May 23 in the Alexander B. Chernyk Gallery of the Ukrainian Educational and Cultural Center in Jenkintown, Pa. This year’s reception honored Congressman Brian Fitzpatrick, who is the co-chairman of the Congressional Ukrainian Caucus.

The award reception was co-hosted by two former co-chairmen of the caucus, former Reps. Jim Gerlach and Mike Fitzpatrick (older brother of the honoree). Former Rep. Charles F. Dougherty, founder and first co-chairman of the caucus, served as the MC for the evening.

Rep. Brian Fitzpatrick (R-Pa.) was being honored by the UFA for his outstanding leadership of the Congressional Ukrainian Caucus, his initiation of numerous important resolutions and statements on behalf of Ukraine, and his steadfast commitment to Ukraine’s rights to sovereignty, independence and integrity.

The Ukrainian Federation of America is a 501 (c) (3) non-profit charitable organization founded in 1991 and registered in the commonwealth of Pennsylvania and in Ukraine. The UFA develops, implements and supports programs that preserve Ukrainian culture and heritage, strengthen communities and improve the quality of life of those in need.

Rep. Fitzpatrick dedicated his entire professional life to serving and protecting others. As a special agent of the FBI, he focused on fighting corruption and supporting global counterterrorism efforts. Being an expert in the field, he was assigned to develop an anticorruption bureau in Ukraine. He spent four months working with Ukrainian counterparts on the special project to implement the vital procedures that safeguard fragile democracies. Through this project he developed a genuine interest and love for Ukraine.

Mr. Fitzpatrick was elected to the House of Representa­tives in 2016 to represent the people of Pennsylvania’s 8th Congressional District. Following redistricting in 2018, he was elected to represent the people of Pennsylvania’s 1st Congressional District, which includes all of Bucks county and a portion of northwestern Montgomery County.

Since his election to Congress in 2016, Rep. Fitzpatrick has shown a strong position on U.S.-Ukraine issues. As congressman and co-chairman of the Congressional Ukrainian Caucus and a member of the House Foreign Affairs Committee, he initiated several important resolutions on behalf of Ukraine. He co-authored bipartisan legislation to strengthen cybersecurity cooperation between the U.S. and Ukraine. Most importantly, Rep. Fitzpatrick led the effort in Congress to provide Ukraine with javelin anti-tank weapons.

Rep. Fitzpatrick is a member of the Foreign Affairs, and Transportation and Infrastructure committees. He is a founding member of the Congressional Citizen Legislature Caucus. On April 1, he was appointed by House Republican leader Kevin McCarthy to serve as a commissioner on the U.S. Commission on Security and Cooperation in Europe (CSCE) also known as the Helsinki Commission.

The evening began with members of the Voloshky Ukrainian Dance Ensemble greeting the congressman with bread and salt. Dr. Zenia Chernyk, president of the Ukrainian Federation of America, welcomed everyone and explained that the award being presented is given only to very special people who are friends of Ukraine and work to promote U.S.-Ukraine relations.

Bishop Andriy Rabiy, apostolic administrator for the Ukrainian Catholic Archeparchy of Philadelphia, started the event with a prayer, which was followed by Yulia Stupen singing “God Bless America” and the “Prayer for Ukraine.”

Consul General Oleksii Holubov of Ukraine’s Consulate General in New York read a greeting from the ambassador of Ukraine to the United States, Valeriy Chaly, congratulating Rep. Fitzpatrick for his dedicated work in Ukraine.

An earlier recipient of the Alexander B. Chernyk Medal, former Rep. Gerlach, praised the honoree and cited his dedication to his constituents in southeastern Pennsylvania. Mr. Gerlach was not only a former co-chairman of the Congressional Ukraine Caucus, but also introduced a bill to repeal the Jackson-Vanik trade restrictions that were placed on Ukraine.

A letter was read from another recipient of the Alexander B. Chernyk Medal, Rep. Brendan F. Boyle (D-Pa.). He wrote: “Congressman Fitzpatrick is a good friend of Ukraine and to the Ukrainian American community. Like Alexander Chernyk, Brian has demonstrated steadfast courage, vision and leadership through strong statements and legislative proposals for Ukraine.”

Robert A. McConnell, coordinator for external relations of the U.S.-Ukraine Foundation’s Friends of Ukraine Network, presented Rep. Fitzpatrick with a bell made by blacksmiths of the Ivano-Frankivsk region of Ukraine.

Michael Sawkiw Jr., executive vice-president of the Ukrainian Congress Committee of America and director of Ukrainian National Information Service, not only congratulated Rep. Fitzpatrick for his work but also praised the Ukrainian community in the area for its dedication. “We as a community generate help for Ukraine in its fight against corruption,” he noted.

Eugene Luciw, president of the Philadelphia chapter of the UCCA, spoke of the congressman’s vision, courage and leadership.

Roman Petyk, chairman of the board of directors of the Ukrainian Federal Credit Union (UKRFCU), thanked all guests in attendance. UKRFCU was a major sponsor of the event; other sponsors were Net Cost and an anonymous donor.

Mr. Dougherty, who served as MC, spoke of the situation in Ukraine and the dire need for help at this moment in time. He noted that Rep. Fitzpatrick is the only man he ever met who had walked the streets of Kyiv before he walked the halls of Congress.

After Dr. Chernyk presented the Alexander B. Chernyk Medal, Rep. Fitzpatrick spoke of his love for Ukraine: “I’m Irish and I’m traveling to Ireland and in August to Ukraine with Brendan Boyle. … I love Ukraine as much as Ireland.” He said that during his time in Ukraine he had formed a special bond with the younger generation hungry for change. “They need a voice, and I promise to be that voice,” he stated.

After the ceremony, guests were invited to a beautiful reception. Guests enjoyed speaking with Rep. Fitzpatrick, wishing him well and sharing their dreams for Ukraine. Everyone indulged in the delicious buffet, walking away only to snap a quick photo with the congressman.