Discussion in New York: The Ukrainian-Jewish relationship within historical contexts 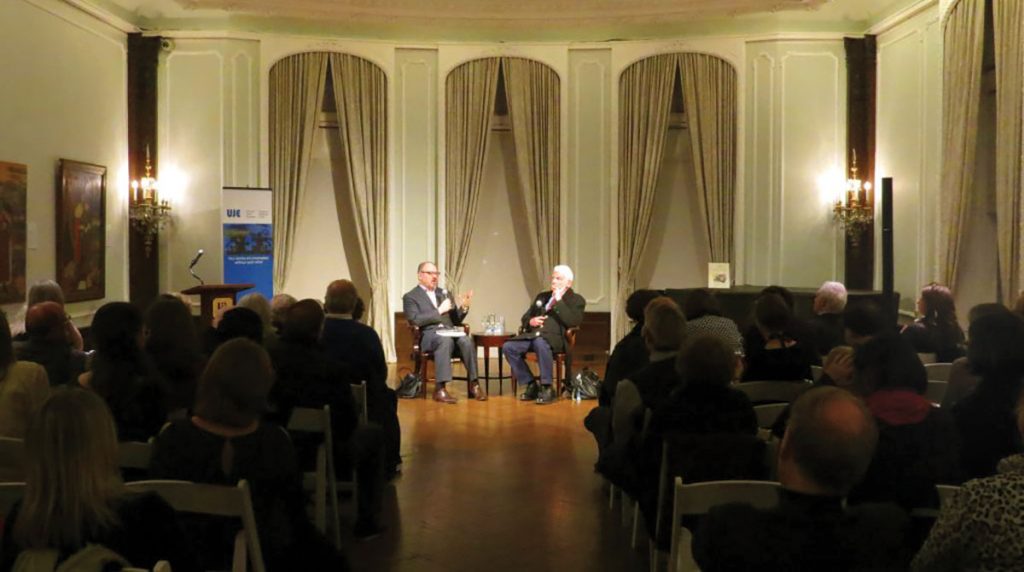 NEW YORK – The historic development of the Ukrainian-Jewish discourse, the need for a greater understanding of history and its contexts, as well as the current political situation in Ukraine were discussed during a wide-ranging conversation that took place recently at the Ukrainian Institute of America in New York.

The event, sponsored by the Institute and the Ukrainian Jewish Encounter, focused on a lecture by Dr. Paul Robert Magocsi on the book “Jews and Ukrainians: A Millennium of Co-Existence,” which he co-authored with Dr. Yohanan Petrovsky-Shtern. Adrian Karatnycky, a co-director and board member of the UJE, was the event moderator.

Prof. Magocsi is also a UJE board member, as well as professor of history and political science at the University of Toronto, where since 1980 he has held the Chair of Ukrainian Studies.

The lively two-hour lecture and discussion on March 28 touched on a number of important issues related to how Ukrainians and Jews from Ukrainian lands view each other.  These issues have provided a complex yet fascinating framework for understanding the development of that relationship over the centuries.

Prof. Magocsi identified one of the key components as “territory” because it affected both Ukrainian and Jewish self-identification.

“Ethnic Ukrainians consider their historic homeland to have always been Ukraine, a territory which only in the course of the 20th century became a clearly defined and eventually independent state,” he said. “On the other hand, the Jews in question are part of a worldwide diaspora, one branch of which, called Ashkenazim, had until recently inhabited large parts of central and eastern Europe, including areas which – from their perspective – have only recently “become” Ukraine… Various regional and country names do, nonetheless, reflect real differences within what we are defining here as Ukrainian Jewry.”

Prof. Magocsi outlined the different empires and states that have ruled the Ukrainian lands and the respective conditions under which Ukrainians and Jews lived.  This affected how Jews, who were the focus of the lecture, were able to develop in different categories within society.

“When the Russian and Austro-Hungarian empires ceased to exist in the last years of the First World War (1917-1918), the Jews of present-day Ukraine found themselves in four new states: the Soviet Union, Poland, Romania and Czechoslovakia,” he said. “Those in the former Russian Empire were now in the Bolshevik-ruled Soviet Ukrainian Republic… Soviet policies had both a positive and negative impact on their lives. Religious Jews and their institutions were persecuted, and petty merchants and retail shop owners were put out of business. On the other hand, Soviet law lifted all legal restrictions from the tsarist era against Jews as a group, with the result that hundreds of thousands were able to make successful careers in Soviet institutions, whether in government, university, scholarly research or industrial management sectors.”

He noted that several conclusions could be drawn from the intersection of territory and history on Jews themselves.

“The first conclusion has to do with the very formulation, ‘Ukrainian Jewry.’ If we are to use that concept as an analytical tool, then we must accept the fact of Ukraine’s regional diversity and its significant impact on the country’s Jewish inhabitants… A somewhat related conclusion – and recommendation – is what I would suggest is the need to move away from the simplistic notion that the historic past of Eastern European Jewry is little more than the story of unmitigated tragedy.”

Following Prof. Magocsi’s presentation, Mr. Karatnycky noted it was important to keep in mind several important factors when looking at the Ukrainian-Jewish relationship. Historically, Ukraine has been the cradle of Hassidism. The Polish-Lithuanian Commonwealth, which incorporated much of Ukraine, was the only place where Hebrew-language books were published (in the contemporary western Ukrainian town of Zhokva). Ukraine was the home of great literary Yiddish-language literary figures, like Sholem Aleichem. And it was a land ravaged by the Holocaust.

During the second world war, over 1.5 million Jews were shot to death during what has become known as the “Holocaust by Bullets.” At the same time, it was important to remember that 5 million non-Jews in Ukraine during the war years perished as prisoners of war, fought the Nazi occupation on the Soviet side, and were part of the resistance.

Mr. Karatnycky also pointed out that historically there were good relations between a number of important Ukrainian and Jewish figures. He noted that the Zionist leader Vladimir (Ze’ev) Jabotinsky was supportive of the Ukrainian desire for self-determination.

When looking at the relations between the two peoples, Mr. Karatnycky said it was important to consider the historical context in which events occurred, and to recognize commonalities. For instance, when discussing the relationship between Jews and Bolshevism, it is often overlooked that there were Jews who themselves were oppressed on religious, linguistic and other grounds.

A spirited discussion took place after the lecture – a discussion that included the prevalence of stereotypes and the much-debated issue of the extent of Ukrainian collaboration with the Nazis during World War II.

“Did ethnic Ukrainians and did peoples of other backgrounds in Ukraine contribute to the arrests, and minimally assist the invading German forces in Ukraine that had singled out Jews and other undesirables for liquidation? Did some of the population assist? Of course they did. We knew that a long time ago,” Prof. Magocsi said.

Ukraine’s transparency and willingness to open its archives has provided an environment for particularly younger historians to investigate the country’s past anew. “The question of why it happened, how it happened and [what]percentage is now being investigated, because before you couldn’t look at it,” Prof. Magocsi said.

To that end, both the Prof. Magocsi and Mr. Karatnycky cautioned that historical context and balance are important.

“If we’re going to look at the liquidation of Jews, we have to look at others, like [Metropolitan Andrey] Sheptytsky, who went out of their way to save [Jews] at great risk to their life,” said Prof. Magocsi.

Mr. Karatnycky pointed out many people are not aware that Stepan Bandera, the Ukrainian nationalist leader who has been often criticized by the Jewish community, was arrested by the Nazis and sent to the Sachsenhausen concentration camp for refusing to rescind his 1941 decree proclaiming Ukrainian statehood after Nazi Germany invaded the Soviet Union. Thousands of his followers were executed by that same regime.

“These questions are being discussed with greater sophistication today in Ukraine,” said Prof. Magocsi.

Natalia A. Feduschak is director of communications of the Ukrainian Jewish Encounter, a Canadian non-profit dedicated to deepening understanding of the breadth, complexity, and diversity of Ukrainian-Jewish relations over the centuries, with a view to the future.