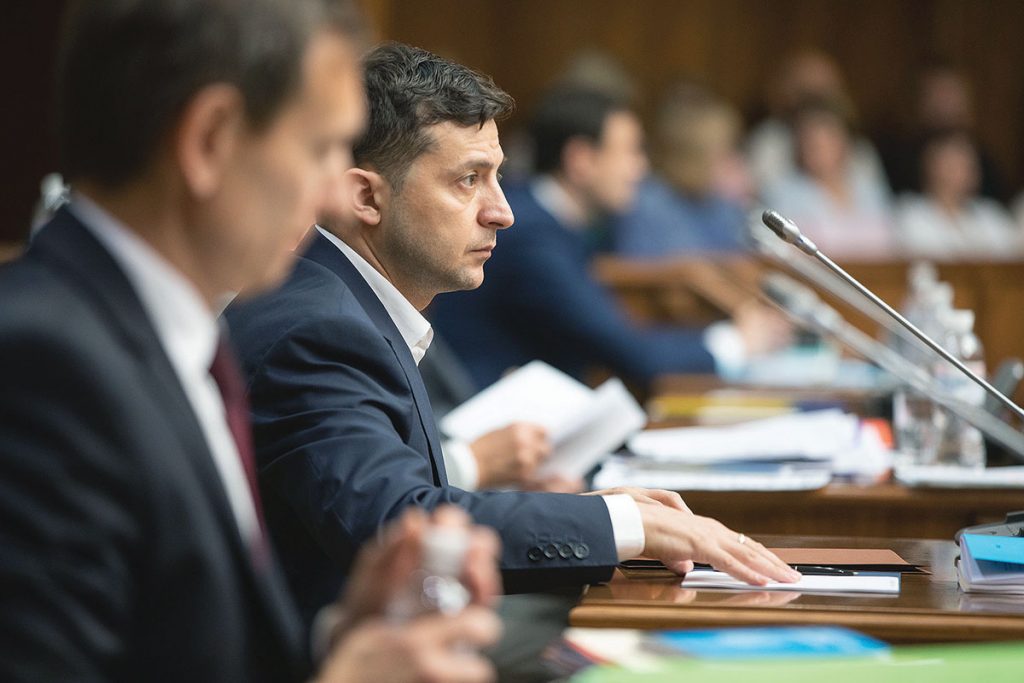 Presidential Administration of Ukraine
President Volodymyr Zelenskyy addresses the Constitutional Court of Ukraine on June 11 in Kyiv. The judicial body started hearings on the same day to determine whether the president’s May 21 decree calling for pre-term parliamentary elections is compliant with the Constitution.

KYIV – Constitutional Court hearings started this week on whether President Volodymyr Zelenskyy’s decree to call pre-term parliamentary elections for July 21 are in compliance with the supreme law of the land.

Addressing the panel of 18 judges on June 11, Mr. Zelenskyy eschewed legal arguments for his May 21 decree and instead cited public sentiment.

He said many factors point to the “spirit of the law,” including low public trust of the legislature and popular support for dissolving the Verkhovna Rada.

“Society is very closely following this matter… and I think you will make a fair decision, of which we won’t be ashamed before our people, all of Ukraine and our children,” Mr. Zelenskyy said.

Referring to his lawyer, the president said his legal position is “indisputable and flawless” – one that he would prove in court. The main reason for calling snap elections is the absence of a governing coalition, he argued.

The hearing lasted all day as judges queried the president’s attorney on the specifics of an existing governing coalition.

After his opening statement in the morning, Mr. Zelenskyy left the courtroom, saying he didn’t want to pressure the panel’s hearing or its ensuing deliberation. A ruling is expected at the latest by the end of this month.

The current Verkhovna Rada has so far voted not to dismiss the sitting minister of defense and foreign affairs and the chief of the Security Service of Ukraine (SBU), all of whom have resigned. It also didn’t vote for the president’s bill against illegal enrichment of public officials, a key requirement of international lenders and donors.

Lithuanian-born Aivaras Abromavicius, who was an economy minister in the post-Euro-Maidan government, was appointed to the supervisory board of the state-run defense and arms conglomerate Ukroboron­prom. The umbrella company manages over 100 enterprises in five major defense industry sectors, yet is subject to little public scrutiny despite the fact that about 5 percent of the country’s yearly economic output of $100 billion is spent on defense.

The president signed a submission to Parliament to dismiss Prosecutor General Yuriy Lutsenko. He also appointed Vladyslav Bukhariev to head the SBU’s foreign intelligence department. A national deputy within the Batkivshchyna party, Mr. Bukhariev lists a medal from Russia’s chief spy agency, the Federal Security Service, for “military cooperation,” in his political biography.

In a Facebook post in 2014 during the last parliamentary election campaign, Mr. Bukhariev said he received a certificate of distinction from the U.S. Drug Enforcement Administration for his role in disrupting an international drug network while serving in the SBU in cooperation with Russia, the U.S. and other countries more than a decade ago.

He earned the equivalent of $31,000 last year, yet gave his daughter more than $570,000 worth of gifts, according to his income and asset declaration.

Fifteen oblast governors were dismissed by the president. Ukraine has 24 oblasts – administrative regions – along with the autonomous region of Crimea, and the cities of Kyiv and Sevastopol that hold “special status.”

Party lists firm up ahead of election

Political party congresses took place over the weekend and Monday ahead of next month’s Verkhovna Rada elections.

Polls suggest that five parties – three pro-Western, one populist and one pro-Kremlin – are expected to pass the five-percent barrier for half of the 450 parliamentary seats based on a proportional voting system. Voters will only see the first five names of party lists on ballots, however. Some parties, however, have revealed the names of more candidates, sometimes up to 100. However, that doesn’t mean the same ones will be registered with the Central Election Commission by the June 25 submission deadline.

The other half of the chamber is elected in single-mandate districts based on simple-majority voting.

The president’s pro-Western Servant of the People party may capture nearly 49 percent of decided voters based on a nationwide survey that the Kyiv International Institute of Sociology released on June 10. Its platform calls for legislation stripping the State Fiscal Service of police powers and the SBU of its power to investigate financial crimes. Included in its program is removing prosecutorial immunity from Rada deputies and confiscating property from corrupt officials. It also wants to provide a one-time amnesty on unexplained wealth.

Regarding the defense sector, Mr. Zelenskyy’s party’s platform wants to make punishment harsher for corruption in the Armed Forces.

Dmytro Razumkov, who was the president’s political adviser during the presidential race, heads the party list. Ruslan Stefanchuk, the party’s ideologist, is second, while judicial reform expert Iryna Venediktova is third. Women comprise a quarter of the top 20 on the party list.

The pro-Russian Opposition Platform-For Life party is polling in second with 12 percent support.

It wants to “bring peace… and restore stability” to the country, its founding member and current lawmaker Yuriy Boiko said at the party congress on June 6. A former energy minister under President Viktor Yanukovych, he heads the list, followed by lawmaker Vadym Rabinovych, Viktor Medvedchuk (Russian President Vladimir Putin is godfather to his daughter), Luhansk oblast native Nataliya Korolevska, a lawmaker of the Russia-friendly Opposition Bloc, and Serhiy Lyovochkin, a lawmaker who headed Mr. Yanukovych’s Presidential Administration in 2010-2013.

Batkivshchyna has already announced it won’t be in opposition and wants to form a coalition with Servant of the People. Its platform has mostly populist overtones. It calls for a different format of negotiating peace in the Russo-Ukraine war, strengthening the armed forces (a policy that the previous president and current Parliament have mostly pursued), NATO accession, combating corruption, providing more direct government decision-making power to the public, improving the rule of law, and more economic rights for businesses.

Polling fifth with 6 percent is the party of perhaps Ukraine’s most prominent rock star, Svyatoslav Vakarchuk, which is called Holos Zmin (Voice of Change). Also a onetime lawmaker and the first to voluntarily resign, Mr. Vakarchuk said the party “won’t work in a coalition with political forces that don’t agree that Europe is Ukraine’s choice, that will defend oligarchs, that do not share the principle of equality before law and that do not want to make the authorities accountable to the public,” according to an Interfax-Ukraine report.

“The rest can be negotiated,” Mr. Vakarchuk added.

At the June 8 party convention, it was decided that he will head the list, followed by Yulia Klymenko, former deputy minister of the economy (2014-2016), information technology expert Kira Rudik, whose employer was bought by Amazon for $1 billion last year, Kyiv School of Economics professor Yarsolav Zhelezniak and Oleksandra Ustinova, who last served as a board member of the Anti-Corruption Action Center.

Update on the war

Eight Ukrainian soldiers were killed from June 1 to 11, bringing the total death toll this year to 59 and more than 13,000 since the Russo-Ukraine war began in February 2014.

Threats increased starting in February 2014, when Russia invaded Ukraine. Most recently, a bomb threat was called in to the Constitutional Court hearing on June 11 during oral arguments on holding early elections.

In related news, European Union ambassadors on June 12 extended sanctions on Russia that stem from its illegal 2014 annexation of Crimea, a decision that EU foreign ministers must first confirm later this month, according to a tweet by former U.S. Ambassador to Ukraine Steven Pifer.