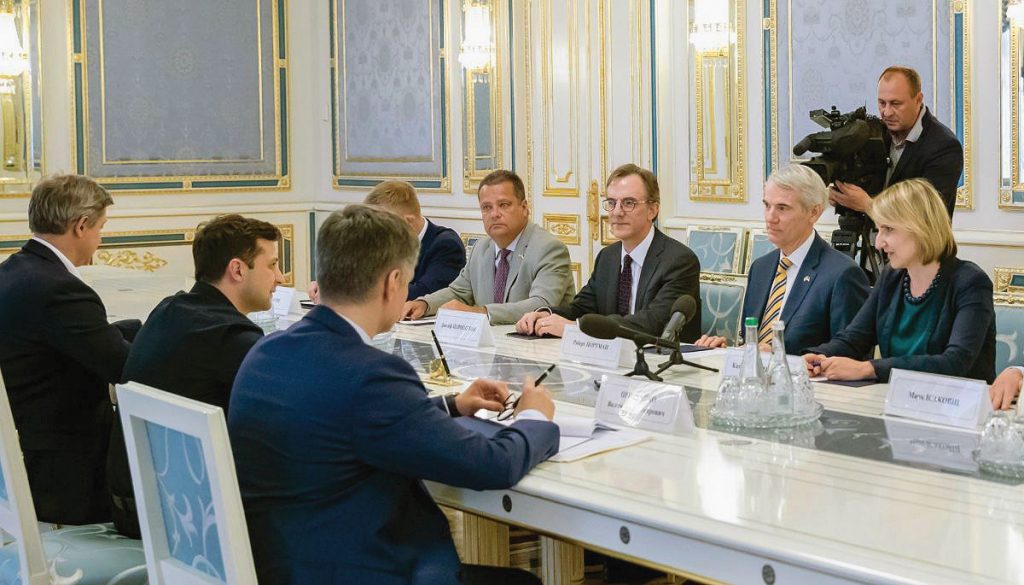 Ukrainian Weekly Editor | The Ukrainian Weekly | Subscription
During a meeting in Kyiv between the U.S. delegation led by Sen. Rob Portman and President Volodymyr Zelensky of Ukraine.

Joining Sen. Rob Portman at several official meetings was his constituent, Andriy Futey, president of the Ukrainian Congress Committee of America (UCCA,) the national umbrella organization that has represented the interests of Americans of Ukrainian descent since 1940. Most notably, Mr. Futey participated in the senator’s meeting with President Volodymyr Zelensky; the secretary of the National Security and Defense Council of Ukraine, Oleksandr Danylyuk; and the deputy head of the Presidential Administration, Vadym Prystaiko.

“It was a distinct honor and privilege to accompany the co-chair of the Senate Ukraine Caucus during his visit to Kyiv. By including the UCCA in these high-ranking meetings, the senator demonstrated the strong partnership with our Ukrainian American community and the importance of our organization,” said Mr. Futey.

The UCCA president added, “I was very encouraged that Sen. Portman touched on initiatives being undertaken by President Zelensky which were raised in my previous meeting with him earlier this month, including implementing reforms that should bring Ukraine closer to the EU and NATO.”

Mr. Futey had earlier attended the inauguration of President Zelensky and met with him in Kyiv on May 21, along with Ukrainian World Congress President Paul Grod, to outline priorities for supporting Ukraine in its battle with Russia’s military aggression, promoting the economic development of Ukraine and strengthening the ties binding all Ukrainians wherever they may live to create one powerful voice.

Sen. Portman has visited Ukraine on several occasions and continues to be actively engaged with ongoing political, economic and military developments in Ukraine. Sen. Portman is also the co-founder of the Senate Ukraine Caucus; on October 19, 2016, he received the UCCA’s Shevchenko Freedom Award.