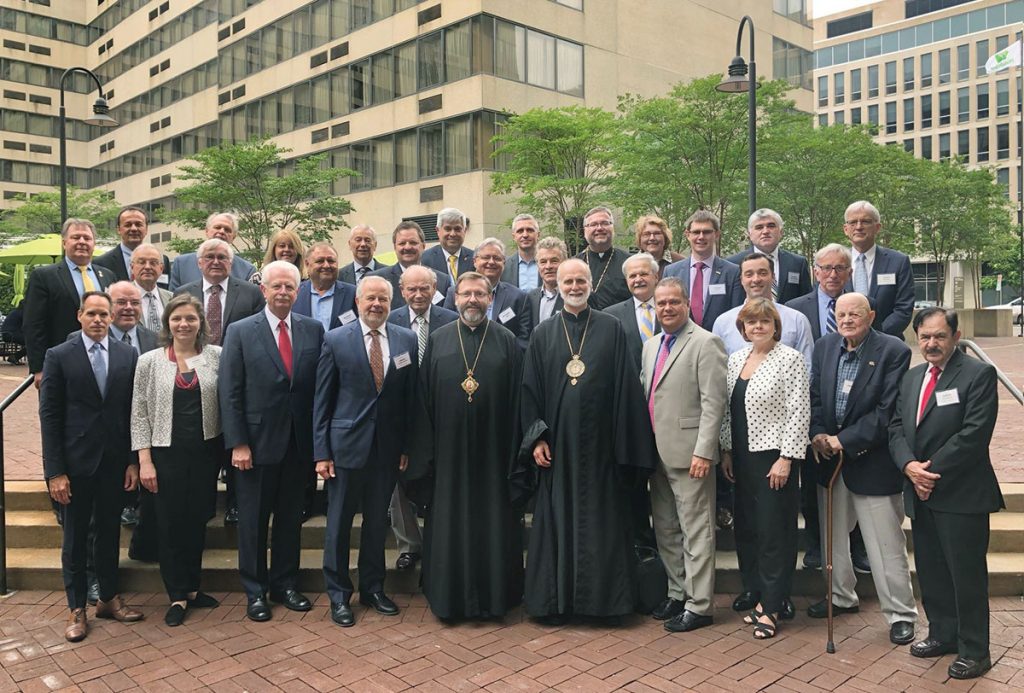 Thirty participants representing 12 Ukrainian American credit unions in the U.S. gathered to lobby their legislators on Capitol Hill, attend presentations on current topics of interest to credit union leaders and elect a new board of directors.

Following the briefings, delegates proceeded to Capitol Hill to lobby their respective elected officials, emphasizing the important issues discussed during that morning’s briefing.

A reception was held that evening for delegates.  Special guests included a delegation of six Plast leaders from Ukraine, who were invited to the U.S. by the Open World Leadership Center to discuss scouting and youth leadership with participants from other countries.  Attending the evening reception were Plast Ukrainian Scouting Organization leaders from the local Washington area as well. This encounter provided a wonderful opportunity to network with the Ukrainian community and to present the current scouting scene in Ukraine to the credit union leaders.

The program on Friday, June 7, began with welcoming remarks by Andrij Horbachevsky, UNCUA chairman.  Special guest Paul Grod, president of the Ukrainian World Congress, spoke on the vision of the world diaspora and the role of credit unions in its implementation.

Presentations on topics of interest to the credit union industry followed by representatives of the Federal Reserve Bank, the National Association of Federal Credit Unions and the U.S. Secret Service.  Mr. Bohdan Shevchik, chair of the Association of Government Accounts Emerging Technology Working Group, provided participants with an emerging technology update on robotic process automation, data analytics and blockchain.

Tamara Denysenko, board member and former CEO of Ukrainian Federal Credit Union in Rochester, facilitated a roundtable discussion focused on a look to 2020 and beyond; in service to members and communities.

The credit union leaders were extremely honored on Friday afternoon with a special visit by Patriarch Sviatoslav of the Ukrainian Greek-Catholic Church and newly enthroned Metropolitan-Archbishop Borys Gudziak.  Both prelates addressed the delegates, joined them for lunch, and posed for a group photo prior to attending their next appointment in Washington.

On Saturday, June 8, the Association conducted its 38th annual meeting, which included reports by management and various committees.  The election of board members for the 2019-2020 term was also held on Saturday.

UNCUA Chairman Horbachevsky reported on his activities for the past year, and Orysia Burdiak, president, reported on the work of the staff.

The 2019 credit union calendar was dedicated to classic Ukrainian paintings of Mykola Pymonenko and Volodymyr Orlovsky.  Approximately 27,000 calendars were distributed to credit union members in the United States this year.

The following individuals were elected to the 2019-2020 UNCUA Board of Directors and committees:

Ms. Burdiak was elected president of the Association and the Ukrainian Cooperative Insurance Agency in Chicago. Agency staff members are Christine Pylypowycz and Nina Bebko.