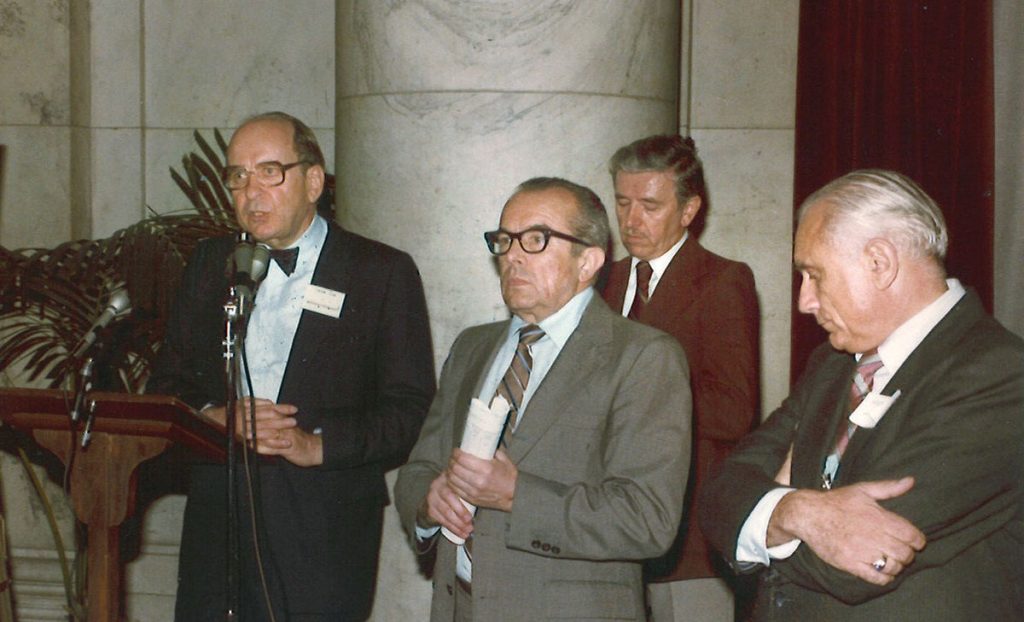 Natalie Sluzar, and archives of Svoboda and The Ukrainian Weekly
UNA Supreme President John O. Flis speaks at the reception. To his left is UNA Supreme Secretary Walter Sochan.

On the receiving line composed of UNA executive officers and a representative of the UAC were: Supreme President John O. Flis, Supreme Vice-President Myron B. Kuropas, Supreme Vice-Presidentess Gloria Paschen, Supreme Secretary Walter Sochan, Supreme Treasurer Ulana Diachuk and Supreme Organizer Stefan Hawrysz, as well as Robert McConnell of the UAC. Also present were members of the UNA Supreme Assembly, who arrived by bus from Soyuzivka, where they were meeting at their annual session.

The atmosphere of the reception was that of an informal get-together with much mingling, hand-shaking and conversation. There were no speeches, only concluding remarks by UNA President Flis, who expressed the Ukrainian community’s appreciation to members of Congress for their support of Ukrainian causes and issues of concern to the Ukrainian community – especially for those measures benefitting “our brethren in Ukraine, who do not enjoy the same freedoms as we in the United States do.”

Thanks to Olga Karmazyn, the unidentified bowler in the UNA “Snapshot from history” of June 2 has been identified. He is Andrew Rusinko of UNA Branch 120 of Aliquippa, Pa. Ms. Karmazyn was responding to our request to help ID the one person in the photo from 1966 who was not named. The photograph was from the first UNA national bowling tournament held on April 29-30 1966, in Aliquippa. The name has now been inserted into the caption information of our online edition and on the UNA’s Facebook page. Thank you to this loyal reader!