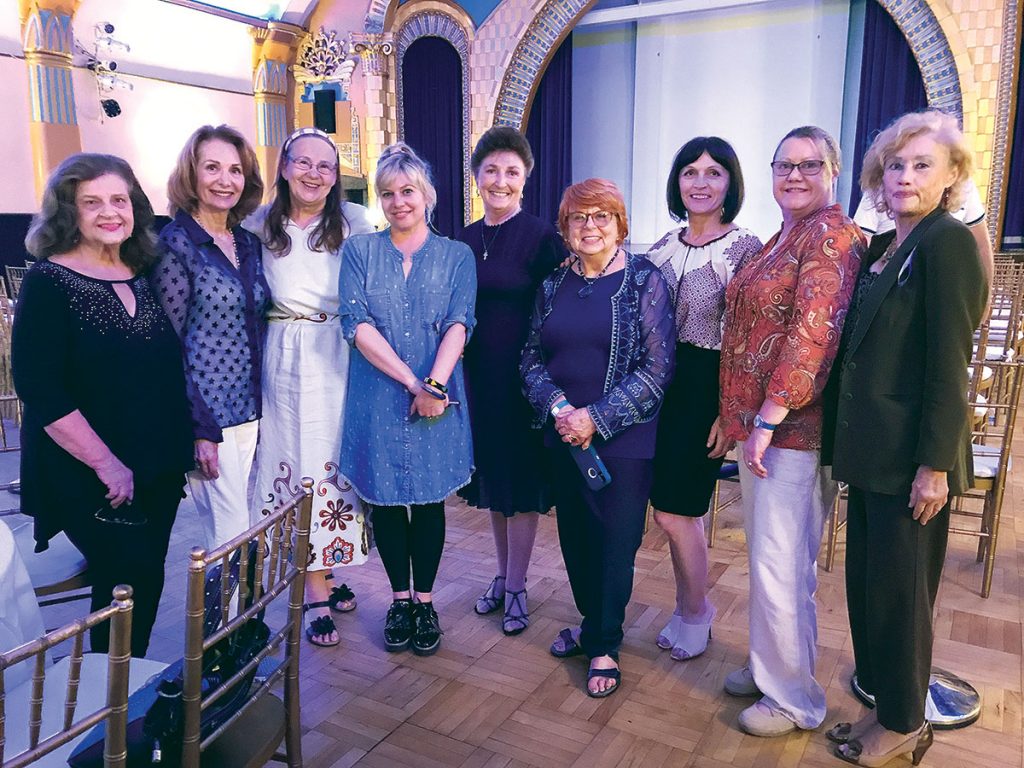 V. Lewis
The Ukrainian Art Center’s board of directors with Roxy Toporowych (fourth from left), writer-director of the film “Julia Blue.”

The highly anticipated event, attended by writer-director Ms. Toporowych and producer Niou Safinya as special guests of the Art Center, was organized by Luba Keske, a member of the Ukrainian Art Center board and associate producer of the film.

Following a brief reception, the audience, which included a number of independent filmmakers, settled down as Ms. Keske introduced Daria Chaikovsky, president of the Ukrainian Art Center. Ms. Chaikovsky welcomed the special guests, who flew in from the Kyiv Molodist Film Festival, and the audience. She thanked the Ukrainian Culture Center board and its president, Walt Zozula, for providing the beautiful venue. Ms. Chaikovsky invited everyone to stay after the screening and enjoy the post-premiere reception and the question and answer session with Ms. Toporowych and Ms. Safinya.

“Julia Blue,” which stars Polina Snisarenko and Dima Yaroshenko, was filmed entirely in Ukraine with Ukrainian actors and crew. Principal photography was completed in October 2015, and the film was edited in New York.

In brief, the film tells the story of Julia, a photojournalist, student and volunteer at a military hospital, living in today’s war-torn Ukraine who finds her path towards independence and a brighter future challenged after meeting and falling for “English,” a young, wounded soldier fresh from the war zone in eastern Ukraine.

As the filmmakers watched the film with guarded enthusiasm, the 89 minutes passed, the credits rolled, and the audience responded with a standing ovation.

Prior to commencing the Q & A session, Ms. Chaikovsky expressed gratitude on behalf of the Ukrainian Art Center board to the filmmakers for choosing Los Angeles to premiere “Julia Blue” in southern California, wished them continued success, and thanked them for the stunningly realistic portrayal of Ukraine, its people and culture.

The audience then presented a variety of questions: What was your inspiration in writing this story? Whose house was used in the Carpathian Mountain scenes? Will there be a sequel?

Among the comments by the audience: “The film beautifully depicts contemporary Ukraine and her people.” “Great performance by the leading actors. The young soldiers in the military hospital were very believable.” “Excellent cinematography and editing. The writing and directing by Roxy were spot on.” “One of the best films I have seen… wonderful!”

Indeed, this contemporary film perfectly captures the modern city of Kyiv, its streets and charming alleyways, memorializes the Maidan – Independence Square, and depicts what life is truly like in the beautiful, lush Carpathian Mountains.

The filmmakers are currently looking for a distributor as they continue to hold special screenings for the Ukrainian communities.