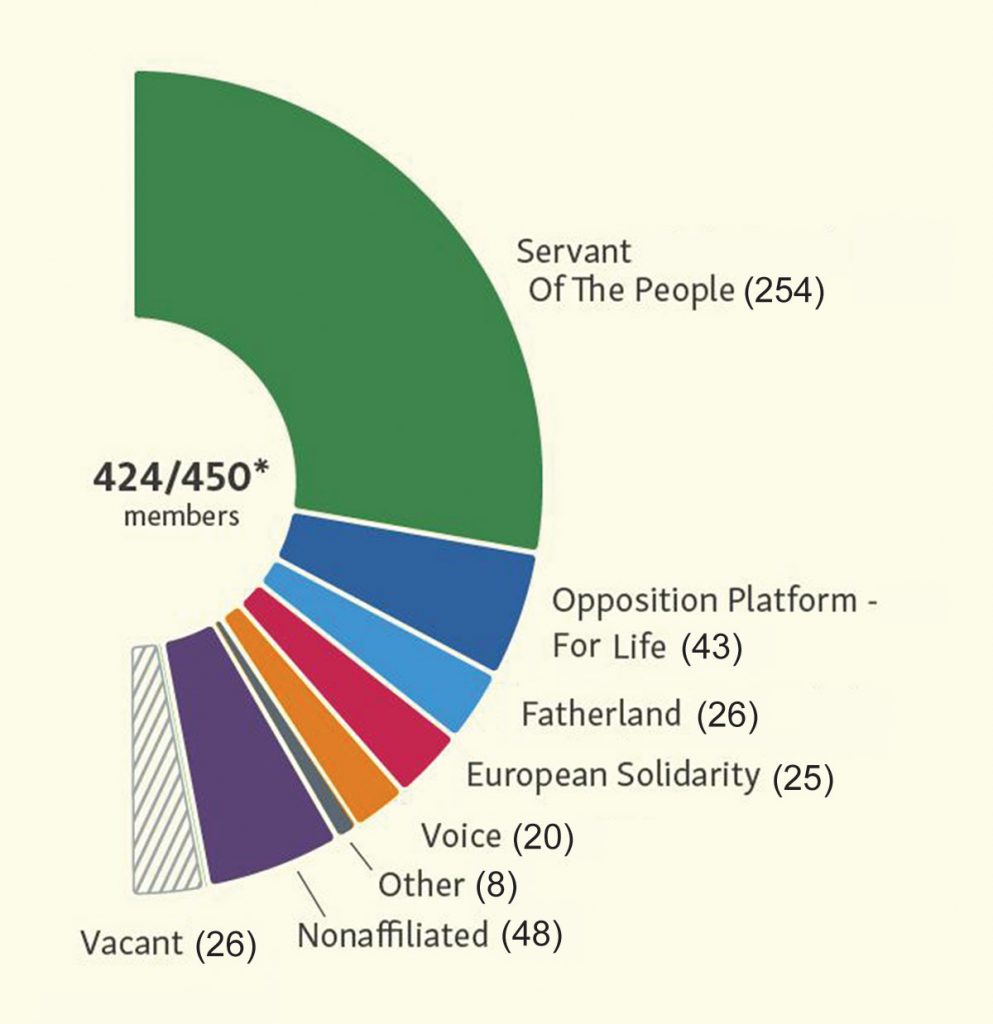 Ukrainian Weekly Editor | The Ukrainian Weekly | Subscription
THE NEW VERKHOVNA RADA: Infographic by RFE/RL shows the number of seats in the Verkhovna Rada won by parties. (NB: 26 seats are vacant because of the Russian occupation of those territories.)

KYIV – The results of Ukraine’s July 21 snap parliamentary election have continued the biggest political shake-up in independent Ukraine’s history. Political newcomer Volodymyr Zelenskyy’s recent landslide victory in the presidential election has been replicated by a win on a historic scale by his party, Servant of the People.

As predicted by opinion and exit polls, Servant of the People won a clear majority, the first time any party has achieved such a dominating position in the Verkhovna Rada. Servant of the People captured 254 of the 424 seats being contested (26 of the Parliament’s 450 seats remain unfilled because elections could not be held in areas occupied by Russia). It won 124 seats in voting for party lists and another 130 in single-mandate constituencies.

Servant of the People also broke another record. The party won just over 43 percent of the votes in the voting by party lists, beating the record 34.7 percent set by the Party of Regions in 2007.

The four other parties that managed to pass the 5 percent threshold and get into the Verkhovna Rada lagged far behind. The pro-Russian Opposition Platform – For Life (Oppozytsiyna Platforma – Za Zhyttia) did somewhat better than expected and secured a total of 43 seats (including voting for political parties and in single-mandate constituencies). Yulia Tymoshenko’s Batkivshchyna (Fatherland) party narrowly beat former President Petro Poroshenko’s European Solidarity into third place: Batkivshchyna obtained 26 seats to European Solidarity’s 25. And rock star Svyatoslav Vakarchuk’s party Holos (Voice) managed to just get in, winning 20 seats.

Voter turnout, at 49.84 percent, was the lowest so far in all of Ukraine’s parliamentary elections since 1991.

The final configuration within the new Parliament will only be known after the 46 independent candidates, and 10 representing other parties who were elected, indicate with whom they will align. Servant of the People will have no problem producing the 226 votes required for ordinary majorities in voting within the Verkhovna Rada, but will need 300 votes in the case of constitutional amendments.

Being in such a strong position, Servant of the People does not need to form a formal coalition with any other party, which would tie its hands somewhat in deciding whom to propose for prime minister, as well as the parliamentary speaker, deputy speakers and heads of committees. The party’s leader, Dmytro Razumkov, has made this clear and kept his still hopeful potential partners – Holos and possibly Batkivshchyna – waiting.

One of the surprises was that Servant of the People did even better than it had expected in the 199 single-mandate constituencies traditionally associated with corruption and the “buying” of votes. Many of the most controversial national deputies were defeated by Mr. Zelenskyy’s political newcomers. In fact, Servant of the People broke another Party of Regions record, winning 130 of the single-mandate constituencies compared with 113 won by former President Viktor Yanukovych’s party in 2012.

Mr. Zelenskyy’s party took all the single-mandate seats in the capital, and Mr. Razumkov wasted no time in calling on the government to cooperate with the president in replacing Vitali Klitschko as head of the Kyiv City State Administration (an appointed position that is different from the elected position of mayor).

Servant of the People came first in all but three regions. In Lviv, Holos pushed the party into second place. This itself was major upset in a region that had strongly backed Mr. Poroshenko in the presidential election. It also confirmed the party as a nationwide force whose appeal is not limited to any specific region. In the Donetsk and Luhansk regions, Servant of the People was second after the Opposition Platform – For Life.

The big losers were, first and foremost, some of the political parties that were prominent in Ukrainian politics after the Revolution of Dignity. The People’s Front, led by Arseniy Yatsenyuk, which gained the most votes in the parliamentary election in 2014, has disappeared completely. Its coalition partner, the Petro Poroshenko Bloc, newly reconstituted as European Solidarity, which won 132 seats in 2014, now has 25. Batkivshchyna has managed to increase its seats from 19 in 2014 to 26. Samopomich (Self Reliance), led by Lviv Mayor Andriy Sadovyi, and Oleh Lyashko’s Radical Party, which formerly had 33 and 22 seats, respectively, failed to cross the 5 percent threshold.

Despite the war with Russia and the occupation of Crimea and the eastern Donbas where they enjoyed support, the pro-Russian forces have improved their position. The Opposition Bloc, reconstituted from the Party of Regions, won 29 seats in 2014. It split last year, with the breakaway Opposition Platform – For Life, led by Yuriy Boyko and Viktor Medvedchuk, taking center stage. The latter has captured 43 seats. Meanwhile, the Opposition Bloc failed to get into the Parliament, securing about 3.5 percent of the votes.

Among the losers from the reformist camp are several of the best-known young liberal activists who emerged during the Revolution of Dignity, some of whom unsuccessfully sought to create a new Democratic Alliance. They include Serhiy Leshchenko, Svitlana Zalishchuk and Leonid Yemets; Mustafa Nayyem and Hanna Hopko did not run.

Some observers were surprised that the political parties led Anatoliy Hrytsenko and Ihor Smeshko, both of whom did reasonably well in the presidential election, failed to cross the 5 percent threshold. This also was the case with the parties led by Volodymyr Groysman and Mikheil Saakashvili, and the far right Svoboda. Another surprise was that a new party hastily established by a controversial blogger living in Europe as a self-declared political refugee, Anatoliy Shariy, managed to win 2.3 percent of the votes, overtaking even Svoboda.

On the other hand, the election purged the Verkhovna Rada of many of the main controversial and seemingly immovable figures accused of being anti-Ukrainian, corrupt, auxiliaries of the oligarchs and/or anti-reform. They include Serhiy Kivalov, Borys Kolesnikov, Dmytro Dobkin, Boryslav Rozenblat, Serhii Pashinsky, Ihor Kononenko, Serhii Kaplin, Volodymyr Lytvyn and numerous others. The discredited former military pilot Nadiya Savchenko also was rejected, receiving a mere eight votes.

Around three-quarters of the new Verkhovna Rada will be first-time national deputies. The youngest, 23-year-old Svyatoslav Yurash, represents Servant of the People; the oldest, Yuliy Yoffe of Opposition Platform – For Life, is 78 and was first elected to the Soviet-era Ukrainian Parliament back in 1990. The number of women elected has grown from 47 in 2014 to 87l; women now constitute 20.5 percent of the national deputies.

In short, the election has resulted in a rebooting of the Verkhovna Rada, with major changes also awaited in the government and other areas of political life. For many, this is the breakthrough they have been waiting for – one they hope will now kickstart the reform process, facilitating the passage of reform legislation aimed at revamping the legal and law enforcement systems as well as stepping up the fight against corruption

However, skeptics and political opponents fear that the majority secured by Servant of the People will consolidate power in the hands of the president and note that, in the absence of proper checks and balances, this is worrisome. Other observers of the political scene have expressed concern that the Verkhovna Rada is being flooded with inexperienced newcomers, who are vulnerable to political manipulation and being bought off.

Although some irregularities were reported, both external and internal observers have not reported any serious concerns about the election’s fairness, and have welcomed it as another example of democracy advancing in Ukraine. The difficulties facing would-be voters among Ukraine’s huge population of internally displaced persons or those outside of the country have been noted as issues still to be tackled.

Whatever now happens, the political map of Ukraine has been redrawn. Commentators are largely in agreement that the country has entered a new chapter in its history, replete with new opportunities but also immense challenges and imponderables.