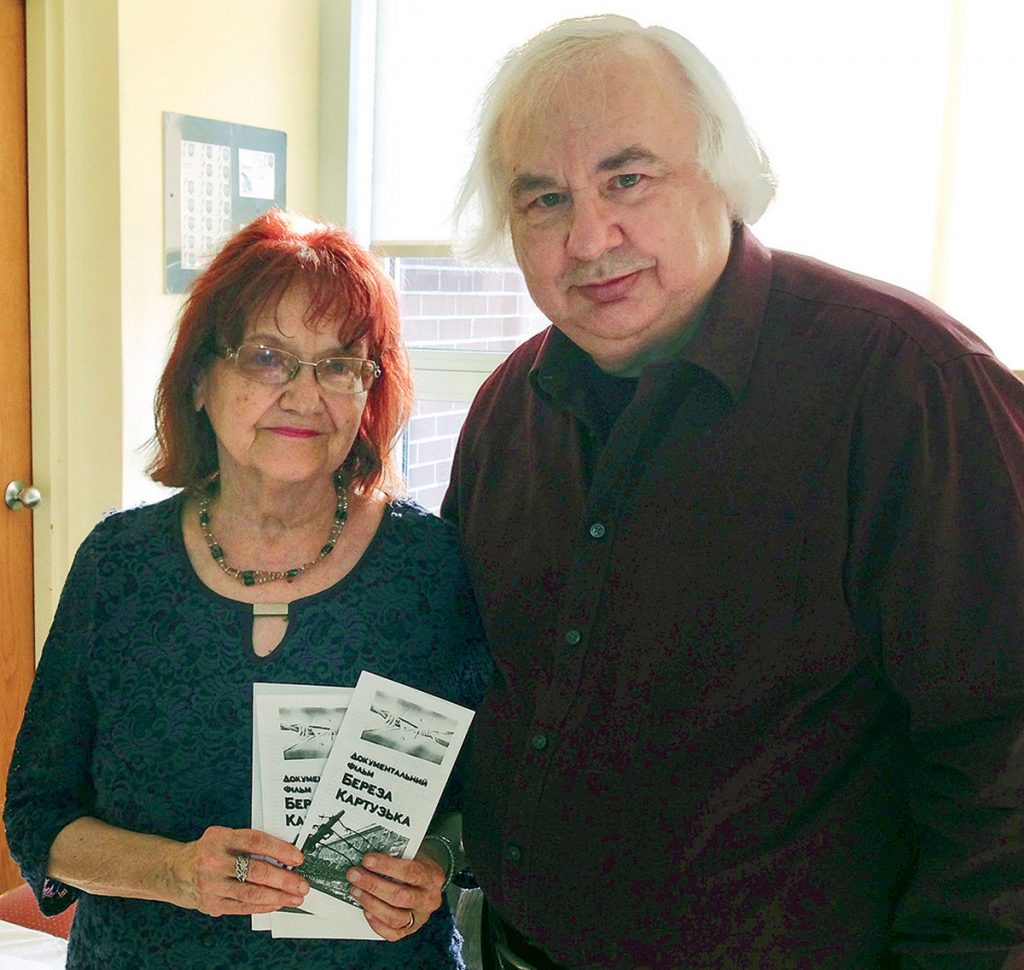 Opening remarks were delivered by the chair of UCC Montreal’s cultural committee, Bohdanna Klecor-Hawryluk. She stated that the film was inspired as a result of stories the director heard as a youth from family friends and his father, who survived Bereza Kartuzka.

She then introduced Yurij Luhovy, the film’s director, who recalled the difficulties encountered in making the documentary, including how the rare footage he filmed at the actual Bereza Kartuzka site was almost confiscated at the Belarus-Ukraine border. He emphasized the importance of documenting historical events.

Based on extensive research, the award-winning documentary examines the political situation in the western Ukrainian territories under Polish occupation between the first and second world wars.

The documentary was narrated by acclaimed Kyiv actor Bohdan Beniuk and the music composed by Roman Luhovy, also of Kyiv.

Concluding remarks were given by Zorianna Hrycenko, producer of “Bereza Kartuzka,” who mentioned that many letters were received during the course of making the documentary from families across North America, providing additional names of survivors and information about the site and what they endured. She thanked Maria Surzycia for assisting with the evening’s screening. She also acknowledged those that helped support the making of the documentary including Caisse populaire Desjardins Ukrainienne de Montréal, the Shevchenko Foundation, BCU Foundation, UNF Montreal branch, Ukrainian Catholic Women’s League and others. Their support was instrumental in ensuring the story was documented, she said.

The evening’s screening, held on July 5, was dedicated to survivors of Bereza Kartuzka who came to Montreal after World War II, among them Ivan Korol, Adolf Hladalowych, Yaroslav Pryszlak, Andrij Dolnyckyj, Yaroslaw Luhovy, as well as survivors throughout North America – most of whom have since passed away.

Ukrainian- and English-language DVDs of “Bereza Kartuzka” are available at www.yluhovy.com.

The next scheduled event of the UCC Montreal Branch is the 28th anniversary banquet of Ukraine’s renewed independence to be held on August 25 with keynote speaker Victor Rud of New Jersey. Mr. Rud, an international attorney, is chair of the Committee on Foreign Affairs of the Ukrainian American Bar Association and author of numerous articles on Ukraine-Russia relations published in Forbes, Kyiv Post, The Atlantic Council and other publications. For tickets and further information, readers may call 438-764-9392.