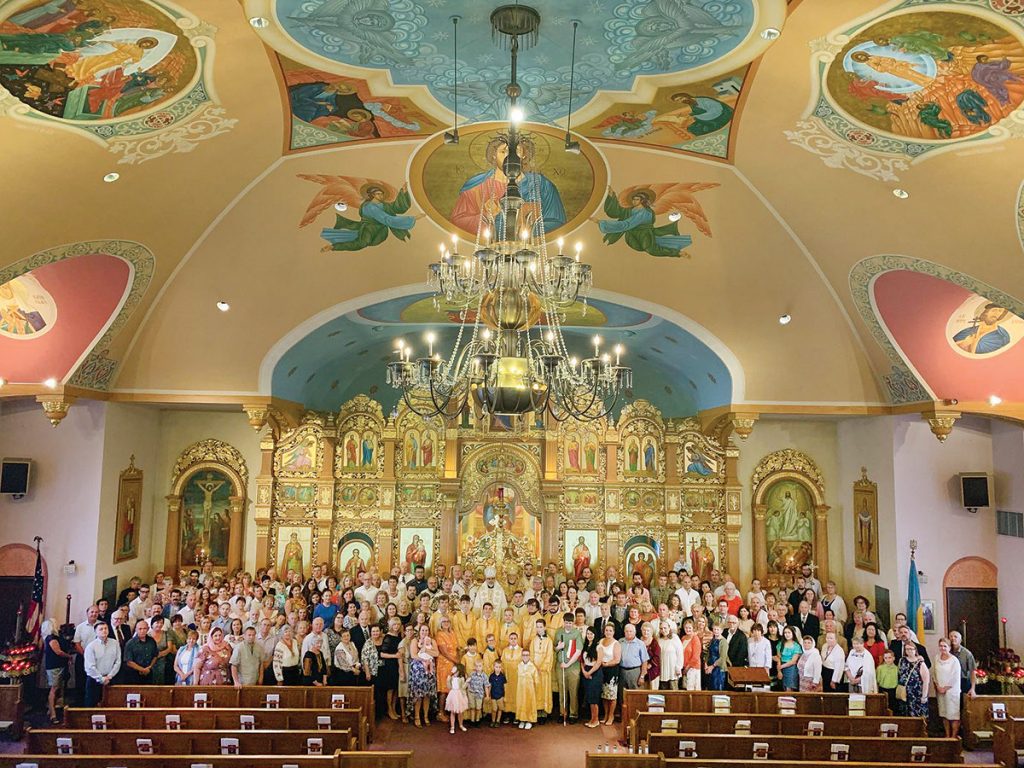 The commemoration began on Saturday evening, July 27, with vespers and a memorial service for deceased clergy, wives of married pastors and faithful who had labored in the Lord’s Vineyard since the formation of the parish.

On Sunday, July 28, hundreds of faithful gathered at the cathedral to welcome Metropolitan Antony, prime hierarch of the Ukrainian Orthodox Church of the U.S.A., and Archbishop Daniel, hierarch of the Western Eparchy and president of the Consistory, who traveled to Parma to lead the celebration of the hierarchal divine liturgy.

Following the liturgy, an anniversary banquet was held in the parish center with 275 people in attendance. Lucy Komichak opened the program and served as mistress of ceremonies. Greetings were offered by Serhij Nahornyj, president of St. Vladimir Board of Trustees.

During the program Mr. Nahornyj presented the annual Brotherhood Scholarship to three high school graduates: John Meaden, Julia Hontaruk and Sophia Schilling. The Brotherhood Parishioner of the Year award for 2018 was presented to Alex Pihuliak, who was honored with a plaque for his love and dedication to the parish.

The entertainment portion of the banquet consisted of Ukrainian folk dances and songs performed by members of the parish ensembles and directed by Oksana Logvynuk. Oleh Sozansky, a renowned bandura player visiting from Ukraine, added to the audience’s enjoyment.

St. Vladimir Parish was organized in the Tremont section of Cleveland in 1924. The original membership consisted of Ukrainians from western Ukraine. Following World War II, hundreds of new members arrived from all regions of Ukraine. Anticipating a migration from the inner city, 10 acres of land were purchased in Parma, an adjoining suburb in 1954. In 1957 the parish purchased the Parma City Hall, which was sold for $11 and was moved the two miles to the current parish property.

The building was converted to a chapel and for 10 years served the parish with an 8:30 a.m. Sunday liturgy. A 10:30 liturgy was served in the church in Cleveland.

In 1967, the parish sold the Cleveland church and constructed the present-day cathedral; the chapel was converted to a school building with classrooms, a library and a memorial room dedicated to the victims of the Holodomor. A 400-seat capacity banquet center and two rectories were also built.

In 1988, a large mosaic of the Baptism of Ukraine was installed over the front entrance of the cathedral. Water from the Dnipro River and earth from Kyiv were combined in the cement of the mosaic, unifying the parish with its ancestral homeland.

In 1993, a large monument to the victims of the Holodomor, one of the first in the United States, was erected on the side of the cathedral, where thousands of cars drive by on a daily basis.

In 2009, at the request of St. Vladimir’s Parish, the city of Parma designated one mile of the busy State Road as “Ukrainian Village” and the side street by the cathedral as St. Vladimir Way.