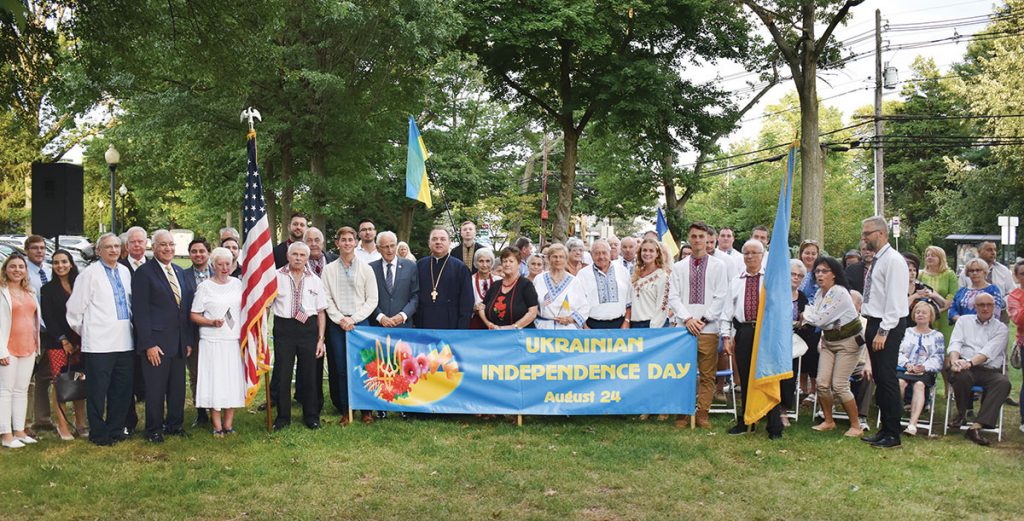 Tom Hawrylko
Participants of the flag-raising ceremony at City Hall in Clifton, N.J.

CLIFTON, N.J. – To mark the 28th year of Ukraine’s independence from Russia, the country’s blue-and-yellow national flag was raised on the lawn at City Hall in Clifton, N.J., on the evening of August 23.

Attended by long established residents of Ukrainian descent, many Fourth-Wavers as well as clergy from St. Nicholas Ukrainian Catholic Church in Passaic and the Ukrainian Orthodox Holy Ascension Cathedral in Clifton, the event also attracts many social and political leaders from Clifton as well as the northern New Jersey region.

Among the speakers was Congressman Bill Pascrell (D-N.J.), who noted that Russia’s war on Ukraine continues. With more than 13,000 killed, 30,000 injured and 1.5 millions displaced, the invasion began in 2014 in the Crimean peninsula and the Donbas region in eastern Ukraine.

“The entire world is again seeing Vladimir Putin’s hostility to democratic order,” said Rep. Pascrell, who often attends events in the Clifton-Passaic Ukrainian community. “Ukraine is our ally and our friend and we must stand beside it. Vladimir Putin is an autocratic bully presiding over a sprawling kakistocracy.”

Rep. Pascrell and other speakers said that Russia’s aggression has been condemned by the international community yet President Donald Trump has spoken of inviting Russia back into the Group of Seven.

The congressman has long been a vocal opponent of Mr. Putin’s violations of peace and stability in Ukraine. After Russian troops first violated Ukraine’s sovereignty in March 2014, Rep. Pascrell called for Russia’s removal as a member of the G-8 and demanded immediate withdrawal of all Russian forces. He has also taken several steps to ensure U.S. support for Ukrainian allies in the face of Russian aggression.

Another speaker, Clifton Councilman Peter Eagler, said the “war mongering by Putin and Russia harks back to the Cold War years. Yet the world stands by and essentially endorses this and allows this violation to happen.”

After the speeches and blessings, as well as the singing of the national anthems of Ukraine and America, Ukrainian singers and musicians performed for the crowd.

The celebration of Ukraine’s independence is always commemorated in Clifton, with over 100 attending, celebrating all things Ukrainian and American. The Ukrainian flag will fly next to the American flag on the grounds of City Hall for 30 days.