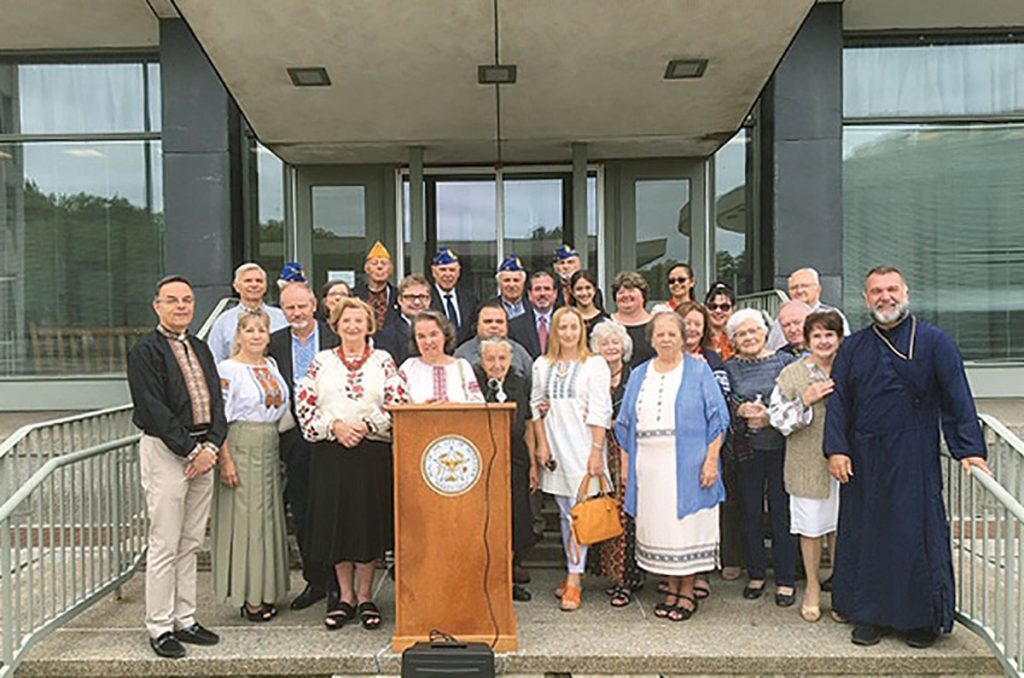 BETHLEHEM, Pa. – Under cloudy skies the Ukrainian flag was raised at Bethlehem’s City Hall on August 26. Sponsored by Branch 91 of the Ukrainian National Women’s League of America, the program commemorating the 28th anniversary of Ukrainian independence was opened by mistress of ceremonies Oksana Kipa.

Father Daniel Troyan of Holy Ghost Ukrainian Catholic Church in Easton, Pa., provided the opening prayer. To the playing of the American and Ukrainian national anthems, the flags of both countries were raised by Viktor Litkewycz and David Kadingo, members of Post 42 of the Ukrainian American Veterans.

The main address was presented by Mathew Koziak, past national commander of the Ukrainian American Veterans and a member of UAV Post 42. He spoke of Ukraine’s years of oppression and its continuing fight for sovereignty and freedom, including the ongoing cyberwarfare being waged against the country by Russia. He highlighted the need to continually support Ukraine in its ongoing reforms and about the importance of protecting established democratic ideals. Mr. Koziak also expressed thanks to the United States for providing support to Ukraine.

On August 23 a flag-raising ceremony was held at Allentown City Hall. Jaroslaw Chorwat led the program and provided the main address. Allentown Mayor Ray O’Connell greeted the participants and proclaimed this day as Ukrainian Independence Day in the city of Allentown. A proclamation was presented from State Rep. Michael Schlossburg.

The Ukrainian flag was raised by Mr. Litkewycz, a member of UAV Post 42. Opening and closing prayers were provided by Father John Seniw, pastor of St. John the Baptist Ukrainian Catholic Church in Northampton, Pa., and by Father Jendras of Allentown.