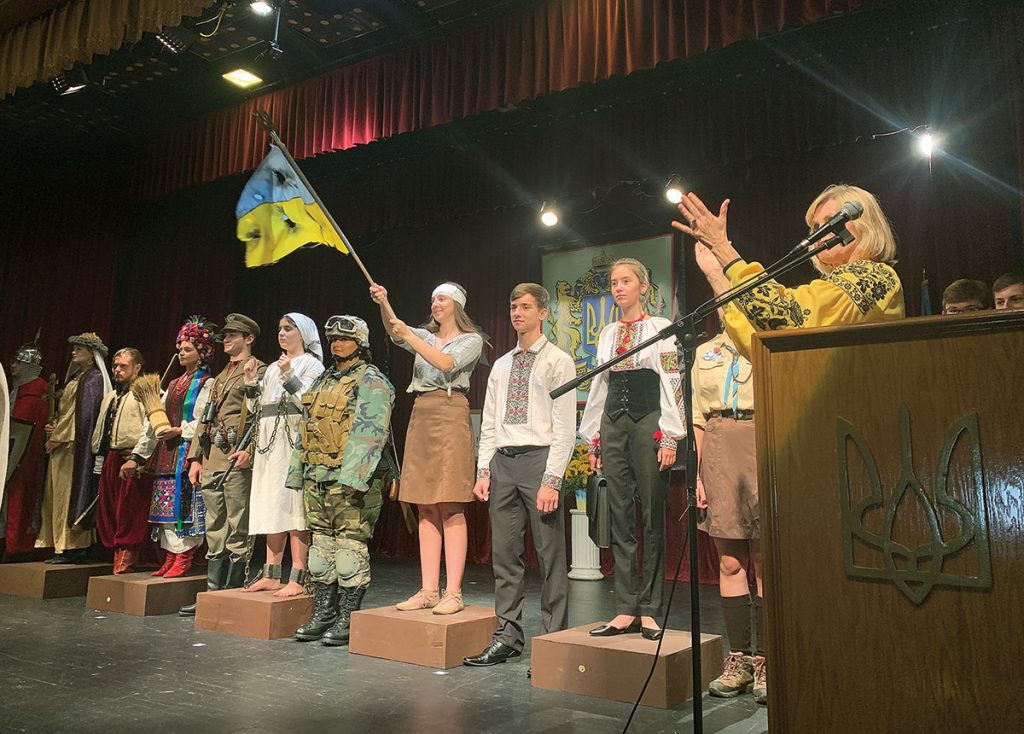 Yaroslav Bilohan
Actors of the play-montage about the history of Ukraine.

JENKINTOWN, Pa. – A concert celebrating the independence of Ukraine was held Saturday, August 24, at the Ukrainian Educational and Cultural Center in Jenkintown, a suburb of Philadelphia. The celebratory concert was organized by the Ukrainian Community Committee of Philadelphia, which is composed of 27 organizations and is empowered to organize united community events.

The concert was opened by the head of the committee, Ulana Baluch Mazurkevich. Flanked by representatives of Ukrainian youth organizations, she greeted the attendees with the traditional “Slava Ukraini” (Glory to Ukraine). After brief remarks, Ms. Mazurkevich called for a moment of silence for the thousands who died in protecting Ukraine’s independence. The attendees then joined in the singing of the American national anthem, led by Yulia Stupen, and the Ukrainian national anthem, led by the bandurists Shabli Kobzariv.

The highlight of the concert was the play-montage about the history of Ukraine, which was directed and produced by Juriy Nakonechny. In a dramatic fashion and in appropriate costumes, the young actors depicted five different periods of Ukrainian history, beginning with the Princely Era and ending with the Revolution of Dignity. Historical commentary was delivered in Ukrainian by Osyp Roshka and in English by Sophia Pitula.

The accomplished choir Accolada, under the baton of Bohdan Henhalo, captivated the audience with its versatile repertoire, from “The Wide Dnipro Roars,” set to words by Taras Shevchenko, to “Ukraine Is, Ukraine Will Be” (music by R. Demchyshyn, words by Z. Ruzhyn).

The Ukrainian community was happy to welcome for the first time to Philadelphia Archbishop Daniel of the Ukrainian Orthodox Church of the U.S.A. In his prayer and remarks the archbishop responded to the query posed by Metropolitan Borys, “Where were you when Ukraine declared its independence?” Archbishop Daniel commented that, at that moment, he did not know what being a Ukrainian in Ukraine meant, having lived all his life in a Soviet Ukraine.

Archbishop Daniel then spoke about the dreams and hopes of Ukrainians in Ukraine, underscoring the suffering that Ukraine faces in the undeclared war with Russia. The archbishop pulled out of his pocket a prayer written by a young handicapped girl living in Ukraine, which was given to him, and read the poignant prayer.

Before the concert ended, Ms. Mazurkevich called Messrs. Nakonechny and Henhalo to the stage and presented them, on behalf of the community committee, with bouquets of sunflowers. The audience responded with prolonged applause in acknowledgement of their wonderful work.

The evening concluded with everyone joining Accolada in singing the prayer “Bozhe Velykyi.”