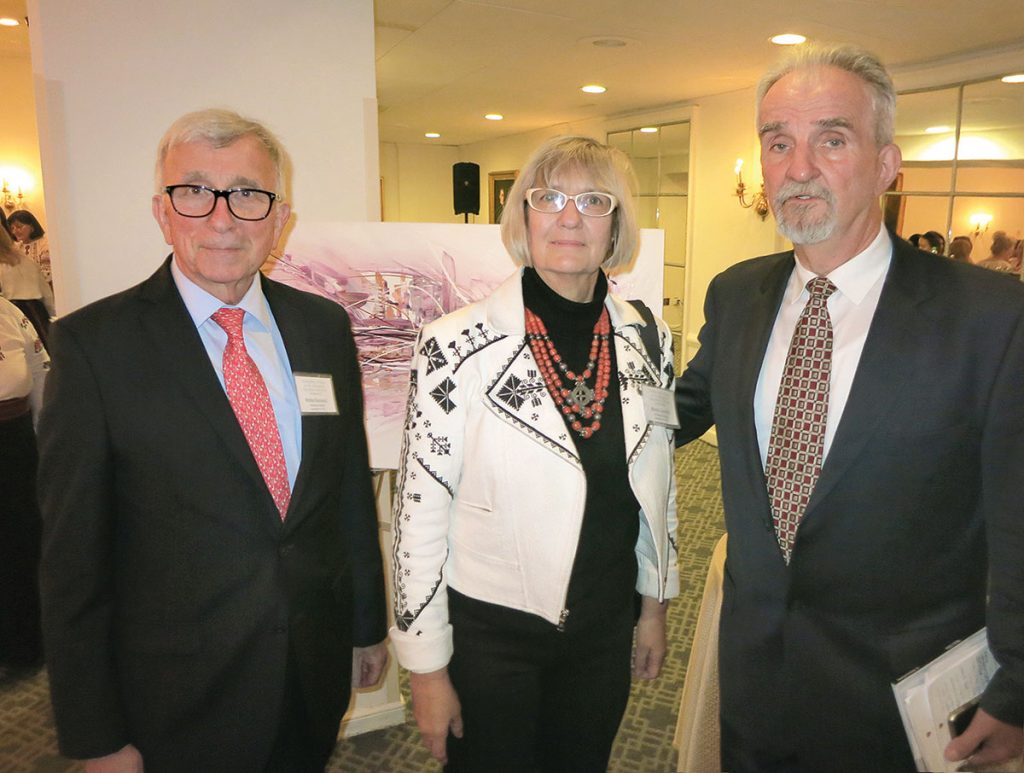 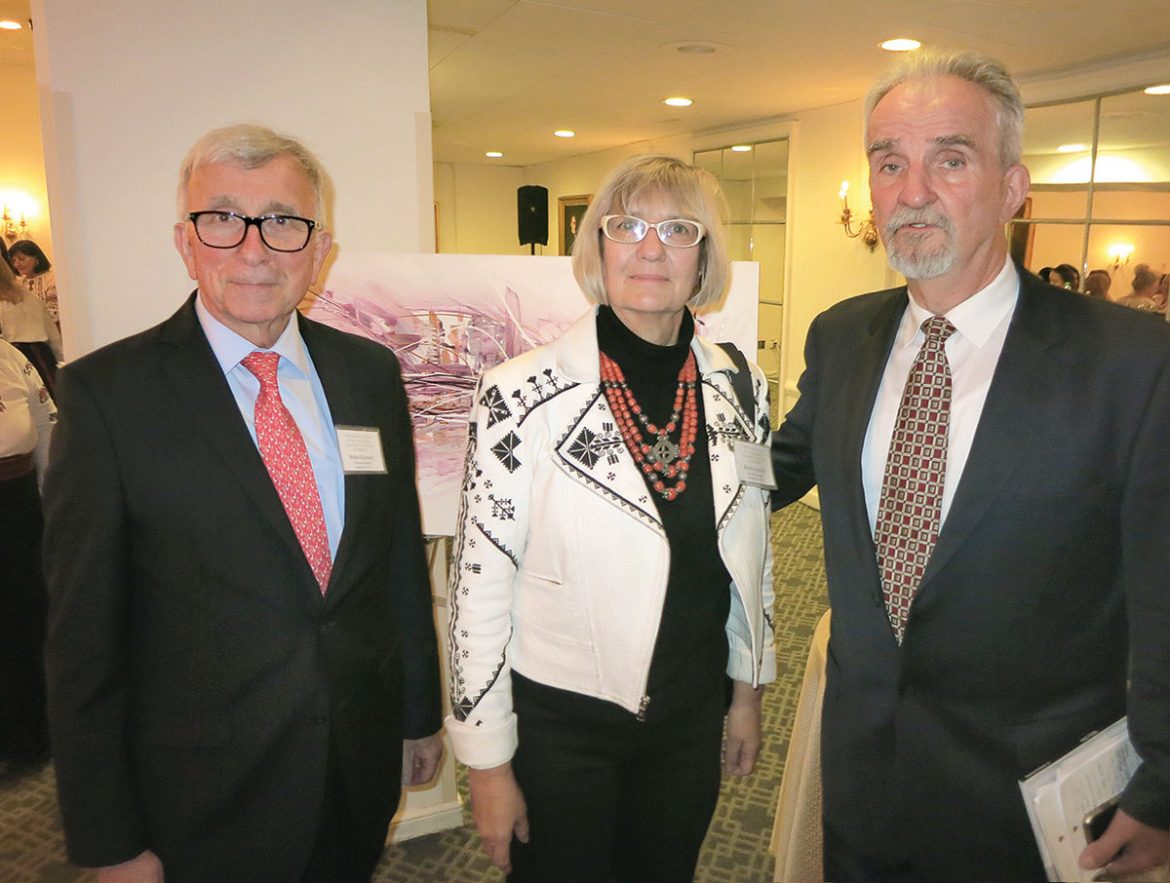 NEW YORK – Ukrainian diaspora organizations in the United States were recognized and celebrated for having flourished for more than 125 years with a conference and banquet at the Princeton Club in New York on September 21.

The event, attended by more than 100 participants, was sponsored by the Center for U.S.-Ukrainian Relations (CUSUR) and the Ukrainian Congress Committee of America (UCCA), as well as the Ukrainian National Association (UNA), which this year celebrates its 125th anniversary of its founding.

Opening remarks were delivered by UNA President/CEO Stefan Kaczaraj and Ambassador of Ukraine to the United Nations Volodymyr Yelchenko.

Mr. Kaczaraj noted the UNA’s historical beginnings and how it paid homage to the new American homeland of Ukrainian immigrants, as the founding date of the UNA was chosen to coincide with George Washington’s birthday, February 22. Struggles were overcome, he said, and the organization continued its work to build a better future for the community and successive waves of immigration. Mr. Kaczaraj underscored: “We did it! Nas ne podolaty!” (We shall not be divided). “And after overcoming the struggles from 125 years ago we are still here, as the diaspora organizations prepare for the challenges of the next 125 years,” he said.

In the first panel discussion, “Found­ation Stones of the Ukrainian American Community,” Roma Lisovich, chief financial officer/treasurer of the UNA, underscored the UNA’s 125th anniversary and provided a brief overview of the organization’s history from its founding in the coal mining town of Shamokin, Pa., and the surrounding towns with growing Ukrainian immigrant populations.

She underscored that the UNA and the community at that time were one and the same.

Ukrainian immigrants to the U.S. underwent an identity affirmation, she noted, from at first identifying as Rusyns, Ruthenians, Austro-Hungarians, Polish and others prior to the World War II, and then identifying as Ukrainians beginning about 1912.

Ms. Lisovich noted the lasting impact of Ukrainian immigration that can be seen in street names and town names, such as in North Dakota, where there are towns called Kief (Kyiv) and Ukraina, among others.

The majority of the early waves of immigration were working men, who were sponsored or promised work in the coalmines or the farming industry. With this influx of male workers came the necessity for women (as the men sought wives). And with the arrival of women came dances, or “zabavas,” held in New York, Philadelphia and Passaic, N.J. that were among the main social events, Ms. Lisovich continued.

Other centers of community life were the church and parishes, and as was the case for the UNA’s survival, the combination of priests and laypersons was seen in the formation of the St. Nicholas brotherhood – a founding fraternal branch of the UNA.

The UNA’s founding was based on the urgings of an editorial of Svoboda in 1893 that spoke about the need for unity and a national community organization that would unite all Ukrainian immigrants that led to the UNA’s establishment in 1894. It remains a source of pride among community activists, uniting all segments of the “hromada” and it is no wonder that the UNA was dubbed with the paternal moniker “Batko Soyuz.”

The UNA, she added, was instrumental in the formation of the Ukrainian Congress Committee of America in 1941 in addressing concerns related to the Communist Red Scare of the time and in promoting the erection of the Taras Shevchenko monument in Washington in 1964.

Time constraints limited Ms. Lisovich’s extensive presentation, and she reminded her audience that there is a wealth of historical information available for free in the online archives on the websites of the UNA’s newspapers, Svoboda and The Ukrainian Weekly (www.svoboda-news.com and www.ukrweekly.com).

During the working luncheon, Prof. Alexander Motyl spoke on the topic “Taking Measure of the Significance of the Ukrainian American Community to Ukraine.”

Dr. Motyl noted the ways that the U.S. diaspora is important to Ukraine and highlighted the community’s lack of significant electoral influence in Washington – although, he said, more policymakers, media and Americans in general have come to know Ukraine better than in previous generations, partly thanks to the aggressive actions against Ukraine led by President Vladimir Putin. Thanks are also due to the work of diaspora organizations, like the UCCA and its Washington information arm, the Ukrainian National Information Service, whose Ukrainian Days advocacy events and similar projects have boosted Ukraine’s visibility by hosting engaging meetings between constituents and representatives on Capitol Hill.

Dr. Motyl underscored that Ukraine matters more in Washington when relations between the U.S. and Russia (or, in the past, the Soviet Union) were at a low point, and Ukraine become less significant when relations between Russia (or the Soviets) and the U.S. are good. Despite these fluctuations, the disapora’s efforts in telling the truth (in the face of Moscow’s denials) and exposing the lies spun by the Kremlin have affected Russia’s international image.

More than 1 million Ukrainians in the U.S. have had and continue to have an impact on more than 40 million Ukrainians in Ukraine, he said. Diaspora organizations have led funding of institutions of higher learning, such as the National University of Kyiv Mohyla Academy and the Ukrainian Catholic University in Lviv, and the diaspora has worked to change internationally held perceptions about Ukraine.

The community’s future work will include incorporating the Fourth Wave of Ukrainian immigrants into diaspora organizations, which has the potential to add to a significant active voting bloc. This wave of immigration, Dr. Motyl said, annually sends more money to Ukraine – nearly $12 billion per year – than the U.S. or other foreign governments.

Prior to the banquet, a cocktail reception was held during which the Ukrainian Chorus Dumka of New York enchanted the audience with a number of selections under the direction of Vasyl Hrechynsky. Some of the songs were performed a capella, while others included piano accompaniment, or incorporated sopilka and wood block. It was noted that the chorus is celebrating its 70th anniversary with a concert on October 6 at The Kaye Playhouse at Hunter College in New York.

The banquet was expertly emceed by Yuriy Symczyk, chief operating officer/national secretary of the UNA, who introduced Metropolitan-Archbishop Borys Gudziak for the invocation, as well as keynote addresses by Ambassador Valeriy Chaly of Ukraine, and Herman Pirchner, president of the American Foreign Policy Council. A benediction was led by Pastor Mykhailo Cherenkov of the Ukrainian Evangelical Community, who led the gathering in reciting the “Lord’s Prayer,” and the evening concluded with the singing of “Mnohaya Lita” (Many Years) and the Ukrainian national anthem.

A detailed report about the conference and banquet will appear in forthcoming issues of The Ukrainian Weekly.