Ukraine’s president rejects state support for Plast scouts: What happened and what’s next 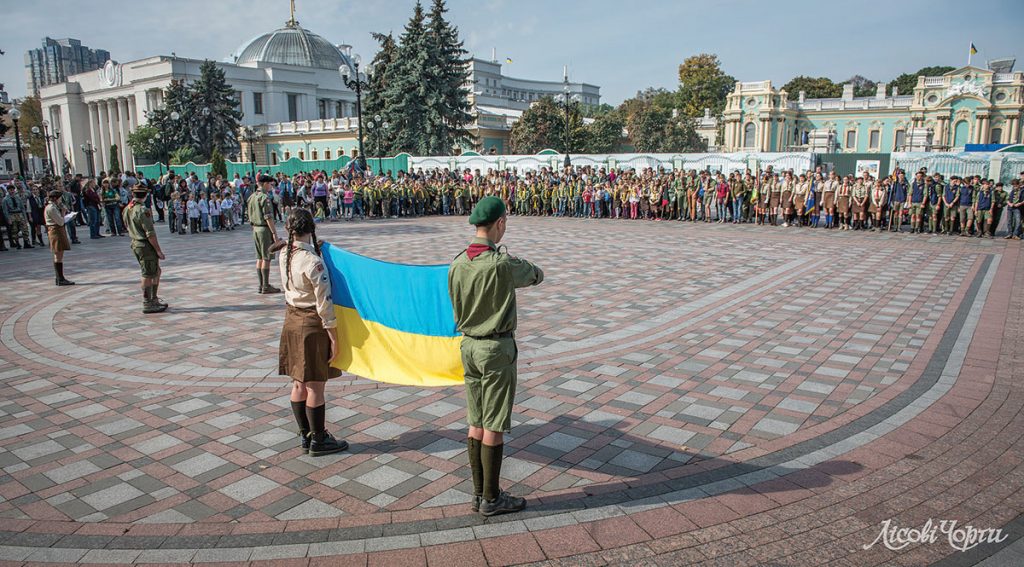 Artem Zhukov
The opening of a new school year of Plast activity in Kyiv was held in 2018 against the backdrop of the Verkhovna Rada and the Mariyinsky Palace.

KYIV – President Volodymyr Zelenskyy rejected the law “On state recognition and support of Plast – National Scouting Organization of Ukraine,” sending it back to the Verkhovna Rada on September 4. The legislation had been approved by the previously elected Parliament at the end of May and awaited the president’s action for more than three months.

The president did not sign the law; instead, he returned it to the Parliament with his proposals. Now it is up to the recently elected new Rada to act on Ukraine’s recognition and support of this scouting organization that was founded in 1911 in Ukraine.

Back on May 30, members of the Verkhovna Rada already knew that in two months’ time snap elections would be held. Just a week earlier, the newly inaugurated president had dismissed the Parliament. It was time to act on legislative projects that were in the queue. Andriy Parubiy, chairman of the Rada, announced that the voting on the law regarding state recognition of Plast – which was written by 62 members of the Verkhovna Rada – would be held that day.

Words of support by the primate of the Orthodox Church of Ukraine, Metropolitan Epifaniy, had raised the pressure on members of Parliament, most of whom publicly backed the new Church and its leader.

Two hundred twenty-eight votes cast in favor were slightly more than what was needed for the law to pass. Seven out of the eight parliamentary factions supported the legislation. Unsurprisingly, the pro-Russian Opposition Bloc abstained from voting.

After the vote, Mr. Parubiy transmitted the law for the next and final step before its enactment: the president’s signature. The law sat on the president’s desk until September 4.

More than a century of activity

The Ukrainian scouting movement known as Plast was formed in 1911 in Lviv. Throughout the more than 100 years of its activity, Plast had endured various historical trials: from world wars, when Plast scouts showed their mettle under extreme circumstances, to a period of underground activity when Plast was outlawed by the Polish state in 1930. During the Soviet occupation, Plast was banned in Ukraine, so all of its methodology and traditions were kept alive by the diaspora in different parts of the world: the United States, Canada, the United Kingdom, Australia, Argentina, etc.

Eventually, Plast renewed its activity in Ukraine in 1989; thus, this year Plast members are celebrating the 30-year jubilee of the restored movement in their homeland. Today Plast has around 12,000 members in 20 countries – 8,500 of them in Ukraine – which makes it the largest Ukrainian youth movement in the world. Last year, Plast volunteers in Ukraine invested more than 668,000 hours in working with children and teens during camps, trips, competitions, mentorship and regular group meetings.

Plast had various forms of cooperation with the state once Ukraine re-established its independence. For example, in the last three years, Plast scouts activities had some financial support directly from the national budget. It was foreseen that the proposed new law on state recognition and support of Plast could form the basis for a more effective form of partnership. Notably, the U.S., Canada, Israel, Singapore, Australia, and other countries already have similar legislation recognizing their national scout organizations.

What’s in the proposed law?

What exactly is included in this legislation?

First of all, there is a statement regarding the state’s recognition of Plast’s “historic contribution to the civic education of children and youths, to the achievement and establishment of Ukraine’s statehood.” More than 500 Plast members have died fighting for Ukraine’s independence. Among them are six Plast scouts who were killed in the ongoing Russian-Ukrainian war. These hundreds of Plast members are honored in the proposed law.

As well, the law expresses support for the continuous activity, over the course of more than a century, of Plast, “which educated tens of thousands of active citizens – educators and scholars, businesspeople, physicians, journalists, church activists, soldiers.”

The legislation recognizes the Plast scouting movement in Ukraine and the world, and its unique role in educating Ukrainian children and youths, and makes it impossible for other organizations to claim Plast’s legacy as their own.

The practical side of the law includes forms of cooperation with governmental institutes and mechanisms of support. The legislation outlines the decision-making process regarding financial support for Plast on both the national and the local levels. It stated aim is to help Ukrainian scouting engage more young people in civic education with patriotic values.

The Ukrainian World Congress (UWC), the Ukrainian Congress Committee of America and the Ukrainian Canadian Congress have publicly supported the law of Ukraine “On state recognition and support of Plast National Scouting Organization of Ukraine.” (See the statements published on page 7 of this issue.) They argue that this legislation is extremely important to the future of Ukraine and timely.

“This law will not only be the foundation for the necessary support and development of the Plast scouting movement in the world and Ukraine particularly, but a basis for the national-patriotic education of children and youth, a powerful unifier for Ukraine and the diaspora, and a significant factor in nurturing and preserving the Ukrainian identity of Ukrainians in Ukraine and throughout the world,” stated UWC President Paul Grod.

In addition, the Ukrainian Greek-Catholic Church and many diaspora organizations have sent letters of support to the Presidential Office.

President Zelenskyy’s proposal regarding the proposed law noted: “Analysis of the law shows that the definition of Plast National Scouting Organization of Ukraine as the only scouting organization in Ukraine… creates benefits and privileges for its functioning and receiving state support, and also creates risks that already existing scouting organizations could not continue performing any activity and new ones could not be created.” The main proposal of the president calls for broadening state support to include more organizations, and not only Plast. Critics say that could lead to the establishment of more youth organizations based on scouting methodology merely for the sake of financial support from the state.

Responding to the strong public interest surrounding this issue, Plast released an official statement on September 6 that emphasized the essential part of the legislation: state recognition of the Plast movement and its contribution to the establishment and development of Ukraine’s statehood. “In terms of the ongoing discussion, we ask the Parliament to accept the proposals for the law and remove the [references to]direct financial support from the state,” Plast officials declared.

Plast scouting in Ukraine has now started a massive crowdfunding campaign to continue its development. (Additional information on Plast programs and financial plans, as well as an option to support the movement, may be found at plast.org.ua/donate.)

In the meantime, the parliamentary Committee on Youth and Sports is preparing an updated version of the legislation and will propose it to the entire Parliament. The next committee meeting on the topic of Plast support could be anytime in the next few weeks or months. Plast officials are participating in discussions aimed at broadening overall state support of civil society.

As losing financial support from the national budget is almost inevitable, Plast in Ukraine plans to develop all of its educational programs by seeking alternative funding from businesses and individual patrons. Leaders of Plast, which is already active in 23 of Ukraine’s oblasts, say the organization plans to continue working toward its goal of giving every child in Ukraine the opportunity to join Ukrainian scouting.