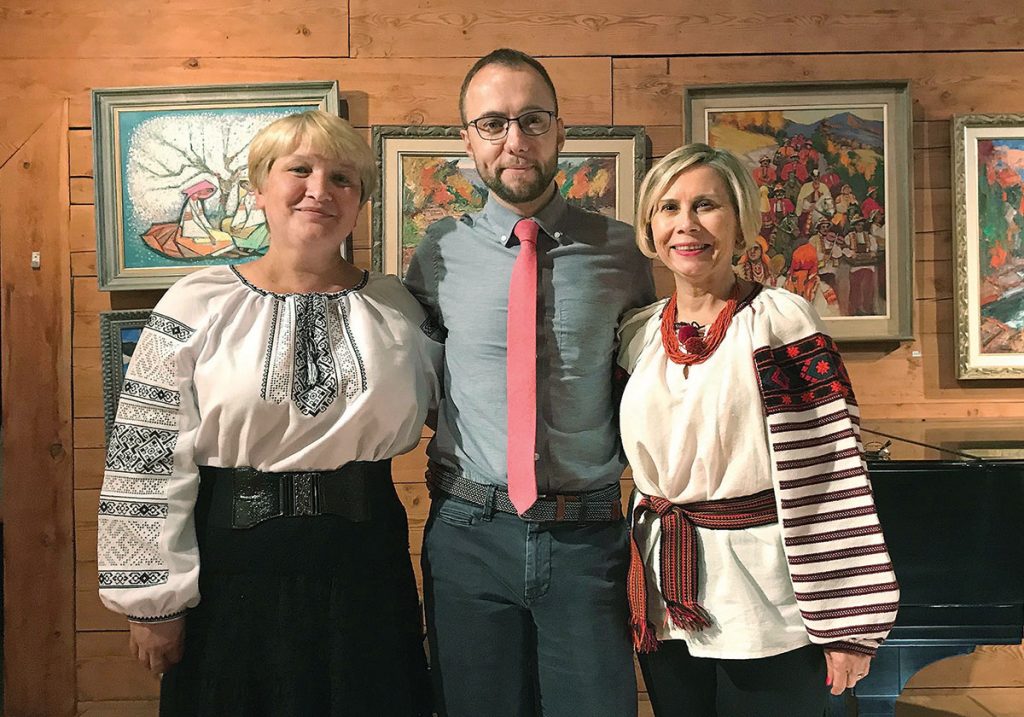 Dr. Irene Sawchyn Doll, as emcee, invited Father Vasyl Kadylo to open the program with a prayer for the people of Ukraine. She then introduced the keynote speaker, Dr. Andrew Nynka, who gave a presentation titled, “Examining Ukrainian Journalists’ Ethical Beliefs Amid Pluralism, Propaganda and War.”

Dr. Nynka had spent a year in Ukraine as a Fulbright Scholar, during which he was a lecturer at the Ukrainian Catholic University in Lviv as well as at the National University of Kyiv-Mohyla Academy in Kyiv. During his time in Ukraine, and in subsequent years, he researched the presentation topic as part of his dissertation thesis. Dr. Nynka received his Ph.D. in 2018 from the Philip Merrill College of Journalism at the University of Maryland.

The presentation at the Grazhda encompassed part of Dr. Nynka’s thesis. He conducted in-depth interviews with Ukrainian reporters from across Ukraine, probing and recording their ethical beliefs and responses to the challenges facing journalists in Ukraine. Dr. Nynka specifically focused on the dialogue that is ongoing in contemporary Ukraine on free speech and objectivity in reportage, particularly under the pressure of reporting on the war in eastern Ukraine and the changing political environment in Ukraine’s government.

“I wanted to [ask]journalists: What is their perspective of their role in a democratic… post-Soviet society where for the past 70 years journalism was a mouthpiece of the government,” said Dr. Nynka.

The speaker told the attentive audience that all 31 of the interviewed journalists knew of, and wanted to adhere to, the BBC standards of ethics, which sets the norm for Western reporting. Two dominant factors affect journalists’ ability to maintain these norms and set the tone for how journalists can operate. One is that the media in Ukraine are predominantly owned, funded and influenced by oligarchs and politicians. Second, these oligarchs’ ownership is primarily driven by a desire for influence in the political and business arenas, rather than for financial profit through advertising and subscriptions, as it is in the United States.

This observation led to the most important outcome of Dr. Nynka’s research, which dealt with the question of objectivity in the press in Ukraine. The interviewed journalists were split on this topic. Half of the journalists believed that journalists must remain completely objective in their reporting. The others felt that the degree of objectivity can be moderated by two mitigating factors: that the Russian-driven press is subjective to the point of streaming false news, and that under war conditions it may be inappropriate to report negative aspects of the Ukrainian military and military efforts. The latter position, which may be considered more patriotic, hazards the danger of permitting the military to function without checks and oversights.

The interviewees indicated to Dr. Nynka that they had the freedom to report on any topic as they felt appropriate, as long as the topics did not reflect negatively on the oligarchs’/owners’ interests.

Dr. Nynka’s presentation was enthusiastically received by the capacity audience, who engaged the speaker in a lively question and answer session.

The artistic portion of the program was provided by Vira Pavlishyn of New York City, who entertained the audience with a moving recitation of the poem “Chervona Kalyna,” written by an unknown author, chosen to commemorate the 100th anniversary of the Ukrainian Revolution. Mrs. Pavlishyn ended with two humorous stories, much to the delight of the audience.

The program concluded with a communal rendition of “Oy, U Luzi Chevona Kalyna,” led by church cantor Stepan Korostil.

Dr. Sawchyn Doll, who organized the event under the auspices of the St. John the Baptist Parish Council, thanked the participants for their support. The attendees expressed their appreciation of the event during the coffee hour prepared by Natalia Korostil.