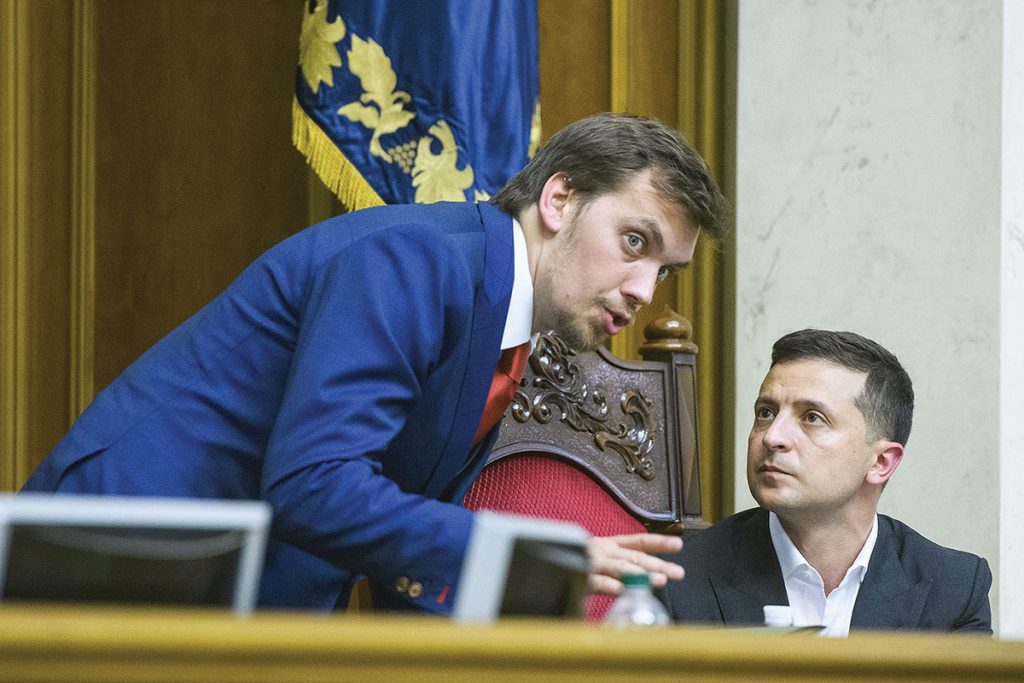 KYIV – It has been a momentous 10 days or so in Ukrainian politics, both within and around the Verkhovna Rada. The new Parliament dominated by President Volodymyr Zelenskyy’s Servant of People party has gotten off to a frenetic start, removing the immunity from prosecution that national deputies had enjoyed and initiating many other changes, some of which will require amendments to the Constitution of Ukraine.

A new government has been created – the youngest in Europe, the prosecutor general has been replaced and a civilian has been named minister of defense. On September 4, the new Cabinet of Ministers also endorsed President Zelenskyy’s earlier request that Volodymyr Klitschko be removed from his post as head of the Kyiv City State Administration. As a result, he will remain as mayor until the next local elections but will lose some of his administrative powers.

The initial signals from the new prime minister, the prosecutor general, the head of the Security Service of Ukraine and the defense minister indicate that far-reaching reforms will be attempted in all the spheres for which they are responsible.

The new-look Verkhovna Rada – of the ninth convocation since independence was achieved in 1991 – convened on August 29. President Zelenskyy was present, and his overriding influence was evident to all. His parliamentary faction with its 254 seats (out of 423 filled) had no problems getting its nominees for the speaker of the chamber and first deputy elected.

As anticipated, these were Dmytro Razumkov, 35, the former “political technician” turned politician and No. 1 on the Servant of the People party list during the July 21 parliamentary elections. The new speaker promptly switched from speaking Russian to conducting business in Ukrainian. He declared that the chief aims would include accelerating economic growth and intensifying the fight against corruption. “Our goal is to get the economy growing by 5 percent to 7 percent next year,” he declared.

Backing him up is Ruslan Stefanchuk, 43, a professor of law, regarded as the main ideologist of Servant of the People, who also serves as the president’s official representative in the Rada.

The second deputy speaker was something of a surprise: a relatively unknown deputy from Yulia Tymoshenko’s Batkivshchyna Party, Olena Kondratiuk. Her selection confirmed that Ms. Tymoshenko’s faction, with its 25 seats, is for now the closest to Servant of the People from among the other four political forces that made it into the new Parliament by overcoming the 5 percent threshold.

The other three political forces are the pro-Russian Opposition Bloc – For Life, which has 44 seats, former President Petro Poroshenko’s European Solidarity, with 27, and rock singer Svyatoslav Vakarchuk’s Voice party, with 17.

Another potentially important group, especially when 300 votes are needed to effect constitutional changes, are the independent deputies elected in majoritarian system constituencies. Twenty-three of them have united in a parliamentary group calling itself For the Future that is co-chaired by Taras Batenko and Viktor Bondar.

During the initial session of the new Verkhovna Rada, which was extended into the following morning by the new speaker, it was clear that the Servant of the People party felt extremely confident and was determined to push ahead very forcefully. Their representatives were clearly determined to make the fullest use of the opportunities offered by the unprecedented situation for independent Ukraine where one party and its parliamentary faction predominates.

Messrs. Razumkov and Stefanchuk steered the proceedings calmly, though occasionally, as newcomers, they slipped up on procedural matters. But it was clear that Mr. Zelenskyy, who sat in his presidential seat a few meters away, was in fact calling the shots. His chief of the Office of the President, the controversial Andrii Bohdan, was also present and made no effort to mask his ebullience.

During its initial session, the Rada’s deputies proceeded to approve a new prime minister and Cabinet of Ministers, and replace the prosecutor general. Oleksiy Honcharuk, 35, a lawyer with right-liberal leanings, was appointed prime minister. He heads a revamped government, as the number of ministers has been reduced from 25 to 17 and some of the ministries have been transformed.

Among the more controversial changes, the ministries of Culture, Information Policy, and Youth and Sports have been merged into one general Humanitarian Policy Ministry headed by Volodymyr Borodiansky, a media specialist. Likewise, the Ministry of Veterans Affairs was merged with the Ministry for Temporarily Occupied Territories and Internally Displaced Persons. The Ministry of Agrarian Policy was liquidated and part of its functions transferred to the Ministry of Economic Development.

Another surprise, and a sign of the changing times, was the creation of a Ministry of Digital Transformation. It is headed by 28-year Mykhailo Fedorov, an IT entrepreneur, who is also the youngest member of the Cabinet of Ministers.

“Our goal,” Mr. Honcharuk announced, is “to increase economic growth to 5 to 7 percent next year,” and to let people feel the results in their everyday life. Among other primary tasks, the new prime minister has mentioned removing the moratorium on land privatization, tax reform, and stripping the Security Service of Ukraine (SBU) of its power to investigate financial crimes.

The new Parliament also approved the president’s choices for the posts of minister of foreign affairs, defense and internal affairs, and General Prosecutor, something which the previous Parliament with its very different political composition had stymied. Diplomat Vadym Prystaiko has become the new foreign affairs minister, and another leading diplomat, Dmytro Kuleba, the vice prime minister for European and Euro-Atlantic integration.

Andriy Zagorodniuk, who headed a reform project within the Ministry of Defense, is now at its helm. Mr. Zelenskyy’s choice for managing and reforming the SBU, Ivan Bakanov, was elevated from first deputy chief to head of the SBU.

Keeping the problematic Arsen Avakov on as minister of internal affairs, however, drew criticism from many quarters. Others were quick to point out that the support of this strong political maverick with ties to oligarch Ihor Kolomoisky during the presidential and parliamentary elections prevented possible manipulation of the vote, and that his experience and influence is an important safeguard for Mr. Zelenskyy, a relative political newcomer. The new minister of infrastructure, Vladyslav Kryklii, was formerly Mr. Avakov’s adviser.

Like the Parliament, the government is mainly composed of new faces. It includes six women. The Ukrainian American acting Minister of Health Ulana Suprun who had spearheaded reforms in the medical sector has been replaced by Zoriana Skaletska, a leading NGO activist in this sphere and a law professor. Oksana Koliada, a reserve colonel, became the minister of veterans and temporarily occupied territories; Aliona Babak, formerly with the Samopomich party, the minister of community development; Yuliia Sokolovska, who headed a USAID health project, the minister of social policy; and Hanna Novosad, a political scientist and policy advisor, the minister of education and science. Oksana Makarova was retained as minister of finance.

The key position of prosecutor general was filled by Ruslan Riaboshapka, a former deputy minister of justice who later resigned from the National Agency for Corruption Prevention (NABU) and has been working for Mr. Zelenskyy on judicial reform. Among his first actions was to fire the Chief Military Prosecutor Anatoliy Matios, whom former Justice Minister Yuriy Lutsenko had reportedly entrusted just before his departure with overseeing the work of the Department of the Special Investigations within the Prosecutor General’s Office.

The Verkhovna Rada approved an agenda based on the numerous priority bills that the president had proposed. It also managed to do what previous Parliaments had failed to deliver despite the apparent general agreement among the country’s political forces that the measure was important in the fight against corruption and for the sake of political credibility: to lift the immunity of national deputies from prosecution in matters concerning criminal offenses.

This historic change had to be carried out in two stages. On the opening day of the Rada’s work, the bill to remove immunity was adopted in its first reading with 463 votes. To become law, it needed to be passed again in its second reading by a constitutional majority at the next parliamentary session, which was scheduled for September 3.

On September 2, President Zelenskyy met with the new Cabinet of Ministers and provided it with a workplan, complete with strict deadlines. Among other things, he insisted that the government should expeditiously adopt the 2020 budget, lower credit rates, list state-owned companies up for privatization, lift the land privatization moratorium and begin the process of legalizing casinos and regulating amber mining.

The second session of the Verkhovna Rada on the following day saw another long and productive session. The crowning point was the lifting of the immunity of parliamentary deputies in criminal matters, particularly corruption, while not undermining the protection of their independence as regards political views and actions. The measure was approved by 373 votes, with only the Opposition Bloc – For Life opposing it.

The Verkhovna Rada also agreed to submit various other proposed amendments to the Constitution to the Constitutional Court for its vetting. These include drastically reducing the number of parliamentary constituencies, from 450 to 300. Mr. Stefanchuk subsequently announced that a bill defining the grounds for impeaching the president will also be submitted shortly. Both the issue of parliamentary immunity and a law on impeachment were election promises in Mr. Zelenskyy’s election campaigns.

President Zelenskyy’s political force has taken control of the executive and legislature, and says it is poised to revamp the legal sphere and law enforcement and security institutions. The decisive manner in which the drive to achieve results is being expressed has nevertheless raised questions, just as it has fueled hopes.

Some see it as a dangerous re-shaping of the Ukrainian political system, concentrating power in the hands of the president and his closest colleagues. Others, as the modernization, streamlining and opening up of a cumbersome, obsolete and self-serving system that lost touch with the population it was supposed to represent and therefore was rejected at the ballot box.