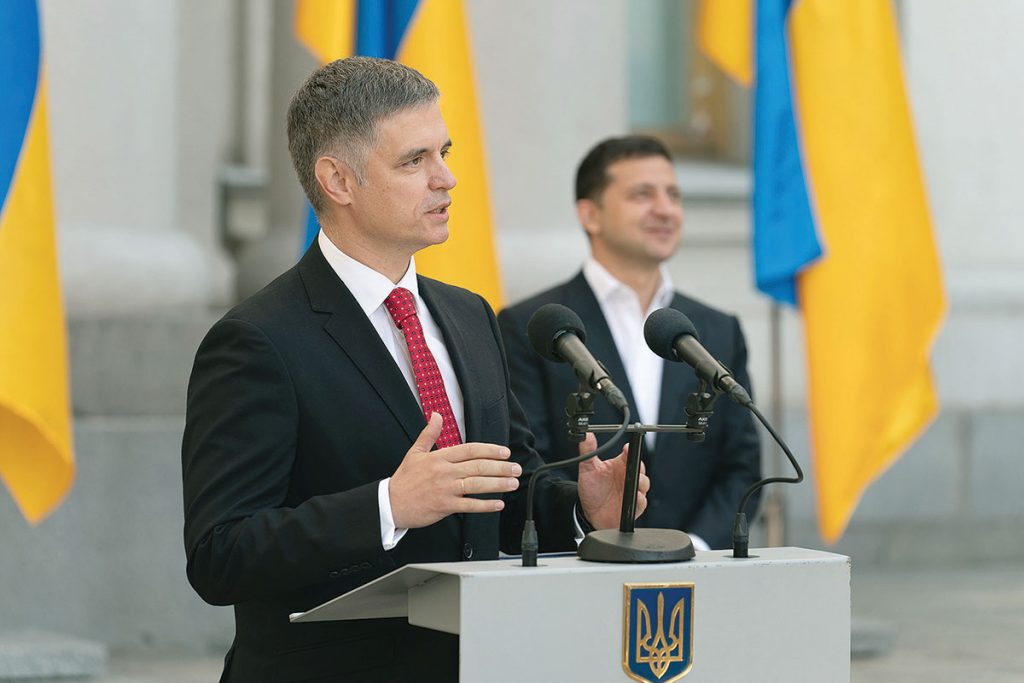 Presidential Office of Ukraine
Ukraine’s Foreign Affairs Minister Vadym Prystaiko on September 11, when he was introduced by President Volodymyr Zelenskyy to the diplomats and staff of his ministry.

KYIV – A flurry of diplomatic activity continues around events surrounding the forthcoming summit of the “Normandy Four” leaders (Russia, Germany, France and Ukraine), and the separate, and now confirmed, meeting of the Ukrainian and U.S. presidents.

Ukraine’s new minister of foreign affairs, Vadym Prystaiko, indicated on September 18 that a meeting of the Normandy Four – which Ukraine had wanted to be held in September – will now probably be held in October. That same day, the White House announced that President Volodymyr Zelenskyy will meet with President Donald Trump next week in New York during the opening of the 74th session of the United Nations General Assembly.

Both events have generated considerable speculation and controversy. While potentially providing new opportunities, they pose a major test for President Zelenskyy and the cohesion and efficacy of his nascent foreign policy, as well as the aptitude of his team in this sphere.

Russia’s insistence on strict terms for its participation in a new Normandy Four summit – namely Ukraine’s acceptance of the controversial “Steinmeier formula” from 2016 as a precondition – has set off alarm bells. The formula has been keenly supported by Russia, and backed by Germany and France too. But Ukraine has been wary of this scheme and until this week managed to keep it off the agenda.

The Steinmeier formula foresees the simultaneous implementation of both the security and political components of the earlier Minsk accords from 2014 and 2015 aimed at ending the Russian-Ukrainian war in the Donbas, but the interpretation of the modalities of their implementation have remained a stumbling block. The issues concern, among others, at what stage does Ukraine regain control of the border, when are troops and armed formations withdrawn, how are local elections to be conducted, and what type of local self-government is foreseen.

The announcement about President Zelenskyy’s forthcoming meeting with President Trump also raises questions and alludes to residual difficulties behind the scene. Attempts were initially made in some quarters in Washington to depict the new Ukrainian president as being in league with “enemies” of Mr. Trump. Although this unexpected storm appears to have blown over, it is striking that the announcement refers only to a meeting of the two presidents on the margins of the U.N. General Assembly. There is no mention of an official visit by Mr. Zelenskyy to the White House as had initially been envisaged.

The question of how the Ukrainian president and Russian President Vladimir Putin will react to one another at their first meeting applies similarly to that with Mr. Trump. What will be on the agenda coming so soon after Mr. Trump made it clear that he wants Mr. Putin to be allowed to rejoin the Group of Seven and the U.S. leader’s seeming reluctance to provide military assistance to Ukraine.

Mr. Zelenskyy was well received on his first foreign visits to Paris and Berlin, Kyiv’s partners in the Normandy negotiations format. He held firm to the principles defended by his predecessor of no concessions on independence and territorial integrity, but he signaled his readiness to begin dialogue with Moscow. The political newcomer took the initiative and established direct telephone contact with his Russian counterpart.

The result was an agreement on the bilateral exchange of 35 captives that was seen as a potential breakthrough which could help move things forward – not only in terms of securing the release of more Ukrainian political prisoners held by Russia, but also in reviving the moribund peacemaking process centered on the Minsk accords.

Observers note that much of this was successful improvisation without a proper foreign policy team to guide the new president. Foreign Affairs Minister Prystaiko was not approved by the Verkhovna Rada until relatively recently and in the meantime Mr. Zelenskyy had also announced the replacement of Ukraine’s ambassador in Washington.

Mr. Zelenskyy suggested, with France’s President Emmanuel Macron backing the idea, but also for his own particular reasons, that in the wake of the prisoner swap a summit of the Normandy Four leaders could be arranged without delay. The last one was held three years ago. It was hoped that such a meeting could be held in Paris on September 16, which would have coincided roughly with the fifth anniversary of the signing of the first Minsk accords in 2014.

But on September 13 Putin senior advisor Yurii Ushakov suddenly publicly announced that Moscow was insisting on prerequisites. The main one was not only that the “Steinmeier formula” be agreed upon as the roadmap, but that the parties should agree to it in writing in advance of the meeting. Later that day, without going into details, Mr. Prystaiko announced that the summit was postponed for technical reasons from the Russian side.

On the following day, former Ukrainian President Leonid Kuchma, who is Mr. Zelenskyy’s envoy for the ongoing peace talks in Minsk, expressed his concern. He told the Associated Press that Ukraine is being pressured by France and Germany to agree to “all the demands that Moscow is making,” effectively empowering the “separatists” it has installed there through what would be phoney local elections under Russian control. “I don’t have a lot of hope,” he added. “Zelenskyy will have a hard time – it will be one against three people,”

Mr. Kuchma reiterated the Ukrainian position: “Security comes first. You need to pull out the troops, pull out the heavy weaponry, give us back the border, and then we will hold free elections.” Subsequently, Mr. Prystaiko and other Ukrainian officials have clarified that any elections in the occupied areas can be conducted only once Russian forces are withdrawn, under Ukrainian law and supervision of the Organization for Security and Cooperation in Europe, and that any temporary local self-governance is limited and temporary. The question of how representative an election in the Donbas could be in the absence of 1.5 million internally displaced persons remains open.

After more frenetic behind-the-scenes diplomacy, Mr. Prystaiko announced on September 18 that Ukraine had agreed to use the Steinmeier formula as the basis for further discussion at the forthcoming summit, making it clear that without this Russia would not have gone ahead. He stressed that, although some compromises will eventually have to be made to achieve peace, the Ukrainian side will not give way on fundamental issues.

Some observers have expressed concern about this “backtracking.” Vladimir Socor of the Jamestown Foundation concludes: “These vacillations reflect the dysfunctional nature of the Zelenskyy team’s Russia policy.” While Mr. Prystaiko is an experienced diplomat, he is subordinate to “a novice president” and inexperienced “close circle” who have “positioned their boss as the anti-war, pro-peace candidate.” The analyst points out that “Zelenskyy’s team” – he mentions Andriy Yermak, a film copyright lawyer and film producer, as handling contacts with Moscow – “has shown an inclination for non-transparent contacts with the Kremlin.”

Former Minister of Foreign Affairs Pavlo Klimkin commented that the “Steinmeier formula is not something threatening” if seen as “only one component of the overall process,” and applied strictly in accordance with OSCE standards and Ukrainian law. But the risks are nevertheless significant that Russia will try to force though its own interpretation that is inimical to Ukraine’s interests. What is needed at this time, Mr. Klimkin advises, is not to present the discussion in terms of “victory” or “betrayal,” but to rely on sound professional and political explanations.

Mr. Prystaiko has been at pains to stress that capitulation is not involved. On September 18 he told a parliamentary committee: “No one is going to surrender Ukraine, and every person who is negotiating is not necessarily a traitor.” Nevertheless, on September 19 former President Petro Poroshenko’s TV Channel 5 reported that around 100 protesters were demonstrating outside the Presidential Office with slogans such as “No Capitulation” and the “Normandy Conspiracy is State Treason.”

Mr. Prystaiko has also indicated that the Ukrainian president will propose his own “Zelenskyy formula,” which entails a plan of gradual practical steps that “correspond to the expectations of the people of Ukraine.” If the Normandy Four summit, which is still expected to be held in Paris, fails, the president will seek to introduce “new dynamics,” namely expanding the format to include the United States and Britain. Therefore, Mr. Zelenskyy’s meeting with Mr. Trump will be important in this regard also.