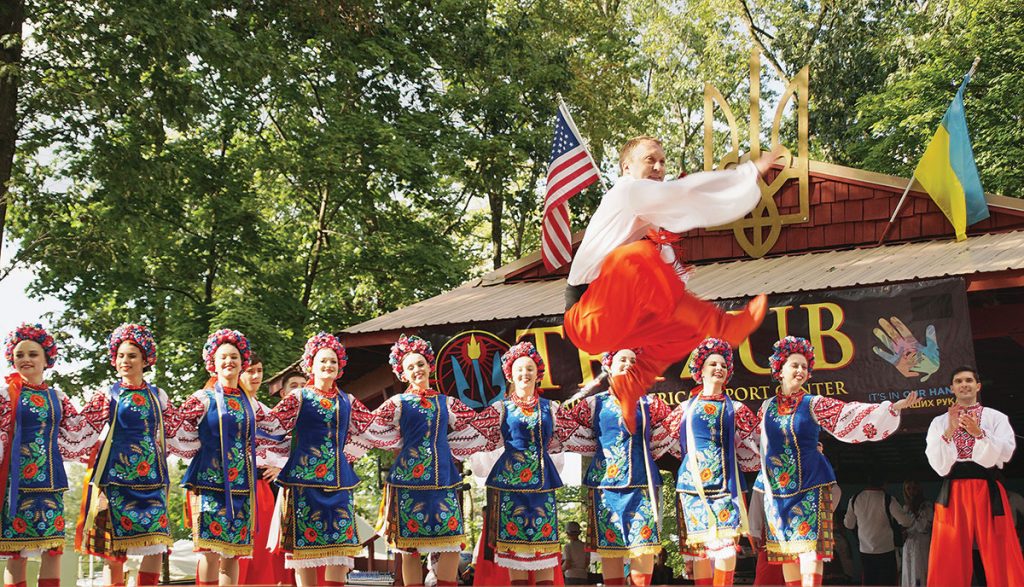 HORSHAM, Pa. – A perfect summer day welcomed nearly 3,000 people at the 28th annual Ukrainian Independence Day Folk Festival, on Sunday, August 25, at the Ukrainian American Sport Center Tryzubivka. The shady festival glade was adorned with the flags of the United States and Ukraine, and with the vibrant and colorful Ukrainian embroideries, folk arts and crafts, jewelry, emblems, motifs and wares displayed by the vendors.

Ukrainians, hailing directly or through ancestry from nearly all regions of Ukraine, demonstrated solidarity with their homeland and with all fellow Ukrainians: Beautiful embroidered shirts and blouses, flags, tryzubs (Ukrainian tridents), Ukrainian sports and thematic affirmed the presence of Ukraine’s immutable spirit well before the concert had even started.

Many non-Ukrainians attended and came to know and to experience the culture and history of a people that continues a seemingly endless fight for freedom and human rights.

The Banner of Jasna Gora historical re-enactment group provided living, walking, talking displays of the clothing, armor, armaments and daily wares from Ukraine’s Kozak era. Their presence and presentation of arms on stage during the festival concert’s opening ceremonies was a reminder of the legendary struggle of Ukraine’s Kozaks for freedom and independence. This year, Kobzar Alex Lahoda added his talents to the lore, demonstrating the magic of the bandura, the instrument known as the voice of Ukraine.

Representatives of the area’s ethnic communities – Vietnamese (led by Teresa Tran and Vicky Ung), Korean (led by Grand Master Bong Pil Yang) and Indian (led by Manish Ingle) – some dressed in their national garb, also participated in the opening ceremonies.

The Korean American delegation, emissaries duly authorized by the Ministry of Patriot and Veterans Affairs of the Republic of Korea, awarded their homeland’s Ambassador of Peace Medal to five Ukrainian American veterans of the Korean War and ensuing demilitarized zone (DMZ) conflict: Victor Litkewycz, Roman Wasylyshyn, Michael Hryshchyshyn, James Jubinski and Christopher Labiak (accepted by his mother, Joanne Labiak). The medals were accompanied by official certificates expressing the thanks of the Korean people for their distinguished service.

As is the tradition at Tryzub, the festival’s artists, spearheaded by the Voloshky and Iskra Ukrainian dance ensembles’ artistic directors, Taras Lewyckyj and Andrij Cybyk, presented a collaborative concert program that underscored the theme “A Celebration of Liberty and Unity”.

Repeatedly, the Voloshky and Iskra dancers, having rehearsed and learned each other’s choreographies, took the stage and danced together, as one ensemble.

Iskra and Voloshky also wowed the crowd with an interesting “mash-up” dance. Mr. Cybyk’s discovery of the fact that the music for “Holubka,” a dance from Kolomyia, Ukraine, and the American Southern country dance song “Cotton-Eyed Joe” have nearly identical transitions and share the same key, tempo and musical structure, inspired him to fuse the two mountain cultural expressions and to re-characterize the dance. The dancers performed the classic Ukrainian number dressed in Southern garb to the tune of “Cotton-Eyed Joe.” Mr. Cybyk commented, “[Holubka] has always been one of my favorite dances as it has a loose, [mountain]quality to it, yet it is all so very structured, geometric and beautiful; my interpretation is meant to show respect for a brilliant choreography and celebrate how a completely different musical culture can capture the same spirit.”

The featured performers for this year’s festival, the Korinya Ukrainian Folk Band, gave a spirited performance of traditional Ukrainian folk songs and melodies, all masterfully and uniquely arranged by them.

Also premiering on Tryzub’s stage was a special martial arts demonstration, performed by Grand Master Bong Pil Yang’s School. This reminded the audience that many Ukrainian dances, especially the “Hopak,” are based on the martial and other fighting arts of Ukraine’s Kozak warriors.

At the concert program’s finale, the Voloshky and Iskra dancers broke out into a “Hopak”.

As the encore music of “Hopak” continued to play, Ms. Tarasiuk called all of the performers to the stage for a final good-bye. Jurik Matolak, leader of the Vox Ethnika orchestra, led a rousing chorus of “Mnohaya Lita.” He played the accordion as he sang and was accompanied by Ms. Dekajlo’s violin. Shouts of “Glory to Ukraine – Glory to its Heroes” closed the concert.

A bountiful Ukrainian kitchen and BBQ grill served tasty meals and desserts throughout the day, and an assortment of tap beers, wines, spirits and other refreshments were also available. Face painting, caricature drawings, balloon art and other amusements were available for kids of all ages.

Following the festival program, there was a dance at the outdoor pavilion to the tunes of the Vox Ethnika orchestra.