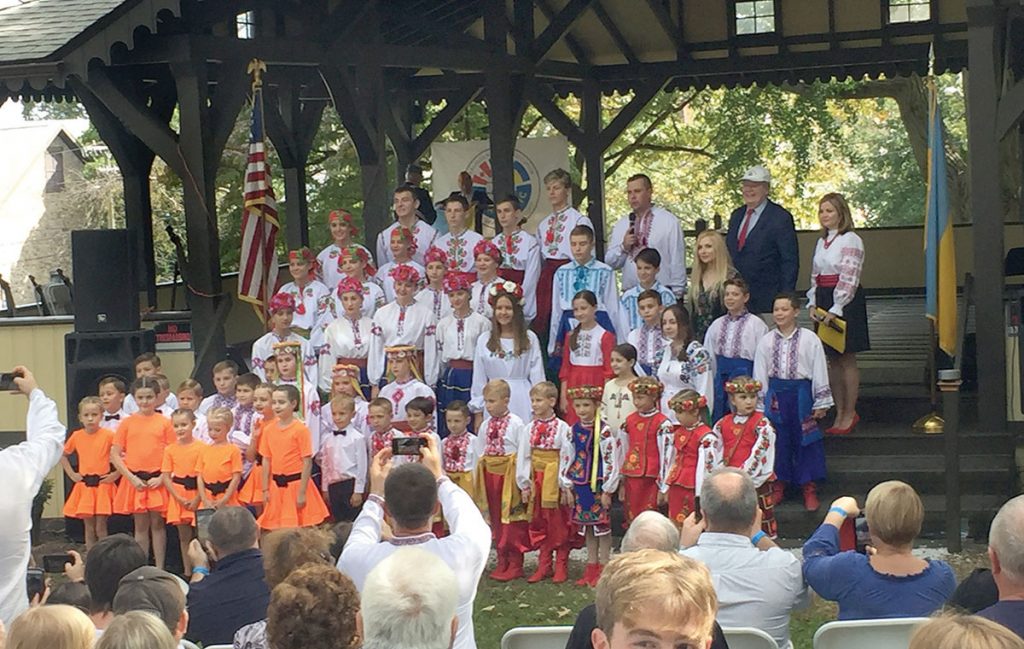 STAMFORD, Conn. – The 52nd annual Connecticut State Ukrainian Day Festival was held on September 8 on the grounds of St. Basil’s Seminary in Stamford on a beautiful and sunny day.

The Ukrainian Museum opened its doors at 1 p.m. Inside, there were two viewings of the documentary “The Ukrainian American Legacy.”  Award-winning filmmaker Roman Brygider was present to make a brief introduction of his film.  Visitors also had the opportunity to view the historical exhibition titled “For Unification, For Statehood” honoring the centennial of Ukraine’s struggle for independence (1917-1921).

The afternoon program began at 2:30 p.m. with a flag ceremony presented by the Ukrainian American Veterans, followed by the singing of the American and Ukrainian anthems.  Opening statements were made by Bishop Basil, the Very Rev. Bohdan and Stamford Mayor David Martin, who welcomed visitors to his city.  A lively and colorful concert  followed with performances by renowned singer Iryna Lonchyna, violinist Valeriy Zhmud, singer Victor Sydir, Ukrainian dance groups Kalynonka from Stamford and Vesna of Rockland County, N.Y., as well as Viktoria Tychnska and Salomia Lobach, vocalists, the Oleksandra Stelmah Dance Group of Stamford, Olha Obertos and Ensemble of Brooklyn, N.Y.  The program was emceed by Roman and Olena Stanislavskyy.

St. Basil’s Seminarians welcomed festival guests to their table that included an attractive backdrop for photo opportunities.  They also accepted special intentions, which were remembered in a special day of prayers.

During the afternoon, children enjoyed jumping in a “moon walk,” making crafts and having their faces painted.

The day ended with a dance to the music of Halychany in the outdoor pavilion under the stars.

The festival chairman was Mr. Stanislav­skyy, assisted by the wonderful committee from the sponsoring 10 Ukrainian Catholic parishes of Connecticut.  Event sponsors were Meest and the Ukrainian National Association.