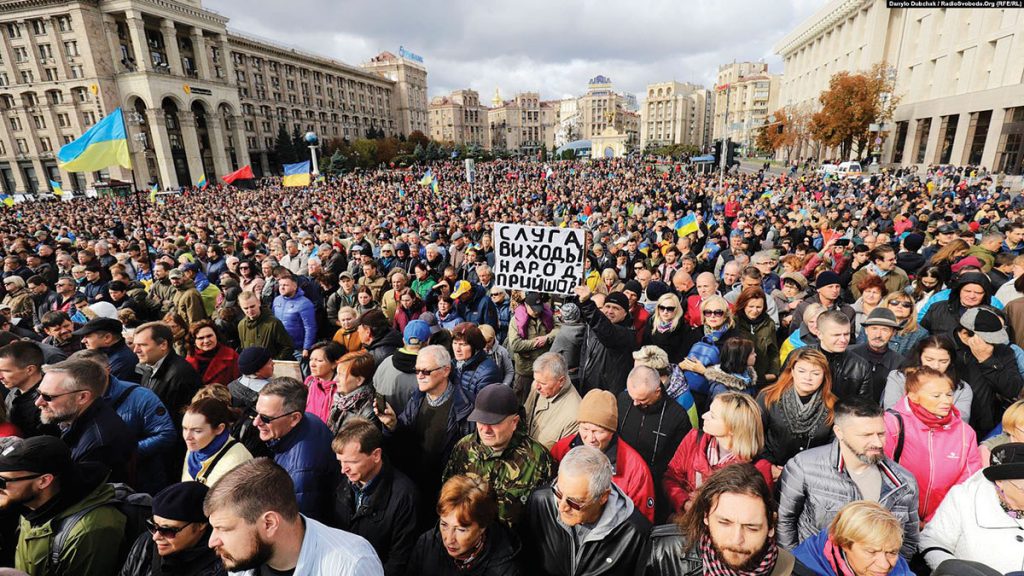 Danylo Dubchak/RadioSvoboda.org
Thousands rallied in Kyiv on October 6 to protest what they see as the Zelenskyy administration’s capitulation to Russia. 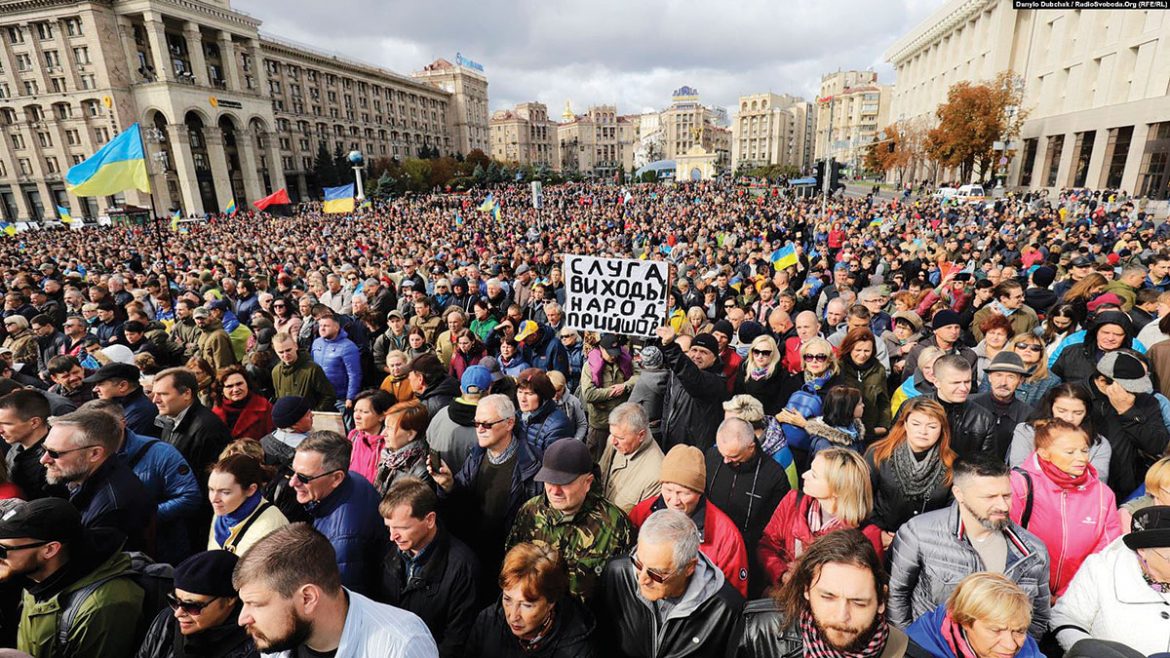 KYIV – Despite continuing reassurances from the Zelenskyy administration that it will not yield on fundamental issues concerning Ukraine’s sovereignty and territorial integrity, protests against what many see as Kyiv’s “capitulation” before Russia by accepting the controversial “Steinmeier formula” have intensified and spread.

On October 6 more than 10,000 people demonstrated on Kyiv’s Maidan, making it the largest public protest since the Revolution of Dignity. Protests were also held in numerous cities all across the country. Several city and oblast councils in both western and eastern Ukraine have come out against the Steinmeier formula.

On October 9 there was a new ominous development. Scuffles broke out near the village of Zolote in the Donbas between police and radical activists seeking to prevent the pullback of government troops. Deputy Prosecutor General Viktor Chumak, who is the chief prosecutor for the military, called on the demonstrators to operate within the law and not try to take matters into their own hands. But the leader of the activists, Andriy Biletsky, a former national deputy and now head of the far-right vigilante group known as the National Corps, responded that they would “keep pressing until the end.”

Not surprisingly, these issues received considerable attention at the “media marathon,” a free-ranging press conference convened by President Zelenskyy on October 10. Pressed hard by journalists, he acknowledged that part of the reason for the current situation is shortcomings on his administration’s side in communicating about what was happening and really at stake to the population. But he also claimed that his political opponents were spreading confusion and fear for political purposes.

The key bone of contention remains the now notorious and still vague Steinmeier formula. It was proposed by the German side and accepted by President Petro Poroshenko on behalf of Ukraine in 2016 as a means of activating the stalled Minsk accords of 2014-2015 on regulating the Russian-Ukrainian conflict in the Donbas.

The original Minsk accords, particularly the Package of Measures for the Implementation of the Minsk Agreements agreed by the Trilateral Contact Group on February 12, 2015, contained numerous steps to initiate a peace process in the Donbas. They included a ceasefire, disengagement of forces, disarming of armed bands, amnesty for those involved on the “separatist” side, Ukraine regaining control of the border with Russia, free elections under Ukrainian law and OSCE monitoring, temporary local self-government, economic rehabilitation, and constitutional amendments to be made by the Ukrainian Parliament providing for a permanent special status for the areas currently occupied.

The Ukrainian side remained frustrated by Russia’s continuing pretense that it is not involved in the war and insistence that Kyiv deal directly with its proxies. Consequently, Kyiv regarded the imperfect Minsk agreements as measures imposed on it in adverse conditions but which had nevertheless enabled Ukraine to halt Russia’s aggression and build a viable army.

The Minsk process has remained deadlocked for almost five years. The Steinmeier formula was placed on the agenda at the last summit in this format in Paris in October 2016. In essence, it involves initially accepting two components of the overall roadmap agreed to in Minsk: free elections and the simultaneous introduction of a special status for the occupied areas as the basis for the further elaboration of a peace process. Kyiv was, and remains reluctant, to embrace the Steinmeier formula removed from additional vital details pertaining to Ukraine’s security and sovereignty.

It is only with the election of a new president in Ukraine that the Normandy Four leaders (Germany, France, Ukraine and Russia) have indicated that at last there might be some scope for moving ahead. Last month, after the encouraging breakthrough that led to the exchange of captives between Moscow and Kyiv, Russia suddenly made acceptance of the Steinmeier formula a prerequisite for a new summit within this format and thus placed the new talks in jeopardy.

Eventually, citing the importance of moving forward, on October 1 Kyiv agreed. It also agreed to pulling back from the so-called contact line with the Russian-backed fighters in Zolote and Petrivske. This process of disengagement began in June in Stanytsia Luhanska to allow a vital badly damaged bridge to be repaired. Initially, the Zelenskyy administration had pressed unsuccessfully for disengagement along the entire contact line. Activists from the far right maintain that the disengagement will leave the local inhabitants exposed to Russian-backed militants’ attacks and that they need to be protected.

Mr. Zelenskyy has repeatedly insisted that none of this will entail concessions to Moscow and that there are clear “red lines” that Ukraine will not cross. Without initially preparing the Ukrainian public properly for Kyiv’s demarche, he nevertheless left himself open to immediate accusations of capitulation and betrayal.

Not only have the street protests spread and a vigilante group sought to obstruct the disengagement on the contact line, but also the oblast councils in the Lviv, Ivano-Frankivsk and Khmelnytsky regions and the city councils of Sumy and Kropyvnytsky have voiced their opposition to the Steinmeier formula.

Within the Verkhovna Rada, national deputies from the European Strategy and Holos parties have also come out against it. Inna Sovsun, a lawmaker from Holos, told the press at the protest rally on the Maidan on October 6: “We will do our best so that Parliament does not support any special status, any conditions that Russia or [Vladimir] Putin impose on us.”

The political director of Ukraine’s Ministry of Foreign Affairs, Oleksii Makeiev, considers such fears as misplaced. On October 9 he stressed that “Nobody will allow the election of any presidents, any autonomies there, because Ukraine is a unitary state.” Ukraine insists, and is “also supported by our partners in the Normandy format, that the troops must be withdrawn and Ukraine enabled to restore its sovereignty over the currently occupied territory.” The elections there would be declared democratic only when OSCE observers confirm that “there are no criminals with machine guns at the polling stations, no tanks near the polling stations, that any citizen of Ukraine living in this territory can come and vote, including 1.5 million temporarily displaced persons.”

This week, while on an official visit to Georgia, German President Frank-Walter Steinmeier also had an opportunity to explain the origins and purpose of his proposal. He told the press in Tbilisi on October 7: “The formula contained nothing more than attempting to turn the big steps that neither side could accept into smaller steps that would be negotiated as to their contents and sequence.” Mr. Steinmeier rejected suggestions that his plan had been inspired by “Russian influence.” This argument amazes him, he stressed, because Ukraine had been represented in the discussions about it in the Normandy Four format.

Meanwhile, Russian-backed forces have shown no signs of wanting to facilitate a ceasefire and a disengagement of forces. They have maintained their attacks, mainly through shelling, resulting in more soldiers killed and wounded on the Ukrainian side. Consequently, on October 7, Ukraine’s Minister of Foreign Affairs Vadym Prystaiko announced that the pullback of forces around the village of Petrivske and Zolote was being postponed for another seven days, to allow “the parties” to prove that they “have serious intentions and are ready for further steps.”

With such a strong reaction within Ukraine to the Steinmeier formula and the repeated assurances from the Zelenskyy team that it is not prepared to give in to Russian pressure, or yield to “friendly” encouragement from Berlin and Paris to make concessions that would damage Ukraine’s interests, Moscow itself appears to be stalling again with the Normandy Four Summit.

On October 8 Mr. Prystaiko said “I think that when feeling that pressure has been growing, that Ukraine is taking certain real steps, Russia is forced to look for new and new conditions to block that meeting.”

The Russian president’s spokesman Dmitry Peskov has also evaded confirming that the Kremlin can guarantee the disengagement of troops from the contact line in the Donbas, denying once again that Russia is a party to the conflict. “The Kremlin certainly has some influence,” he said, but “the republics of the Donbas” in this case are “independent subjects of the settlement of this conflict.”

Perhaps the only surprise in this regard were comments made by Belarusian President Aleksandr Lukashenko shortly after a visit to Ukraine and meeting with President Zelenskyy. On October 8, speaking at a security meeting in Minsk, he said that Russia and Ukraine are the main sides in the Donbas war, stressed that the conflict cannot be resolved without the participation of the United States, and blamed Europe for not doing enough to help Mr. Zelenskyy and Ukraine in their predicament. “And Europe remains silent – you know who I am speaking about – both from the East and the West,” he added.

On October 10 President Zelenskyy shared some new information and his thoughts on these matters with journalists. He confirmed that he had a telephone conversation with German Chancellor Angela Merkel the day before about the status of the preparations for the Normandy Four summit. He told the press that she is working hard behind the scenes to ensure that the summit is held and said he personally is also thinking about how to add the issue of Russia’s occupation of Crimea to the agenda.

Mr. Zelenskyy also revealed that a major new exchange of captives is being prepared, but that Russia is insisting that it is carried out after a successful summit. He considers this is matter of great urgency and is ready to take up the issue of the release of Ukrainians held by Russia in direct telephone contacts with President Putin.

Alluding to his political opponent, former President Poroshenko, who has been heading the campaign against the Steinmeier formula, Mr. Zelenskyy added that Chancellor Merkel had expressed surprise that those who had been with her in searching for a peaceful solution were now condemning what had been done. He conceded that work on better informing the public and alleviating confusion and concern needed to be carried out, but warned that there are those who, instead of promoting understanding and unity around the cause of peace, are deliberately fostering division for political purposes.