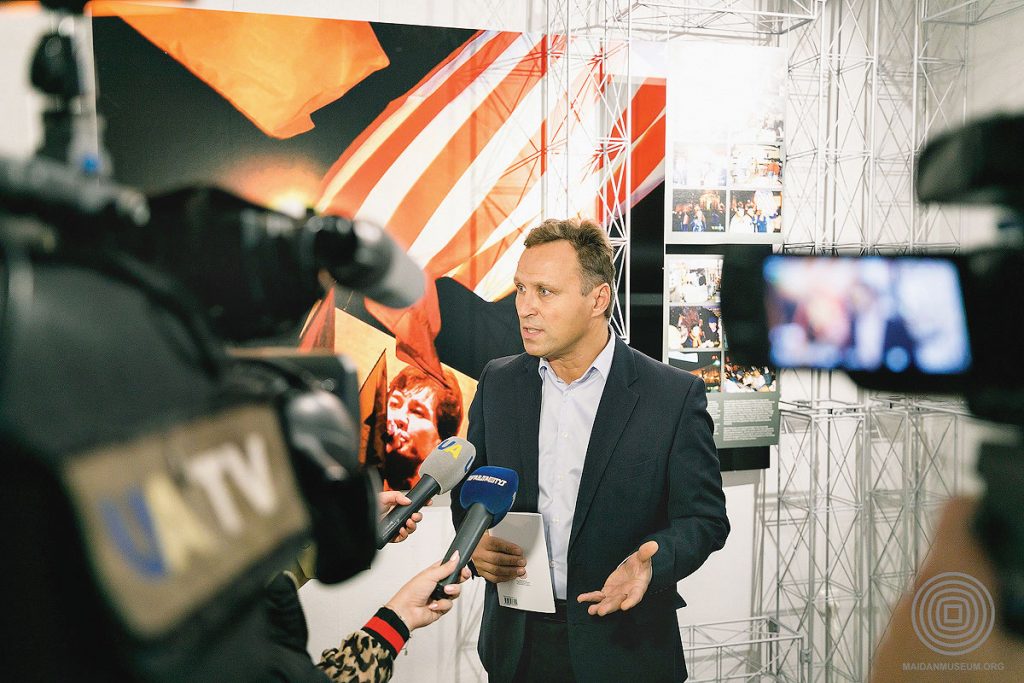 Bohdan Poshyvailo
Ihor Poshyvailo, director of the National Museum of the Revolution of Dignity.

KYIV – Five years ago, on August 19, 2014, 55-year-old Mark (Markian) Paslaws­ky (codename “Franko”) – a Ukrainian American volunteer with the Donbas Battalion of the Ukrainian National Guard – was killed in the battle of Ilovaisk. He was covering for his retreating unit and saved the lives of several fellow soldiers at the expense of his own.

On the eve of the anniversary of his death, the National Museum of the Revolution of Dignity together with the Museum of the Ukrainian Diaspora opened the exhibition “New York – Ilovaisk: The Choice,” dedicated to Paslawsky and the fifth anniversary of the events in Ilovaisk.

Markian Paslawsky was born in 1959 in an immigrant family in New York. As a child he belonged to the Ukrainian scouting organization Plast. He graduated from the U.S. Military Academy at West Point and served in the 75th Ranger Regiment of the U.S. Army Special Operations Command. After demobilization, he got a degree in economics, and after Ukraine declared independence, he returned to his historic homeland. He established a profitable agricultural business called Rosava-K in the Kyiv region (which was forcibly taken over after his death). He took part in the Orange Revolution and later in the Revolution of Dignity. He became a Ukrainian citizen and went to war. He was killed, but left his mark. He is buried at Askold’s Grave in Kyiv.

At the entrance to the exhibition at the Museum of the Ukrainian Diaspora (vulytsia Moskovska 40-B), visitors are offered a booklet titled “Call to Action: the Words of Markian Paslawsky.” This is a collection of Paslawsky’s thoughts on all the key branches of Ukraine’s public life – economics, the financial sector, politics, education, the military – with ideas for their possible development. Paslawsky even addresses prickly subjects like the shadow economy, dual citizenship, election funding, the social means of mass information, etc. He explains complex processes in a way that is simple and accessible.

“Markian’s story is multifaceted,” says the director of the National Museum of the Revolution of Dignity, Ihor Poshyvailo. “It’s about choice. Mark made his choice. He grew up in a Western democracy. He knew what was needed to defend freedom, democracy and national independence. Above all [a country needs]economic foundations, economic independence. Second – military might. And perhaps that’s why he became a soldier. But when Ukraine became independent, Mark came to Ukraine and became an economist. And he probably wanted very much to be a part of these changes and reforms.”

An American in the Donbas Battalion

In a separate room in the museum, visitors can watch fragments of the documentary film “Made in Ukraine: Life after Life,” directed by Oleh Ushchenko. It contains eyewitness accounts of those who served together with Paslawsky and of the exit from surrounded Ilovaisk. Some admit they’d rather not remember.

“I first saw him in Novi Petrivtsi, when our battalion was forming,” recalls Mark’s comrade in arms Vadym Haidin (code name “Meister”). “It was impossible to miss Franko, since he had a Ukrainian American accent. He stood out in the midst of the Russian-speaking Donbas Battalion… Plus Franko was brutally critical of the conditions of today’s army. He was outraged by the Soviet-era rudiments in the National Guard, these tents. He would swear in a mix of Ukrainian and English.”

“I see a large, stately person approaching and get excited that finally our army has hired an American instructor to train us and help,” says Meister with a smile. It turned out he was one of their own. Haidin and Paslawsky ended up in one unit, where they trained with Alpha special operations experts. There they became friends; they were both older than most of the other guys and were “on the same wavelength.”

Meister recalls that everyone respected Paslawsky. He categorically refused the status of an instructor or commander – he wanted to be a regular soldier.

“The day before storming Ilovaisk, we were sitting in our quarters and he said, ‘Guys, don’t be heroic! Just do your job!’” recalls Meister. “But Franko died a hero. He was killed when covering the escape of the main storming group, and thanks to this tens of lives were saved.”

Markian’s mother, Orysia Paslawsky, was present at the opening of the exhibition about him. Mr. Haidin ceremoniously presented her with the civic award – the Volunteer’s Knight’s Cross.

“I knew Franko – this would have been the highest honor for him, even more than a national honor,” said Meister, “precisely because it comes from the guys themselves.”

On September 25, 2015, by presidential decree Paslawsky was posthumously decorated with the Order of Danylo Halytskyi.

Four museum galleries contain photos of Paslawsky, beginning with childhood, and of his family; his U.S. Rangers dress uniform; artifacts from the Maidan and the war. His biography, recollections of friends and co-combatants, and all other information is in Ukrainian and English.

Despite its modest size, the exhibition is comprehensive; it presents the story of Paslawsky’s life and that of the Ilovaisk tragedy, where he met his end. After visiting the exhibition, it feels like you knew him personally.

“I studied together with Mark in 1981, but we didn’t know each other,” says West Point classmate Sam Hartwell. “I came to Ukraine to work in finance and Mark was also in this field. By chance we ended up in the same bank, got acquainted and discovered we were classmates. … This was around 1994. I lived in Ukraine for three more years, and we were the best of friends.”

Mr. Hartwell recalls that Paslawsky was interested in history and international relations, and read a lot of scientific literature.

“We also discussed military and world history, we talked about Russia’s politics of force and the American-Russian standoff. Mark was a very educated, intellectual guy. And he was an extremely honest person who despised dishonesty, especially in politics – be it in Ukraine, Russia, or the U.S. We talked a lot about these things,” says Mr. Hartwell.

Exhibit on view until October 20

The exhibition “New York – Ilovaisk: The Choice” is at the Museum of the Diaspora in Kyiv until October 20. Its organizers have also planned a documentary film screening, discussions and presentations.

They also intend for it to travel to other Ukrainian cities, as well as to the U.S. According to the museum’s director, Mr. Poshyvailo, the eighth U.S. Secretary of Veterans Affairs Robert McDonald (also a West Point graduate) has voiced his commitment to help.

The exhibition was organized through the support of volunteer soldiers from the Donbas Battalion, from the Kyiv History Museum and the Paslawsky family.

Part of the current exhibition was shown at The Ukrainian Museum in New York in 2015, according to Paslawsky’s brother Nestor Paslawsky. He says that many Americans attended due to interest in the war in the Donbas – a topic that concerns more than just the Ukrainian diaspora.

According to Nestor Paslawsky, the war in Ukraine is less talked about in the U.S. than in 2014. However, it is still relevant, especially in light of the relationship between Presidents Donald Trump and Vladimir Putin.

“Now people have a greater understanding that Ukraine exists, that it is independent,” he says. “The way Americans see Ukraine has changed since Maidan.”

American veteran, photojournalist and writer, and West Point graduate Jenn Blatty attended the exhibition opening. For the past couple of years, she has been working on a project about Ukrainian volunteer fighters and regularly travels to the Donbas.

“Honestly, I think that America is not doing enough to help Ukraine in this war,” she says. “But even if the politicians aren’t doing enough, the real leaders are. And Mark was such a person.”

“Mark was a true patriot, and now, after learning more about him, I am even more proud that I graduated from West Point,” remarked Ms. Blatty.

“We have to remember people like this. Others can learn from their histories,” declared Paslawsky’s friend Mr. Ushchenko.

The story of Mark Paslawsky “Franko” is somewhat similar to that of another fallen hero of the war in the Donbas – opera singer Vasyl Slipak (codename “Myth”). Slipak returned to his native Ukraine from France, joined the volunteer militia of the Right Sector and was killed in battle in Svitlodarsk.

Their stories have become an embodiment of the war in Ukraine. As symbols, they go beyond the borders of Ukraine and even Europe, reminding us that no one is safe from the aggressor. That peace can only be achieved through maximum engagement and awareness. And that it is never without victims.

Olena Maksymenko is a journalist, writer, photographer and volunteer. In 2013-2014, she was an active participant of the Revolution of Dignity. In March 2014, she went in Crimea to write an article but was kidnapped with her colleagues by pro-Russian terrorists and spent three days in a prison. In 2015 she joined a volunteer battalion. She now works as a military correspondent.

The article above is translated by Larissa Babij from the original Ukrainian story published by Novynarnia on August 19. It appears here in a slightly abridged version.