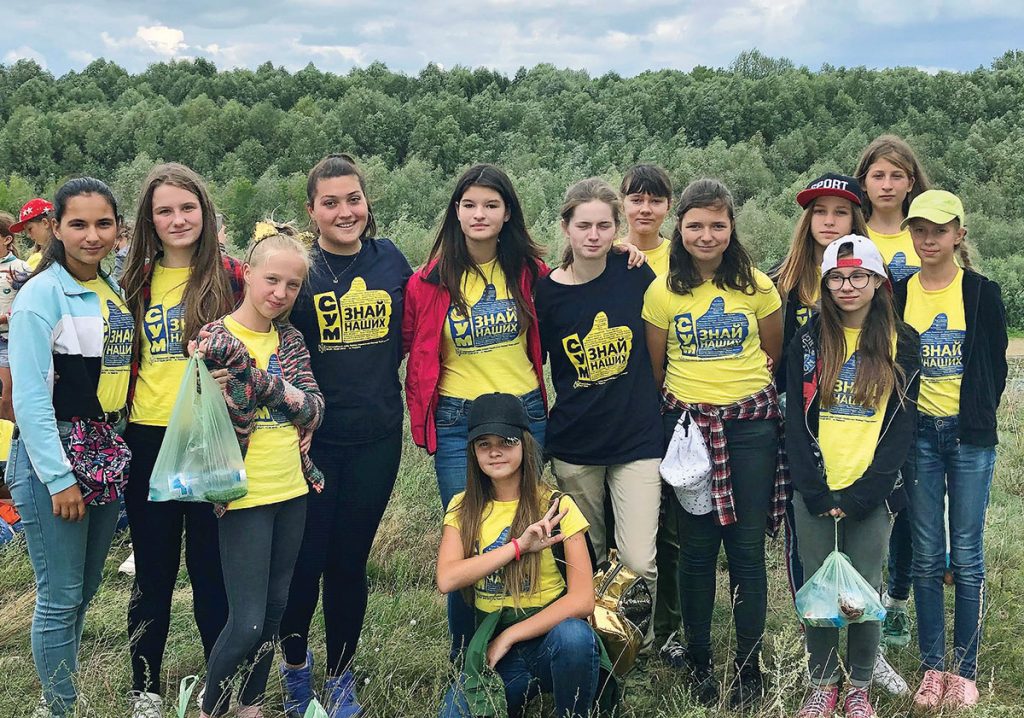 Staff | The Ukrainian Weekly | Subscription
Participant Marianna Semanyshyn with her group of girls on the banks of the Desna River.

NEW YORK – Since 2010, the Ukrainian American Youth Association (UAYA) has sent young adults to Ukraine to participate in an exchange program. The exchange occurs with UAYA’s sister organization, the Ukrainian Youth Association of Ukraine (UYA). The mission of this program is to facilitate the exchange of ideas, best practices and life experiences between the counselors and junior counselors of the two countries.

In previous years, UAYA members went to Ukraine to work at children’s camp for UYA members, but the focus of the exchange program has changed for the U.S. participants since 2017. For the last three years, starting a year after the Euro-Maidan, the U.S. participants have volunteered at a Charitable Camp (Blahodiynyi Tabir) for orphans of the warriors of ATO and the refugee children of the war in eastern Ukraine.

The UYA has organized and hosted this Charitable Camp in various cities of Ukraine. Funding for the camp comes from donations and pledges from UYA organizations in the diaspora, such as the UAYA. The children participating in the two-week camp do not pay to participate.

In response to the UYA world governing body’s call for volunteers to staff this year’s camp, the U.S. Exchange Program’s Selection Committee decided to have this year’s participants help staff the Charitable Camp. The committee felt this decision would keep the program’s mission intact while adding another dimension to the program by concentrating on Ukrainians directly affected by the war in the east.

The participants of the camp were children age 6-16 who have been touched by the war. Some children have one of their parents fighting in the war; others have a parent that was wounded or disabled; others have lost a parent in the war. Some children live near the battle lines and attend the camp as their “vacation” from the fighting. Many children are displaced, having had their homes destroyed. These needy children were identified and invited to attend the Charitable Camp as part of a tedious process of community outreach by members of UYA in Ukraine.

The Charitable Camp was nestled in the beautiful pine forest outside of Chernihiv in northern Ukraine during the first two weeks of August. It was organized according to UYA guidelines, though it was the first introduction to UYA for many of the camp’s participants and counselors who came from war-torn areas. The American participants of the exchange program had the opportunity to work with service members of the war in eastern Ukraine – some of whom were taking a leave of absence from the fighting – and with adults who were affected by war, many of whom are displaced and living in new cities. The adults were identified by community outreach and recruited to volunteer as counselors. This is the first introduction to volunteerism for many of these individuals, and they were intrigued by an organization whose goal it is to raise children on Christian and nationalistic principles.

Following are some of their impressions of their experience.

Ms. Semanyshyn: Going to Ukraine for a program through which I had to work with children who were affected by the ongoing war in Ukraine was such a humbling experience. Going as an adult to Ukraine showed me the real world. Although I was extremely nervous and did not know what to expect, I ended up crying when I was leaving. I truly hope that people will become more open-minded and be willing to learn how to help countries being destroyed by wars. Together, we can help one another rise up and become stronger individuals and as a nation alike.

Ms. Bihun: Saying good-bye to campers after two weeks has never been an easy task for me in all my years of working as a counselor. However, after spending mornings dancing with my 6- to 9-year-old girls, chasing them down to see who left their shirt in the refrigerator (yes, I said a refrigerator) and every night singing them lullabies, I found leaving them to be nearly impossible. …working with children and counselors who were touched in some way by the war in eastern Ukraine made this an especially unique group of people to connect with. I was able to learn from, collaborate with, laugh alongside, and be humbled by so many incredible and resilient people.

While the goal of an exchange of ideas seemed straight forward, I initially failed to realize what forms these ideas could take. There were incredible memories to be formed. Some of them include line and group dances paired to upbeat music, a picnic along the beautiful river Desna, incentivizing participation by using Chupa Chups (their favorite lollipops), creating animations, and learning that one man’s trash is another’s art were all concepts passed around during our brief two weeks in the woods.

Being a Ukrainian American can lead to a knowledge gap between what is reported about Ukraine and what is actually going on there. Different cultural and political events have been unraveling in the past few years, and who better to teach us about them than the people who are living through it. This glimpse into Ukrainian life is what I found to be one of the most valuable and important takeaways from the exchange program. Although I was not quite sure what to expect, this experience did not disappoint, I walk away with new friends and long lasting memories.

Ms. Chychula: I am a second-generation Ukrainian whose parents have raised me to have an immense love for my heritage and culture. I have always dreamed of going to Ukraine to get in touch with who I am. This exchange gave me the chance to go to Ukraine for the first time in my life, and it made me fall even more in love with my heritage.

The children were the highlight of my entire exchange experience. The ability to have a positive influence on the lives of children who have been through so much tragedy is life-altering. It was amazing and heartbreaking learning about each child’s experiences and gratifying to see how they formed such lasting bonds with the counselors and with each other. The children learned organization and discipline through the fun yet activity-packed schedule, which gave them tools they can use to be successful in their lives. I had the opportunity to teach lessons about the Ukrainian diaspora, and it was remarkable seeing the children open their minds to the world and to their own potential.

Being able to travel to Ukraine as a part of UAYA and volunteering in a charity camp was one of the most enriching experiences in my life. I left this camp with some of the most amazing memories. I look forward to returning and exploring my Ukraine.

Readers can watch the multimedia presentation of the exchange participants on the UAYA page at cym.org/us.