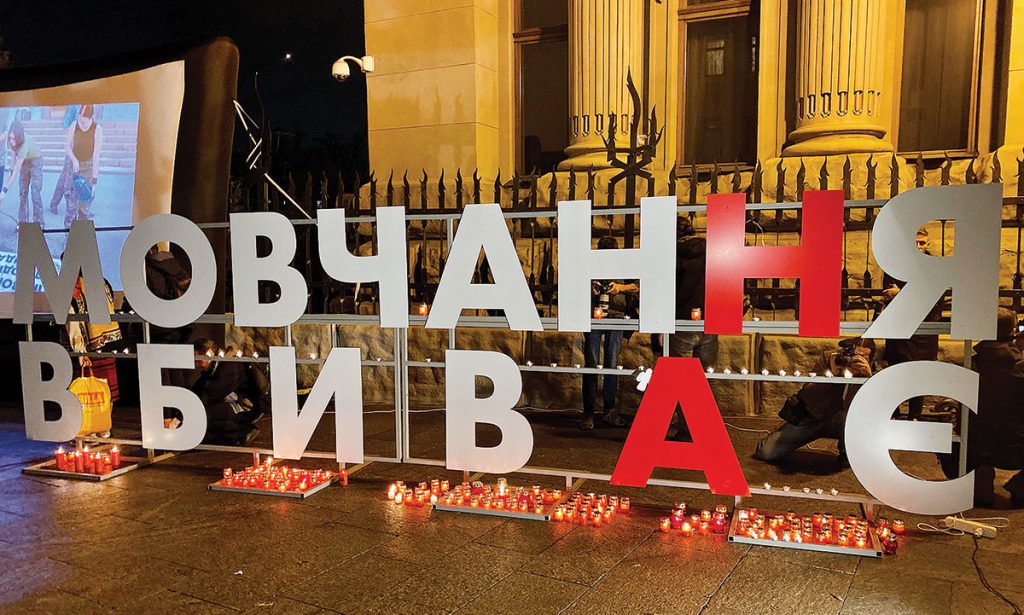 Roman Tymotsko
“Silence kills” proclaims a sign at the remembrance event held near the Presidential Office of Ukraine one year after the death of anti-corruption activist Kateryna Handzyuk.

KYIV – Kateryna Handzyuk, or Katya, as friends and fellow activists called her, was an anti-corruption activist in Kherson. On July 31, 2018, she was attacked with sulfuric acid in front of her house. Three months later, she died of her injuries. Now, a year after her death, the main question in the case still has no answer: Who ordered the killing of Katya Handzyuk?

On November 4, several hundred people gathered on Bankova Street, a small street in central Kyiv where the Presidential Office of Ukraine is located. After Volodymyr Zelenskyy was inaugurated as president, one of his first decisions was to remove the fences that had blocked the entrance to Bankova, where the building formerly known as the Presidential Administration stands. As a result, the public now has access to the front door of the Presidential Office.

The movement seeking justice in the Handzyuk case is known by the main question it poses to the authorities – “Who killed Katya Handzyuk?” Activists continue to ask this question, most recently in front of President Zelenskyy’s window. The demonstration started with the screening of a short documentary that tells the story of Handzyuk’s activism and death, focused on the corrupt investigation of her murder.

When the film on screen morphed into an illustration of the anti-corruption activist with a huge red mark on her face, music started playing. Demonstrators brought a huge red sign with the message “Silence kills.” As the music continued, dozens of people began moving toward the sign with lit candles. When all of the memorial lights were placed in a row, a minute of silence was observed.

Most of the activists then headed to the Ministry of Internal Affairs to demand action in solving the Handzyuk murder.

Kateryna Handzyuk (born June 17, 1985) was a civil rights and anti-corruption activist. She was a deputy of the Kherson Oblast Council and the Kherson City Council, as well as an adviser to the mayor of Kherson. She frequently criticized the security authorities and especially condemned corruption in the regional department of the Ministry of Internal Affairs. Handzyuk exposed the police’s involvement in several cases of fraud.

Before she was attacked, Handzyuk publicly spoke out against the illegal wood trade taking place near Kherson. At the beginning of July, Handzyuk, then a deputy mayor at the time, wrote a Facebook post with a picture of a truck fully loaded with wood. She accused the head of the Kherson Oblast Council, Vladyslav Manher, and Kherson Governor Andriy Gordeev of involvement in corrupt schemes of wood sales.

Her friends say that Handzyuk had a history of rivalry with Mr. Manher dating back to the last local elections four years ago. Mr. Manher was one of the primary candidates for head of the Kherson City Council, but he lost to Volodymyr Myko­la­yenko, on whose team Handziuk played a leading role.

On July 31, 2018, just a few weeks after Handzyuk went public with information on corruption in the wood trade, she was attacked with a liter of sulfuric acid. She suffered chemical burns on 40 percent of her body. The first arrest in the case came only four days after the attack. Mykola Novikov was the main suspect, and he spent almost three weeks in detention before his alibi was proven thanks to journalists carrying out a parallel investigation.

Thanks to the massive pressure of activists and journalists, the Security Service of Ukraine and the police arrested five new suspects by the end of August. Four of them admitted their involvement in the attack. But those who ordered the attack remained at large.

Months of ineffective investigations were accompanied by pressure from society. It is worth noting that this was not a unique case – in 2018 alone, more than 50 attacks on activists remained unsolved. The European Commissioner for Enlargement and European Neighborhood Policy Johannes Hahn wrote on Twitter that “Attacks on civil society activists are unacceptable. Those responsible for this insidious crime must be held accountable.”

Dozens of demonstrations throughout Ukraine became larger and more demanding after November 4, 2018, the day that Handzyuk died at the age of 33 in a Kyiv hospital. As a direct result of the acid attack, she had suffered multiple organ failure, a fact confirmed by President Poroshenko that same evening.

A day after Handzyuk’s death, a friend published on Facebook an accusation against a person alleged to be the middleman in the murder. The talk was about a Kherson businessman, Ihor Pavlovsky. At this point, the case became more political. It was the beginning of the presidential election campaign, and Mr. Pavlovsky was an official aide to a lawmaker from Mr. Poroshenko’s parliamentary faction. Prosecutor General Yurii Lutsenko reacted by accusing Handzyuk’s friends of slowing down the investigation by publishing the name of a possible suspect. But in a few days, officers of the Security Service of Ukraine arrested Mr. Pavlovsky in Kherson and brought him to Kyiv.

At the end of January, Handzyuk’s father accused Mr. Poroshenko and Yulia Tymoshenko, who at the time were in the active phase of campaigning, of covering up for their party members. Thanks to information from parallel investigations, he accused three officials of ordering his daughter’s killing: Mr. Manher, Mr. Gordeev and Mr. Gordeev’s deputy, Yevhen Ryshchuk.

As a result of pressure, or for political dividends, Ms. Tymoshenko expelled Mr. Manher from her party. There was no reaction from Mr. Poroshenko, but his team member Mr. Lutsenko charged Mr. Manher with organizing Handzyuk’s murder and said there is evidence against Mr. Ryshchuk. Ms. Tymoshenko responded by saying that Mr. Lutsenko was attacking her party and covering up for members of the Poroshenko team.

In the following months, those three names – Manher, Gordeev and Ryshchuk – appeared on banners carried by anti-corruption activists. They brought it to numerous events where Mr. Poroshenko appeared. Nonetheless, by the end of his presidency, there still was no result.

No significant progress in case

Since Mr. Zelensky and his Servant of the People party came to power, no significant progress has been made in the Handzyuk case. On November 4, the president wrote on Facebook that all those who ordered the attack “will be found and punished. I promise.”

Kherson Oblast Council Chairman Manher, who is accused of ordering the attack on Handzyuk, had posted bail of 2.5 million hrv in February. Then, on November 25, a Kyiv court decreased his bail by more than half – now it is 1 million hrv (around $40,000 U.S.). His lawyers argued that the reduction was justified because Mr. Manher is now accused not of ordering the murder, but of ordering grievous bodily harm. Thus, observers say, the main suspect now has even more chances to get away with murder.

The question of who is responsible for the murder of Katya Handzyuk still has not been answered. And now, demonstrators say, it is the responsibility of Ukraine’s new government officials to provide an answer.