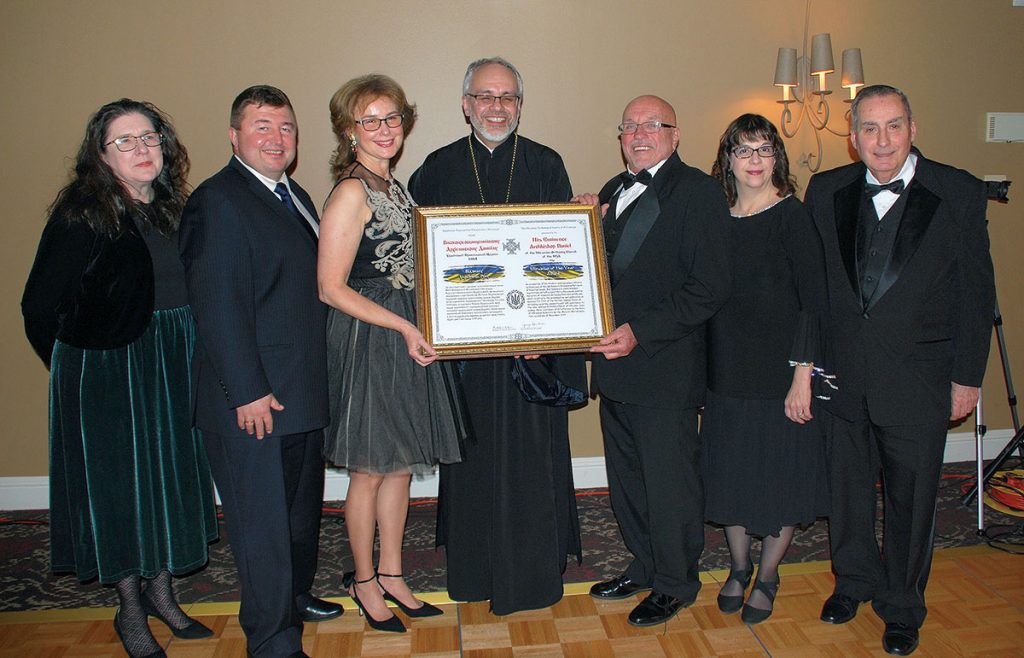 PITTSBURGH – The 49th Ukrainian of the Year Award was presented to Archbishop Daniel of the Ukrainian Orthodox Church of the U.S.A. by the Ukrainian Technological Society of Pittsburgh at its annual dinner-dance on November 2 at The Club at Nevillewood in Presto, Pa.

The guests comprised Ukrainian Catholic and Ukrainian Orthodox believers, including at least 25 college-age students. All were welcomed by UTS President George Honchar, who also made introductions.

Metropolitan Antony, Protopresbyter George Hnatko, Dean of the Pittsburgh Deanery, along with many Orthodox priests, deacons and panimatkas from Western Pennsylvania were also introduced, as were the Very Rev. Michael Hontaruk and Panimatka Hanna from Parma, Ohio, and the Very Rev. Vasyl Sendeha and Sandra Hladky, parish president, from Palos Park, Ill., as well as the Ukrainian Catholic pastor from nearby Carnegie, Pa., the Rev. Jason Charron. Nine students from the St. Sophia Ukrainian Orthodox Theological Seminary in South Bound Brook, N.J., were recognized.

Traveling from afar were Marina K. Morari from Switzerland, Daria P. Komichak with husband, Michael, from New Jersey, and Vera Kochno Guertler with family and friend from Lancaster, Pa. Myroslav Kastran from the Consulate General of Ukraine in New York City was a special guest.

President Honchar then asked UTS member the Rev. Mark Swindle to make the nomination of Archbishop Daniel as the Ukrainian of the Year. Speaking in Ukrainian and English, Father Swindle noted that “Archbishop Daniel has been influential in his numerous meetings with Ecumenical Patriarch Bartholomew, and top political figures in Ukraine, which included the past president, Petro Poroshenko. A new page has opened in the history of Ukraine, and Archbishop Daniel has assisted in writing it. The autocephalous Orthodox Church of Ukraine has finally received the Tomos from the Ecumenical Patriarch, from the Mother Church.”

Before the presentation of the award plaque, created by graphic artist Taras Davyda, by President Honchar, its Ukrainian and English texts recognizing the dedicated efforts of Archbishop Daniel in securing the granting of the Tomos of Autocephaly, were read by Dr. Natalia Onufrey and Dr. Natalia Kujdych, respectively.

Archbishop Daniel began his acceptance remarks by stating that in accepting the award, he was doing so on behalf of all the hierarchs, priests and laypeople who prayed and suffered through appeal upon appeal for the return of autocephaly to the Orthodox Metropolinate of Kyiv from that tragic year of 1686, which began hundreds of years of interference in the Ukrainian Orthodox Church by the Moscow Patriarchate of the Russian Orthodox Church. His Eminence then informed the guests, who listened in rapt silence, about the series of events leading up to the granting of the Tomos of Autocephaly.

The hierarchs and bishops were so joyous that they ran outside to announce the good news to the approximately 20,000 faithful waiting outside. Archbishop Daniel, realizing the historical importance of the unification vote, gathered up all the abandoned ballots and papers and has brought them back to the U.S.

The Tomos of Autocephaly was presented to Metropolitan Epifaniy by Ecumenical Patriarch Bartholomew on January 6 in Istanbul, Turkey.

Significantly, Archbishop Daniel pointed out that all the hierarchs of the Moscow Patriarchate, which controlled the Ukrainian Orthodox Church – Moscow Patriarchate in Ukraine, were invited to attend the meetings deciding the autocephaly question, but they refused to attend (except for two who attended the Unification Synod). President Poroshenko also invited them to talk with him. Again, they refused to talk. Instead, they severed all relations with the Ecumenical Patriarch and the Mother Church.

To a non-Orthodox observer, the actions of the hierarchs of the Moscow Patriarchate are quite incomprehensible. They claimed the granting of autocephaly to the Ukrainian Church would split the worldwide Orthodox Church, but, in fact, they themselves have become schismatics by their own choosing, Archbishop Daniel said. The fundamental tenet of Christian Orthodoxy is communal decision-making, with all parties invited to the table. The hierarchs of the Moscow Patriarchate were invited to come and discuss, but they refused to do so. One must ask, are they now then really “Orthodox?” Will they wither on the vine, now that they have refused to work with the Holy Spirit to effect the prayer of Jesus the Christ “That they all may be one,” (John 17:21).

As Archbishop Daniel noted, the granting of autocephaly to the unified Orthodox Church of Ukraine will have geopolitical ramifications.

After the delicious meal, Father Charron, who grew up in Canada, expressed his belief that “signs of spring” are around the corner in Ukraine, and that divisions in the Christian Church there will now be resolved under the influence of the Holy Spirit. He then prayed the benediction. Dancing to the music of Orkestar Zabava was then enjoyed by all to complete the evening.

To learn more about the Ukrainian Technological Society, to view photographs from the dinner-dance, and to view and hear Archbishop Daniel’s remarks, readers may visit the society’s website at www.utspgh.org. The honoree’s remarks are also available at www.pittau.com.