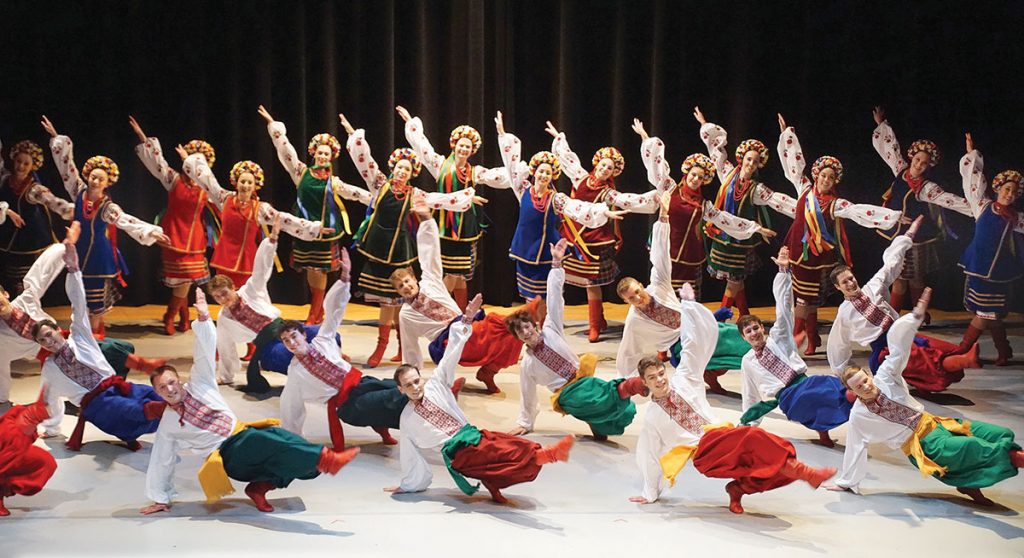 Christine Syzonenko
The Ukrainian Shumka Dancers in their “Classic Hopak,” the finale to the Ukrainian National Association’s 125th anniversary concert.

MORRISTOWN, N.J. – The Ukrainian National Association celebrated its 125th anniversary in grand style on Saturday, November 2, presenting a gala concert for the Ukrainian community that included top performers from Canada, Ukraine and the United States.

Tickets to the concert – which featured the Ukrainian Shumka Dancers, singer Khrystyna Soloviy, violinist Vasyl Popadiuk and the Women’s Bandura Ensemble of North America – were sold out. The venue was the state-of-the art Dolan Performance Hall on the campus of the College of St. Elizabeth in Morristown, N.J., not far from the UNA’s Home Office in Parsippany.

A special prayer was offered at the beginning of the program by Metropolitan-Archbishop Borys Gudziak of the Ukrainian Catholic Church, and words of welcome were addressed to the audience by UNA President/CEO Stefan Kaczaraj. The master of ceremonies for the jubilee event was Roman Hirniak.

The concert began with Shumka of Edmonton, Alberta, presenting “Tradition in Motion,” a dance spectacular over 20 minutes in length that spotlighted the Volyn, Polissia, Lemkivshchyna, Podillia, Zakarpattia and Bukovyna regions of Ukraine. According to concert organizers, this was Shumka’s first appearance in the United States since 2005. Thirty-four dancers traveled to New Jersey for the concert.

Mr. Popadiuk, who hails from Lviv and calls Ottawa his home, demonstrated his well-known virtuosity in four very different music selections that reflected the heritages of both Ukraine and America. He has appeared around the globe, performing for dignitaries and at such special events as the Calgary Winter Olympics and Soyuzivka Heritage Center’s annual Ukrainian Cultural Festival.

Khrystyna Soloviy, accompanied by her four-member band, made her North American debut at the UNA concert. The 26-year-old singer/songwriter was born in Drohobych, Ukraine, and now lives in Lviv. Proud of her Lemko background, she sang two evocative folk songs from that Ukrainian region, in addition to three of her own works (for which she wrote both the music and the lyrics), and a song set to a poem by Ivan Franko. Speaking later with concert-goers, Ms. Soloviy expressed her excitement at the opportunity to perform in the U.S. and graciously thanked concert organizers.

The second half of the program was highlighted by the Women’s Bandura Ensemble of North America, composed of talented musicians and singers from cities throughout the United States and Canada who perform under the artistic direction of Oksana Rodak and Oksana Zelinska. For many in the audience in Morristown, the 20-member ensemble’s performance here was their first exposure to this group founded in 2015. The WBENA’s program included the classic bandura work “Echo of the Steppes” by the renowned Hryhoriy Kytasty, Ukrainian folks songs and a Ukrainian version of Leonard Cohen’s “Hallelujah” with lyrics written by the Ukrainian Youth Association of Great Britain.

The jubilee concert’s culmination was Shumka’s “Classic Hopak,” choreographed more than 30 years ago and aptly described in the program notes as “the ultimate celebration of Ukrainian culture.” It was a rousing eight-minute dance, followed by a three-minute encore that brought the appreciative audience members to their feet.

In attendance at the concert were activists and members of the Ukrainian National Association – including the UNA General Assembly that convened its annual meeting on November 1-2 in Parsippany, community leaders, clergy and hierarchs, Ukrainian diplomats and local elected officials. Also among the audience were the generous sponsors of the concert, both individuals and organizations.

In addition to being a celebration of a remarkable UNA milestone, the concert was a benefit event whose proceeds are earmarked for the UNA Publications Endowment Fund that exists under the aegis of the Ukrainian National Foundation. The endowment fund is meant to ensure the future of the UNA’s two official publications, Svoboda and The Ukrainian Weekly, which last year marked their own significant anniversaries: the 125th of Svoboda and the 85th of The Weekly.

The concert was the fruit of the labors of the 125th Anniversary Committee that began its work back in August 2018. Committee chair Bohdana Puzyk commented: “Being asked to chair the committee to celebrate the UNA’s 125 years of service to the Ukrainian community was both an honor and a challenge. I am grateful to the members of the committee who made it happen. These members are an excellent example of the talent and professionalism that we as a ‘hromada’ [community]have. Every member was a crucial part of the whole and, as a result, the concert was an astounding success.”

Speaking after the concert, Ms. Puzyk also told The Weekly: “The Shumka dancers, a pre-eminent dance ensemble in North America, electrified the stage; the ‘bandurystky’ exemplified our true Ukrainian musical spirit; Vasyl Popadiuk is a virtuoso who has a worldwide following; and Khrystyna Soloviy is the voice that sings to our future. Each represented a part of the UNA’s history and its future.”

The concert program booklet, beautifully designed by Ms. Folk, featured a message from the UNA president/CEO, bios of the performing artists, a historic look at the UNA by the editor-in-chief of Svoboda and The Ukrainian Weekly, information about the UNA Publications Endowment Fund, as well as congratulatory greetings.