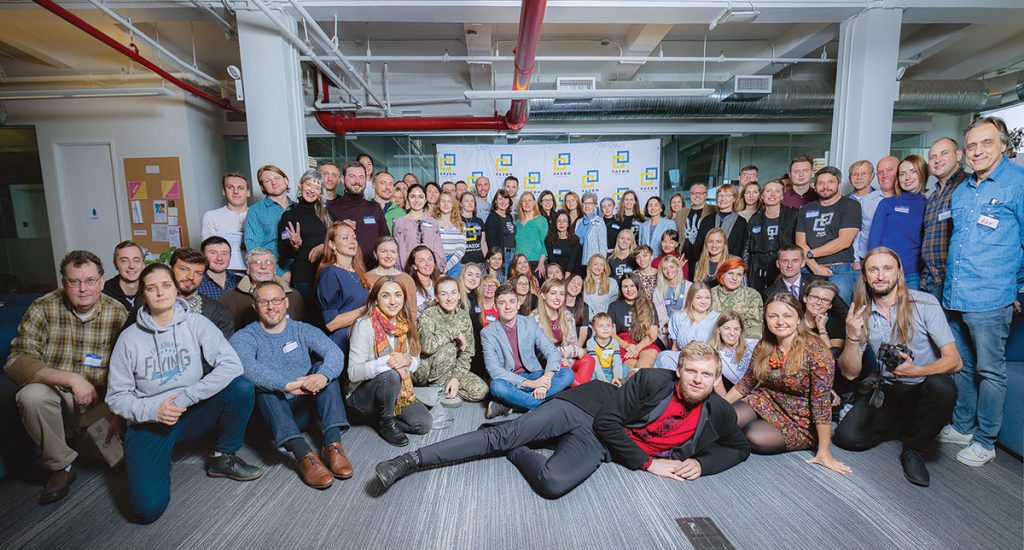 NEW YORK – During the Revolution of Dignity of 2014, millions of Ukrainians all over the world were united in seeking change in their homeland, and many volunteer groups were formed to help protesters on the Maidan. Later, some of those organizations continued their activity. Among the brightest examples is Razom for Ukraine, an organization that celebrated its five-year jubilee on October 6 in New York at its 2019 annual meeting.

Razom, which means “together” in Ukrainian, believes in the enormous potential of dedicated volunteers around the world united by the goal of unlocking the great potential of Ukraine. “Razom works toward that mission by creating spaces where people meet, partner and do,” as is stated on the organization’s official website.

Razom initiates short- and long-term projects or collaborates on projects with partner organizations – all of which aim to help Ukraine stay on the path toward democracy and prosperity.

Civic Hall in the Chelsea neighborhood of Manhattan was the venue for the annual meeting that summed up another year of Razom’s activity. Members of the movement, volunteers, partners and donors came together to learn about recent activity and meet with a variety of special guests and speakers.

The presentations were combined with networking, allowing newcomers to New York to find new friends and integrate into this community united by shared values. “Razomers” see themselves as progressive freedom-lovers who value dignity, equality and true friendship.

Razom is currently conducting or involved in some 20 different projects. It strongly supports Istorychna Pravda – a media project about Ukrainian history led by Vakhtang Kipiani; and Building Ukraine Together – a service project that develops responsible citizenship and trust among people through the format of volunteer camps that help Ukrainians affected by the current war rebuild their homes. In addition, Razom supports the Serhiy Zhadan Charitable Foundation, which supports frontline communities in Ukraine’s east; the Bohdan Hawrylyshyn Family Foundation, which is working to build a stronger democracy in a prosperous Ukraine; the Ukrainian Leadership Academy for young Ukrainians; and other projects.

Apart from those partnerships, Razom has its own projects, which were presented during the annual meeting. Natalia Bruslanova Hertel delivered a presentation about Razom Think and its most recent art exhibit that displayed paintings by Roman Sushchenko, a former political prisoner in Russia. Andriana Susak, a veteran studying at the National University of Kyiv Mohyla Academy, explained how the Bohdan Radchenko Stipend for veterans directly impacted her and fellow students. Maryna Prykhodko shared her emotions about a Partners Meeting held in Kharkiv during the summer. The Kharkiv native said she was excited about the opportunity to show Razom partners around her city and to bring these people together to discuss current and future initiatives with Razom.

Yurii Piadyk presented the Razom Ticket project by sharing his connection to STEM competitions, having grown up participating in these types of competitions in Ukraine. Uliana Bilash talked about Razom Culture, specifically focusing on her experience in organizing the Razom Lounge at the Ukrainian Festival in New York. Oleksandra Kashyrina recorded a video for the Razom annual meeting from California, whereby she shared her admiration for and involvement in the Co-Pilot Project and noted how much she has learned from neurosurgeons who volunteer their time performing brain surgeries in Ukraine. Lastly, Sasha Shulzhenko told his story of eConsul, and how this online process has simplified booking appointments with Ukrainian Consulates and renewing passports.

Each of these personal stories highly engaged the audience; after the presentation, attendees could talk with speakers directly and join the projects in various roles.

Razom Treasurer Oksana Falenchuk presented the financial report, pointing out that in the past five years Razom for Ukraine has raised $750 000 thanks to the contributions of 2,450 individual donors.

Her report was followed by a discussion on the engagement of Ukrainians abroad with the new Ukrainian government. Toward that end, a newly elected member of the Verkhovna Rada, Sviatoslav Yurash, flew in from Kyiv. Together with Dora Chomiak and Lyuba Shipovich, they talked about ways to increase diaspora cooperation with Ukrainian officials and how to get the best impact from this cooperation. As Mr. Yurash heads the parliamentary Subcommittee on Communication and Protection of Rights and Interests of Ukrainians Abroad, his participation in the discussion was appropriate.

One of the warmest moments of the day came when the audience thanked five Ukrainian veterans who attended the annual meeting. Ms. Susak, Yulia Matvienko, Yuliya Mykytenko, Olena Maksymenko, and Katia Lucyk are the creators of the Invisible Battalion project – an advocacy campaign, a sociological research group and a civil rights project for gender equality in the Armed Forces of Ukraine. Since Razom is one of the project’s partners, the veterans were invited to speak briefly about their work. The veterans’ words were followed by applause and gratitude for their service and bravery in protecting Ukraine.