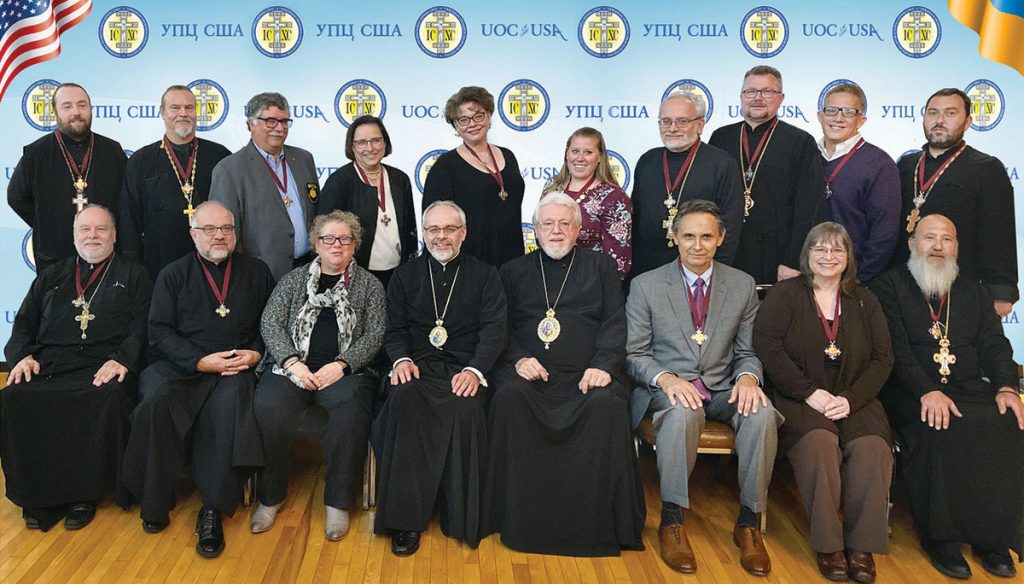 SOMERSET, N.J. – The 22nd Regular Sobor of the Ukrainian Orthodox Church of the U.S.A. was held at the Metropolia Center of the UOC-U.S.A. on October 16-19, and attracted more than 170 delegates and participants. The Sobor is the highest administrative body of the Church.

The three-day Sobor held at the Ukrainian Cultural Center mainly focused on financial matters concerning the Church and ongoing expenses related to the maintenance of properties and buildings owned by the Church.

This year’s Sobor theme was “Lord, I love the beauty of Your house and the place where Your beauty dwells.” (Psalm 26:8) Following the official opening with a Moleben service led by Metropolitan Antony and Archbishop Daniel, and the singing of the U.S. and Ukrainian national anthems, Metropolitan Antony reminded the delegates of their responsibilities during the sessions of the Sobor, underscoring that all must act under the guidance of the Holy Spirit throughout the Sobor.

Metropolitan Antony read a message of greeting from Ecumenical Patriarch Bartholomew, who offered his warm greetings and well wishes for the Sobor, as he offers continued prayers for the UOC-U.S.A., its hierarchs, clergy and faithful.

Archbishop Daniel was recognized by Metropolitan Antony for his work, not only in the U.S.A., but for the Orthodox in Ukraine as well by assisting in Patriarch Bartholomew as an exarch of the Ecumenical Patriarchate who played a key role in the granting of the Tomos of Autocephaly to Metropolitan Epifaniy and the creation of the Orthodox Church of Ukraine.

Archbishop Daniel, as president of the Consistory, delivered his remarks and report, noting that the future of the UOC-U.S.A. has been given to us (for it is not ours, but Christ’s) for “nurturing and edification.” Regarding the future, the archbishop also underscored the need to adapt to technological advancements, meeting the needs of the faithful and cultivating the next generation of leaders of the Church. The Church continues to develop and implement the Strategic Plan of the UOC-U.S.A., with a focus on spiritual renewal, educational opportunities and responsible stewardship, he said.

The majority of the Sobor discussions were focused on the financial report, presented by the Very Rev. Stephen Hutnick and Natalia Honcharenko. Metropolitan Antony reminded Sobor participants that the Metropolia Council needed to hear thoughts and concerns about the finances of the Church because the council is the body charged by the Church Constitution with stewardship decisions, including finances and property development. It is the primary goal of any discussion of finances to protect the Metropolitan Mstyslav Endowment Fund for the future, he said.

During the Sobor, funds were being collected for the Endowment Fund, and the Rev. Hutnick challenged the delegates to raise $1,000, noting that an anonymous donor would match that same amount. The bar was raised when $1,000 was reached, and it was announced another anonymous donor would match $10,000 if the Sobor was able to meet the challenge. During the course of the Sobor, the participants were able to raise more than $21,000 for the Endowment Fund.

On Friday, the Youth Sobor, organized by Natalie Kapeluck-Nixon, director of the Office of Youth and Adult Ministry, delivered its report. Although only a handful of youth participated in the fourth such Youth Sobor, their suggestions and recommendations to the Sobor, as Metropolitan Antony said, showed maturity with forward-looking ideas and thought-provoking suggestions. The youth report showed a need for a closer relationship between adults and youth, promoting love, understanding, a clear explanation of the faith with gentle encouragement from their elders. The Youth Sobor received a standing ovation for its work and Metorpolitan Antony urged the students to remain strong in their faith and devoted to God and His Holy Church.

On Friday afternoon, delegates and participants were invited to view the Rushnyky exhibit at the St. Sophia Seminary Library, as well as the new museum building that is nearing completion. Additional donations are being collected for interior finishes to the museum building.

The Sobor concluded with the election of a new Metropolia Council, Ecclesiastical Court and Audit Commission.

Following the induction and pledge by the new council members, Metropolitan Antony graced each member with a medal signifying the office and then blessed the newly elected members, along with all the delegates, with holy water. He called upon the delegates to carry the message of this Sobor home to their individual parishes and to their parish family members, and stressed the importance of the Metropolia Center in Church life and the need for the prayers of the faithful for himself and Archbishop Daniel, “for without them, it would be impossible to function,” he said.

The Sobor benediction was led with the singing of “It is Right in Truth,” to officially close the Sobor.

Delegates and participants enjoyed a final dinner together, at which Archbishop Daniel presented a poetry book written by one of the orphans in Ukraine who is supported by the UOC-U.S.A. The girl is wheelchair-bound however, her mind flies free over Ukraine and she puts her dreams, wishes and love of her homeland on paper, which the archbishop gathered and worked to compile into a book, printed by the Church in support of the orphanage. The text was typed by Victoria Zomchak, sister of Seminarian Mykola Zomchak.

Iryna Bilohan, mother of Seminarian Yaroslav Bilohan, created a number of hand-crafted teddy bears that she donated for auction, with the proceeds going toward the orphanage fund.

Following the concelebrated hierarchical divine liturgy closing the Sobor in prayer and thanksgiving, Archbishop Daniel reminded the faithful of Christ’s words, “Follow Me.” The Lord calls to each of us, he said. “The time is at hand, and we need to hear His voice, get up and follow Him.”

Participants then had an opportunity to venerate the Icon of the Mother of God of Pochaiv, which hangs above the solea in front of the Royal Doors. The icon was mechanically lowered for the faithful to venerate the icon.

A farewell brunch was held at the Ukrainian Cultural Center. With final blessings, parting hugs and kisses, exchanges of contact information, and final handshakes, delegates departed for home. Following brunch, the first meeting of the new Metropolia Council was held at the Consistory Offices.

Based on reporting by Elizabeth Symonenko, secretary of the Consistory and Metropolia Council member