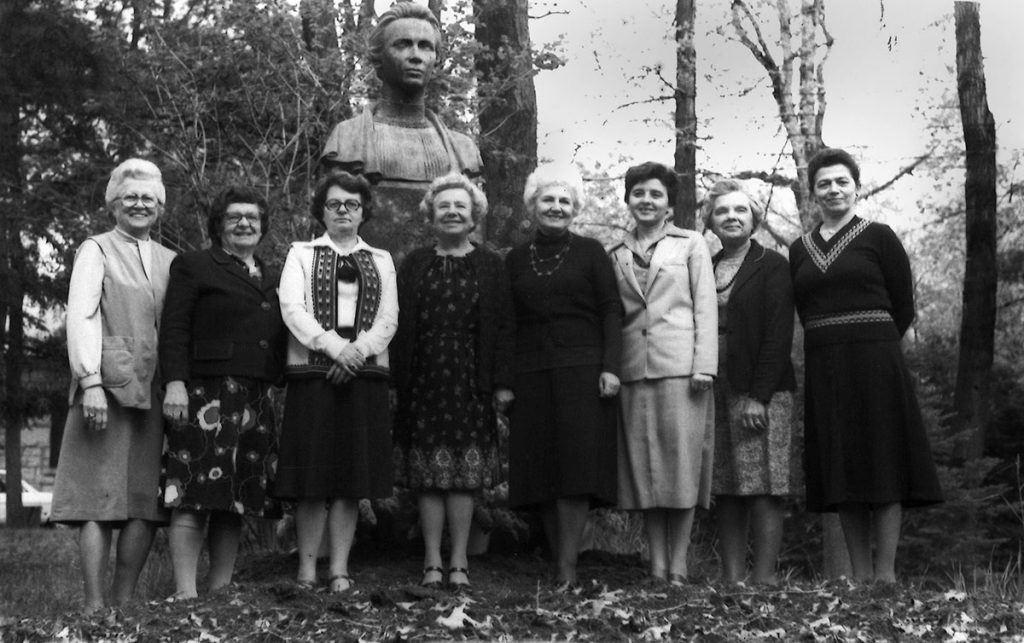 Seen on the right in 1980 are the women members of the Ukrainian National Association’s Supreme Assembly, gathered in front of the Lesia Ukrainka monument at Soyuzivka during the assembly’s annual meeting held on May 12-16. From left are: Supreme Advisor Helen Olek, Honorary Member of the Supreme Assembly Maria Chuchman, Supreme Advisor Anna Haras, Honorary Member of the Supreme Assembly Anne Chopek, Supreme Vice-Presidentess Mary Dushnyck, Supreme Treasurer Ulana Diachuk, Honorary Member of the Supreme Assembly Genevieve Zerebniak and Supreme Advisor Tekla Moroz. The General Assembly’s Women’s Affairs Committee (comprising all of the above) submitted the following resolutions and recommendations, which were approved by the assembly. Resolutions: “Whereas, it is in the interest of the UNA to foster the greater participation of the new generation in Ukrainian life and especially in the UNA, now therefore, be it resolved: 1. That the UNA sponsor the stay of two needy juvenile members between the ages of 7 and 11 at the UNA Children’s Camp at Soyuzivka this summer; and 2. That the UNA sponsor the performances of talented children on local radio stations.” Recommendations: “1. In this Decade of the Woman, we urge more UNA women to participate in UNA branch and district committee meetings and activities and to assume officers positions therein. 2. We also urge all UNA women to play a greater role in their local communities. 3. We encourage members of our local UNA district committees or branches to welcome and assist, if necessary, new Ukrainian arrivals in their communities. 4. We further urge UNA women to enroll their children, grandchildren and other members of their families as well as their friends in the UNA.”