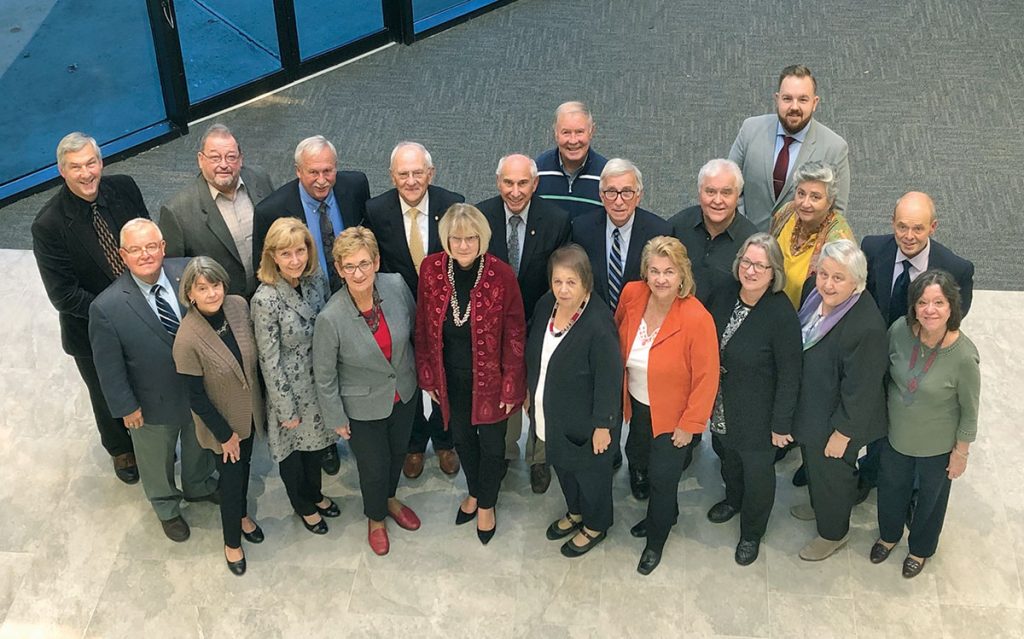 The meeting was held in Parsippany this year because the UNA’s gala 125th anniversary concert was scheduled for Saturday evening, November 2, at Dolan Performance Hall of the College of St. Elizabeth in nearby Morristown. The General Assembly sessions took place in the Home Office’s newly designed conference room.

Other General Assembly members, as well as the editor-in-chief of the UNA’s official publications, Svoboda and The Ukrainian Weekly, submitted written reports in advance of the meeting. All had an opportunity to orally add to their reports at the annual meeting.

The annual meeting began with an opening ceremony during which the Canadian, American and Ukrainian national anthems and Taras Shevchenko’s “Zapovit” (Testament) were sung, and a prayer was offered. A moment of silence was observed in honor of UNA activists who had recently passed away, among them former UNA Supreme Vice-Presidentess Gloria Paschen.

In his report, President/CEO Kaczaraj pointed to the $390,622 increase for the first six months of 2019 in the UNA’s surplus, which now stands at $11.41 million. He added that he anticipates a further increase in surplus for the entire year. The UNA’s chief executive also reported on his representation of the organization during the past year.

CFO/Treasurer Lisovich began her report by citing the broader context of developments in the life insurance industry. She underscored that the UNA has built a strong foundation for future growth and said it “continues to experience consecutive years of solid net profits.” Moreover, she said the UNA’s assets are projected to grow to $182 million by the end of 2020.

COO/National Secretary Symczyk analyzed UNA insurance sales for the first nine months of 2019 and noted that 2020 has a lot of potential for increased sales. In the works are agent recruitment processes and a new marketing plan. He also spoke about the merger of some UNA branches and the establishment of a new branch, No. 501, in the Philadelphia District, as well as a potential new branch in the Whippany, N.J., area.

Advisor Puzyk, who chairs the special committee established to plan celebrations of the UNA’s 125th, reported the good news that tickets to the gala concert scheduled for the next day were sold out, and that $30,000 had been raised from sponsors. She said there is great support from the community for this jubilee concert and assured all that “this will be an event to remember and enjoy.” Ms. Puzyk expressed special appreciation to Nadiya Folk, executive assistant at the UNA Home Office, for her design of all materials related to the 125th anniversary: the anniversary logo, advertisements for jubilee events and the concert program book.

Next came a report and discussion about the UNA’s official publications, the newspapers Svoboda and The Ukrainian Weekly. Ms. Lisovich reported on the UNA Publications Endowment Fund that exists within the Ukrainian National Foundation, adding that donations to the fund now total $29,100, which includes $12,500 from the UNA.

The CFO also spoke of the high cost of producing both newspapers and reported on cost-containment measures that had been implemented. At the same time, it was pointed out by Ms. Lisovich that the newspapers are “our main advertising vehicle,” and by Mr. Szul that they are also “our primary corporate communications vehicle.”

There was a discussion on how to increase the number of subscribers and whether to give UNA members a free online subscription to their choice of one of the UNA’s newspapers.

The Publications Committee is composed of: Mss. Jarosewich (chair), Hadzewycz, Puzyk and Czerkas, and Messrs. Pishko and Serba.

General Assembly members discussed the date of the next annual meeting, agreeing that it should be in October 2020 at Soyuzivka Heritage Center in Kerhonkson, N.Y.

The five-member Standing Committee on UNA By-Laws – whose members are Messrs. Tysiak (chair), Serba (who participated via teleconference), Osidacz and Skyba, and Ms. Walchuk – and the Working Group on UNA By-Laws – composed of Mr. Szul (chair, who was not present that day), Mr. Symczyk and Mss. Lisovich, Koziak and Hadzewycz – held a joint meeting on Saturday afternoon, November 2, immediately after the General Assembly meeting was adjourned.

The two groups, which now form the Joint Committee on UNA By-Laws, are to meet again on Monday, November 18, to iron out further details regarding the proposed new by-laws of the association.