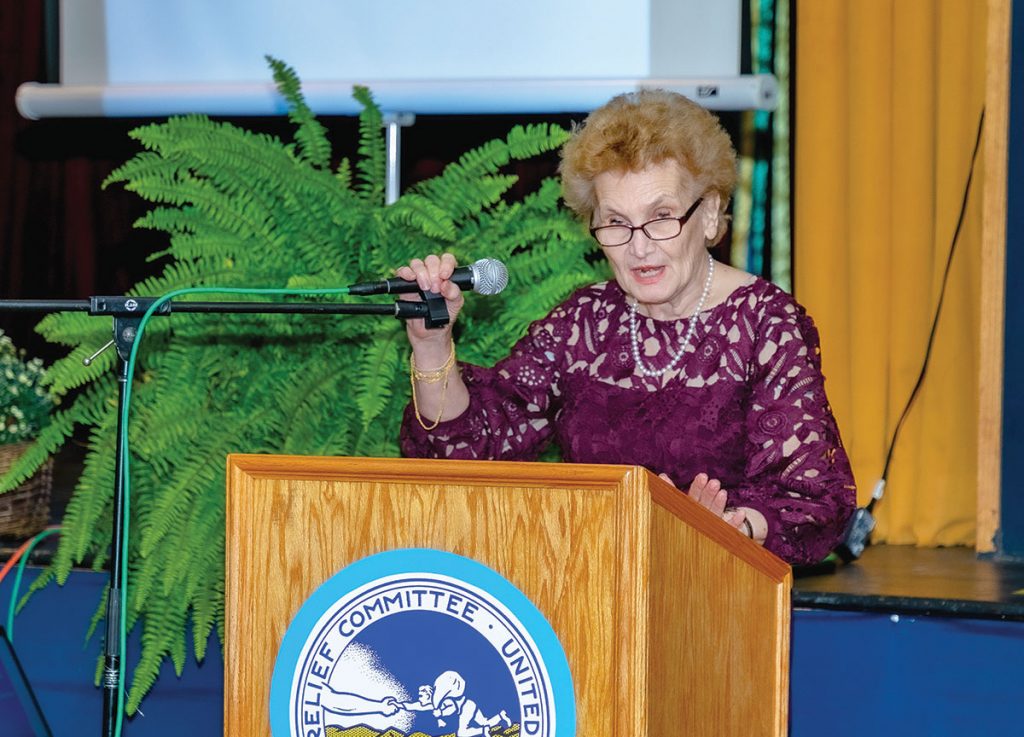 During the uncertain post-war years, the UUARC made it possible for tens of thousands of Ukrainian refugees to resettle in displaced persons’ camps in Germany and Austria, and eventually reach America. Many of them were well-educated and leaders of their communities. Many others were young but unafraid of the Soviet regime and committed to Ukrainian independence. Because of the UUARC, they were given an opportunity to live in a country that allowed them to achieve their potential but never forget their ancestral roots.

Today, the UUARC still continues to help Ukrainian immigrants throughout the world.

Few organizations in the United States can boast of such a long history of consistent humanitarian aid to Ukrainians in need as the UUARC. For 75 years, the UUARC has been fulfilling the mission entrusted to it in 1944 by the second congress of the Ukrainian Congress Committee of America (UCCA). In the beginning, its main goal was to help Ukrainian war victims in Ukraine and those who emigrated. Its motto became “Brother-to-Brother.”

As immigration slowed, the UUARC began to respond to new needs of Ukrainians everywhere. Probably no other organization in the diaspora has helped so many people in need or has been in the forefront responding to natural disasters, such as floods or mine accidents. Many will forever be grateful to the UUARC for sponsoring them to America and giving them a chance at a new life.

We can partially attribute the success of the UUARC to its volunteers who freely give up their time to help pack medical equipment, clothing and other necessities. It should be emphasized that members of the UUARC’s Executive Board and Board of Directors also work on a voluntary basis, making it possible for all donations to be targeted for aid and humanitarian projects.

On October 12, the UUARC celebrated its 75th Jubilee by hosting a cocktail buffet reception at the Ukrainian Educational and Cultural Center in Jenkintown, Pa. Many Ukrainian organizations’ representatives were among the 200 people in attendance. The Ukrainian National Association (UNA), which is celebrating its 125th anniversary, was represented by President/CEO Stefan Kaczaraj. Also present were hierarchs of the Ukrainian Catholic and Ukrainian Orthodox Churches, clergy and religious.

As the guests entered, they enjoyed a performance by the trio Strings by the Sea, led by Vera Bojko on violin, Mark Stepper on viola and Anthony Pirollo on cello. The very capable masters of ceremonies for the evening were Motrja Bojko Watters and Ihor Kusznir.

The formal program began with the invocation by Metropolitan Antony of the Ukrainian Orthodox Church of the U.S.A. Unfortunately, Metropolitan-Archbishop Borys Gudziak was unable to attend due to illness. Next, Oleksii Holubov, consul general of Ukraine in New York, offered a few remarks. He expressed his and Ukraine’s deepest appreciation for the work of the UUARC on behalf of the soldiers fighting for Ukraine’s freedom as well as their families, and presented UUARC and its president, Dr. Larissa Lozynskyj Kyj, an award recognizing their distinguished achievements.

Dr. Kyj gve a very interesting PowerPoint overview of the UUARC’s history. She spoke of the many programs the organization developed in the 75 years of its existence, including the following: “From childhood to Taras,” “Know your Native Land,” “Summer camps for children in need and orphans,” “Easter Basket,” “Christmas Joy,” “Adopt-a-Grandparent,” “Soup Kitchens,” “Family-to-Family” and “Adopt a Wounded Ukrainian Soldier.” These programs continue to help countless soldiers, children, the elderly and the needy.

At the conclusion of her presentation, the co-chairs of the jubilee celebration, Chrystia Charyna Senyk and Myroslawa Mazurok Hill, presented Dr. Kyj with an award from the Executive Board for her dedication and hard work as president for the past 23 years.

The audience was enchanted by the performance of pianists Anna and Dmytro Shelest. They performed the overture to the opera “Taras Bulba” by Mykola Lysenko, folk melodies and dances by Serhiy Bortkevych, a medley of Ukrainian songs for solo and four-hands piano and “Rhapsody in Blue” by George Gershwin. The artists were rewarded with enthusiastic applause.

The Rev. Stepan Sus, head of the Military Chaplaincy Center and rector of the Ukrainian Catholic Church of the Holy Apostles Peter and Paul in Lviv, expressed gratitude to the UUARC from the veterans and soldiers still fighting in the east, noting that this aid with medical equipment and monetary assistance has been immeasurable.

Vira Prinko, head of the UUARC Bureau in Kyiv, and Dr. Andriy Dyda from the UUARC Bureau in Lviv, joined in congratulating the UUARC on its jubilee. Briefly, they explained how they carry out its programs in Ukraine, ensuring that the aid goes to those truly in need. Ms. Prinko also presented the UUARC with an award from the General Staff of the Armed Forces of Ukraine.

Osip Roshka, who is completing a history of the UUARC titled “Harmonious Chords of Warmth,” shared some interesting facts about the organization that he found in various archives. The book, once finished, will be given to all who attended the anniversary festivities.

The audience was delighted by the performance of Philadelphia’s own Prome­theus Ukrainian Male Chorus under the direction of Roman Kucharskyy, with piano accompaniment by Irena Pelech Zwarych.

The celebration was concluded with a benediction by Bishop Andriy Rabiy, auxiliary bishop of Philadelphia, a rousing rendition of “Mnohaya Lita” and the prayer for Ukraine “Bozhe Velykyi” performed by Prometheus.

In 75 years, much has been done to help Ukrainians in Ukraine and throughout the world; much still needs to be done. There are casualties of the war in Ukraine’s east, forcibly relocated refugees, orphans, the elderly, children with special needs and the poor, who all need assistance and support. The message of the evening was: the UUARC has always depended on the generosity of its volunteers and donors, who are key to the UUARC’s endeavors.