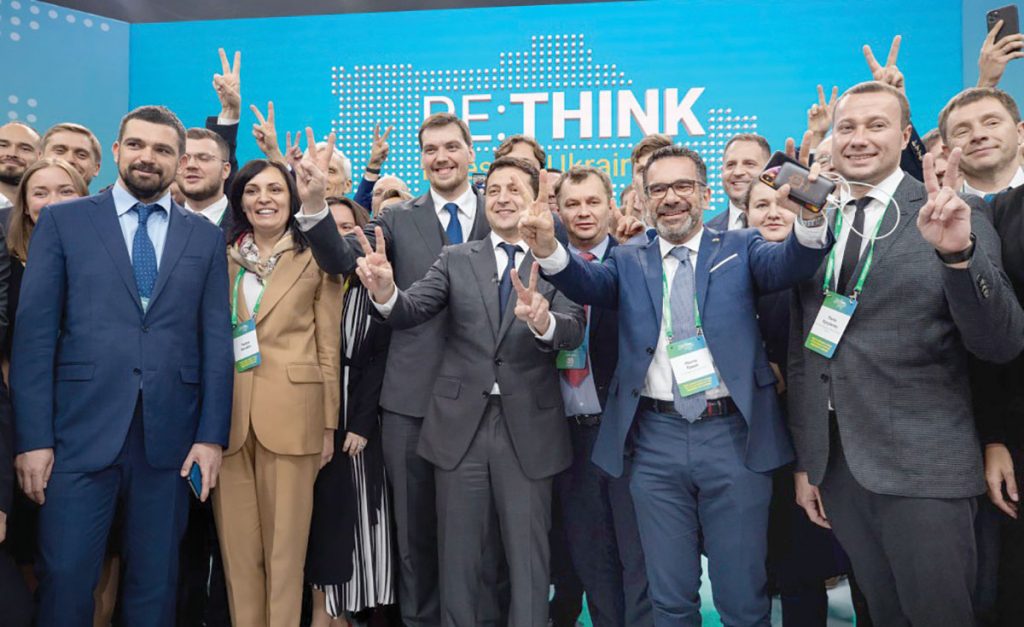 Presidential Office of Ukraine
President Volodymyr Zelenskyy and participants of the “THINK. Invest in Ukraine Forum” in Mariupol.

KYIV – During the last two weeks in Ukraine, worrying headline-making developments connected with the disengagement of military forces in the Donbas were overtaken by others focused on the wartorn southeast of the country and economic and security prospects. They saw, among other events, a major public relations and promotional exercise by the Ukrainian government in Mariupol designed to build confidence in Ukraine and attract foreign investors and donors, and the visit to the country by NATO’s secretary general and a delegation of alliance members.

Initially, a new scandal broke out involving a videofilmed altercation on October 26 between President Volodymyr Zelenskyy and a representative of Ukrainian irregulars on the Donbas frontline in Zolote who are opposed to the disengagement of forces that has been agreed to within the Minsk peace-making process. There was a blunt exchange between the two, with the Ukrainian leader using very direct language while attempting to put his equally forthright interlocutor in his place.

The president and his representatives stressed that armed volunteers, however patriotic their intentions, should not be interfering with the delicate work of the armed forces and should also show proper respect for the country’s democratically elected leadership and its commander-in-chief. Opponents of Mr. Zelenskyy countered that he had shown contempt towards proven defenders of Ukraine. Within a few days, with both sides having apparently exhausted the issue politically, the withdrawal of Ukrainian forces in Zolote proceeded according to plan. But problems elsewhere along the control line have persisted.

On October 29 most of the attention shifted to Mariupol, where the Ukrainian government hosted the “THINK. Invest in Ukraine Forum.” It was addressed by President Zelenskyy and Prime Minister Oleksiy Honcharuk and attracted a host of high-level representatives from the business world and Ukraine’s partners. Mr. Zelenskyy depicted it as the beginning of a new investment stage in the history of the Ukrainian state.

He announced the presentation of an “investment menu” – a series of landmark projects. “The state will provide their full support at the level of the president and the prime minister, protect against corruption and provide PR at the state level,” Mr. Zelenskyy said. “My goal is to make Ukraine appear in the world textbooks alongside the cases of Japan, South Korea and Singapore,” he emphasized.

The president pointed out that Ukraine was becoming a stable and predictable market with significant business opportunities. He stressed that it has favorable climatic conditions, a favorable geographical location inexhaustible agricultural and industrial potential, and that Ukrainians are hard-working and talented. “All this is our answer to the question: Why should you invest in Ukraine?” he said.

President Zelenskyy called on international partners to invest in development of towns and villages. The funds will be spent on new schools and hospitals. “Our idea is to start the development from Mariupol. That is why the investment forum is taking place here, in eastern Ukraine. A city once liberated can become truly European,” he underscored.

Before the event, the president participated in the opening of a vastly improved road link to the southeastern city that was accomplished in record time. Andy Hunder, the president of the American Chamber of Commerce in Ukraine, told The Ukrainian Weekly: “The brand-new Zaporizhzhia to Mariupol 225-kilometer-long road is the smoothest stretch of pothole-free tarmac that I have seen in Ukraine. Not a Potemkin-road, but a benchmark standard for the future construction of the new highways in Ukraine.”

Both Prime Minister Honcharuk and President Zelenskyy acknowledged that, in view of the challenges that face the country and to make up for lost time, they were trying to effect changes as quickly as possible, in a “turbo regime.” They recognized that this meant that mistakes might be made, but said they could be rectified afterwards; and they pleaded for understanding that there could be no excuse for delaying.

Mr. Honcharuk also openly acknowledged that, without a properly functioning, credible, legal system, progress would be blocked and investors deterred. That is why, he said, the Verkhovna Rada had just voted to renew legal reform efforts, and while the haste might not be to the liking of all, it was a necessary response to the requirements of the time.

According to Mr. Hunder, “President Zelenskyy and his team delivered a clear and concise message in Mariupol – they are committed to their people in eastern Ukraine: the government clearly showed that it will support and showcase the opportunities for business to invest in eastern Ukraine, to boost the economy and create jobs.”

Jim Brooke, the editor of Ukraine Business News, reported on October 31: “The Mariupol investment forum was a festival of IFIs – the international financial institutions. The alphabet soup featured EBRD, EIB, IFC and World Bank. The main exception was a delegation of 20 French companies, drawn partly by the people skills of Mariupol’s 42-year-old francophone mayor, Vadym Boichenko, an INSEAD [the French-based European Institute of Business Administration]graduate. As pioneers, the IFIs are financing the infrastructure – notably roads and railroads – to open the area to foreign investment.”

Alluding to Mariupol’s proximity to the front line in the Donbas and concern about the safety of doing business in the war-affected region, Mr. Brooke also noted that, “While a peace accord seems far away with Russia-armed separatists, it is worth remembering South Korea has boomed for almost 70 years without a peace treaty with its belligerent, Russia-armed neighbor.

Another participant, who was responsible for managing the interaction between the official speakers and the guests, told The Ukrainian Weekly on condition of anonymity that the event had indeed been a success. Holding such an important event with high-caliber foreign participants in Mariupol was in itself a bold and impressive achievement, though the tone from the government was perhaps “a bit too upbeat.”

His impression was that, while certain doubts are beginning to creep in, for the moment the Zelenskyy administration and its vision of the way forward is still “for the time being given the benefit of the doubt.” The overall impression, he added was one of “cautious optimism” among the business community and Ukraine’s partners.

This mood was also demonstrated by two other developments, both related to the energy sector. On November 2, a huge new solar power station began operating in Katerynivka, in the Dnipro region. The 440-megawatt station named Pokrovska gas was built by DTEK, which is owned by oligarch Rinat Akhmetov, and is the second largest in Europe.

Also this week, a major exposition for investors in Kyiv focusing on all aspects of the energy sphere attracted more than 100 companies, mostly from East Asia and Europe, including 19 from Taiwan and 12 from Korea.

Not surprisingly, the issue of security was a recurring theme at the Mariupol forum. According to Mr. Hunder, “Zelenskyy in Mariupol spoke passionately about ending the war and bringing peace to the region. The next months will be vital to prove whether the road to ending the war will be as smooth and as quickly constructed as the new road to Mariupol was. This will be a key factor to bring in investment to eastern Ukraine.”

Security issues were also highlighted by a visit to Ukraine of NATO Secretary General Stoltenberg and representatives of all the members of the alliance. On October 31 they familiarized themselves with Ukraine’s naval defenses in Odesa, and the following day a meeting of the NATO-Ukraine Commission was held in Kyiv. During this latest display of support from NATO, Ukraine’s representatives reaffirmed the country’s firm desire to join the alliance.

At a joint press conference, President Zelenskyy said “Ukraine is ready to boost the pace of preparations for joining NATO.”

NATO’s secretary general reaffirmed that the alliance will continue to stand by Ukraine and urged its leadership to carry out all the necessary reforms expected of an aspiring candidate for membership.

A few days later, Kyiv also re-emphasized that Ukraine seeks to join the European Union. On November 5, while addressing a ministerial conference in Stockholm making the 10th anniversary of the EU’s Eastern Partnership initiative, Ukraine’s Minister of Foreign Affairs Vadym Prystaiko said that Ukraine would like to deepen differentiation and sectoral integration. For this purpose, it is interested in revising and modernizing its Association Agreement with the EU and the terms of the Deep and Comprehensive Trade Agreement.

Meanwhile, on October 28, the EU, Russia and Ukraine concluded the fourth round of trilateral talks at the political level on the long-term transit of Russian gas via Ukraine to Europe as of next year without reaching an agreement.

The situation was further complicated on October 30 when Denmark granted Russia’s state-controlled energy company, Gazprom, permission to build a controversial gas export pipeline through Danish waters. That removed the last major regulatory hurdle for Gazprom to complete its 1,230-kilometer Nord Stream 2 pipeline along the Baltic Sea floor from Russia to Germany that will circumvent Ukraine and hurt its economy.

And finally, the completion of the disengagement of military forces on the control line, which has been set as precondition for a new summit of the Normandy Four leaders, has run into a further snag – the latest problem being the failure to achieve a ceasefire in Petrivske. The Zelenskyy administration is under strong pressure at home not to give in to the Kremlin’s pressure, while France and Germany are encouraging Kyiv to be “conciliatory” towards Russia. However, the Kremlin is clearly not interested in such a meeting. It has failed to rein in its proxies in the Donbas and to stop their shelling of Ukrainian positions.

On November 1, Foreign Affairs Minister Prystaiko declared that Ukraine, France and Germany were ready for a Normandy Four summit, but that Russia does not want progress on this issue. Four days later, Kremlin spokesman Dmitry Peskov attempted to shift the blame onto Ukraine. “It is premature to talk about holding a meeting of the Normandy Four leaders by the end of the year,” he said.