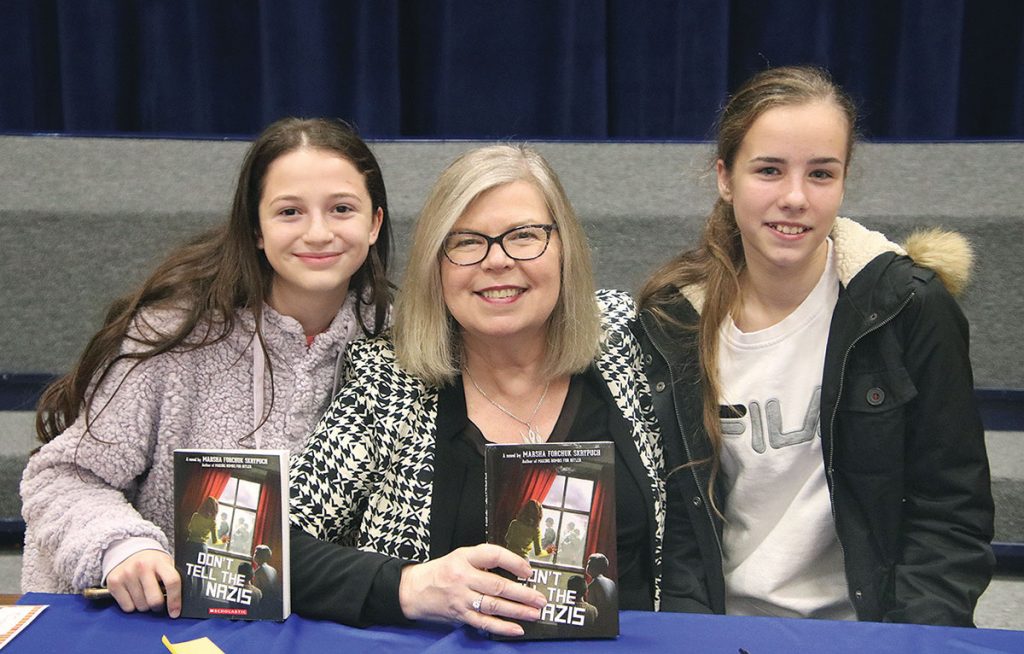 Staff | The Ukrainian Weekly | Subscription
The author with eighth graders Iryna and Christina.

CHICAGO – The voice message was from a Canadian woman, an author of many books on Ukrainian themes. She was going to be in the area in the fall and wanted to do an event for the Chicago Ukrainian young people.

I called her back and the story unfolded. This author didn’t speak Ukrainian, she had the improbable name of Marsha, yet she had written more than 20 bestselling books and half of them were on Ukrainian historical themes. Her name was Marsha Forchuk Skrypuch. Partway through that first conversation, I realized that I had been using one of her books for Holodomor education. That book is “Dosyt” – “Enough” in English.

Imagine a picture book set during the Holodomor. A darkly humorous tale in the tradition of a Grimm fable about Marusia and her father and how they trick the dictator by burying their wheat in graves. It’s a great vehicle to educate primary students about the Holodomor without frightening them.

Ms. Skrypuch told me that “Enough” nearly got her killed – when it came out in 2000, the house where people thought she lived was defaced with swastikas and that she got death threats by phone and by mail. Yet she kept on writing about Ukrainian history. That book also brought her a great honor. President Viktor Yushchenko of Ukraine awarded her the Order of Princess Olha upon his visit to Canada in 2008.

But that’s not why she was wanting to connect with me. Recently, her World War II novels had struck a chord in the United States. Scholastic Book Fairs was promoting them, offering inexpensive paperback editions of her novels, and kids were thoroughly enjoying them. The first came out in the U.S. in 2017 and was a surprise hit, reaching No. 1 in sales for the book fairs. That book, about a Ukrainian girl captured and forced to make munitions for the Nazis, is called “Making Bombs for Hitler.”

The second in the trilogy, called “The War Below” (2018), is about Luka, a young teen who joins the Ukrainian Insurgent Army and fights both the Nazis and the Soviets.

It was with the publication of the third title in the trilogy that Scholastic Book Fairs asked to tour her.

She had been on a whirlwind tour last spring with that season’s novel, called “Stolen Girl,” visiting schools in Detroit, Chicago and Kentucky. That novel was inspired by her Ukrainian mother-in-law’s childhood during World War II, about the Lebensborn program, whereby Aryan-looking Ukrainian and Polish children were kidnapped and brainwashed into thinking they were German. Lidia Skrypuch had lost half of her classmates to that program.

“Here I was in Chicago and Detroit,” Ms. Skrypuch said to me during that phone call, “speaking about Ukrainian history in cities with a huge Ukrainian diaspora, yet Ukrainian Americans were not aware of who I am.”

When she visited St. Nicholas Cathedral School this October, many of our students actually did know who she was. They’d bought her books over the past couple of years at the Scholastic Book Fairs. Although the adults were not familiar with the author, her presentation elicited much interest from the audience. Her books make good reading for all ages.

The book she is currently touring with is called “Don’t Tell the Nazis” and it’s the first novel of her newest World War II trilogy. This novel is based on the true story of Krystia Korpan, née Sikorska, a Ukrainian girl who hid three Jewish friends under her kitchen floor during the Nazi occupation of her town.

It was documentary journalist Iryna Korpan who approached Ms. Skrypuch and asked her to write about her mother and grandmother’s heroism, and after meeting Krystia Korpan in person, Ms. Skrypuch agreed.

“I didn’t think I’d ever write another World War II novel,” said Ms. Skrypuch. “It takes a lot out of me emotionally, but after meeting Krystia face to face and hearing her story, I realized I had a moral responsibility to write it.” Readers and reviewers are glad that she did.

Ms. Skrypuch’s books are available in bookstores and online, as well as through Scholastic Book Fairs. Her trilogy – “Making Bombs for Hitler,” “The War Below” and “Stolen Girl” – is available in hardcover in stores or in paperback through the book fairs.

“Don’t Tell the Nazis” will be published in hard cover for stores and will be available in early December, but it has already been offered in paperback for students through the book fairs this fall.

Ms. Skrypuch is the author of more than 20 books for young people. In addition to World War II and the Holodo­mor, she has also written about the Canadian internment of Ukraini­ans during World War I. She has also written extensively on Viet­namese refugees and the Armenian Genocide. Her website is www.calla.com.