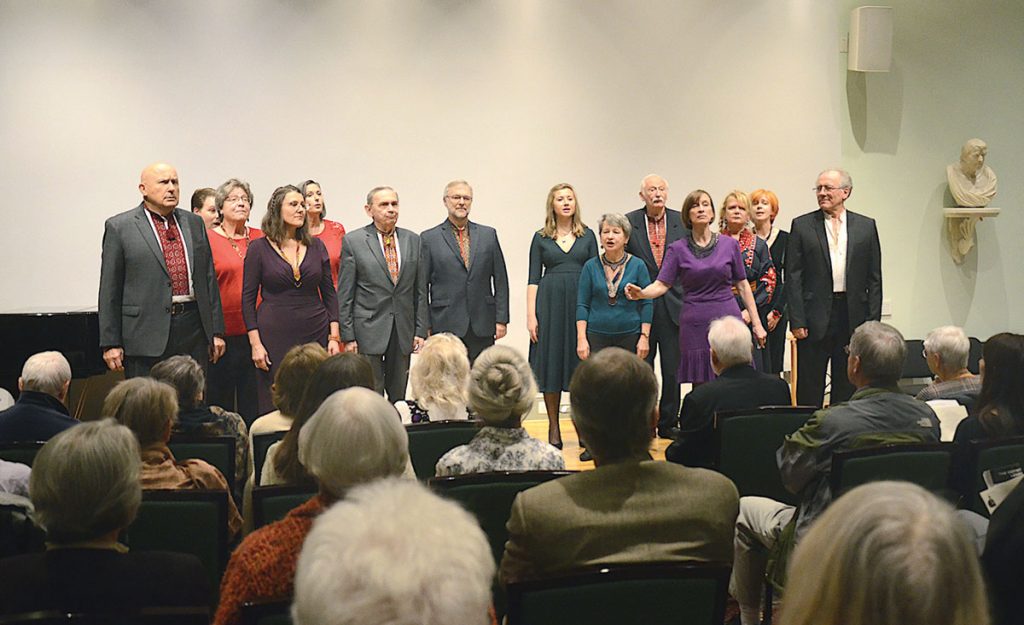 Yaro Bihun
The a cappella group Spiv-Zhyttya performs at the Lyseum.

ALEXANDRIA, Va. – On November 10 at the historic Lyceum, now a museum in Old Towne, Alexandria, Va., The Washington Group Cultural Fund presented a concert featuring a number of Ukrainian artists living in the Washington area.

Co-director of the Cultural Fund Christine Lucyk welcomed a capacity audience in the performance hall. In introducing Spiv-Zhyttya, she pointed out that a cappella singing is a Ukrainian tradition spanning over two centuries. Consisting of 14 singers ably led by Oksana Lassowsky, the group began informal singing in 2011. It has become much in demand in the Mid-Atlantic states and often sings at the Embassy of Ukraine.

Its program consisted of traditional Ukrainian folk songs, as well as several songs in memory of Nadia Diuk, one of the group’s original singers and a longtime supporter of the Cultural Fund. These included two hauntingly beautiful pieces – Roman Hurko’s “Ave Maria” and Myroslav Skoryk and Bohdan Stelmach’s “Candle of Remembrance,” arranged by Victor Morozov.

One of the group’s singers, Larisa Pastuchiv-Martin, played several Ukrainian songs on the bandura, including her own composition “Fantasy on Ukrainian Melodies,” and “Remembrance,” written by her father, the Rt. Rev. Serhij Pastukhiv, in memory of the Holodomor.

Another member of Spiv-Zhyttya, Mr. Morozov, one of the founders and the artistic director of Ne Zhurys, a cabaret-style musical group in Lviv that specialized in political satire, played the guitar and engaged the audience with his humorous Lviv “batyar” (cool dude) songs.

The audience rewarded the artists with a rousing round of applause and everyone agreed that there is a lot of Ukrainian talent in the Washington area. The next concert of TWGCF on March 15 will feature Nazar Pylatyuk, a young violinist from Lviv.