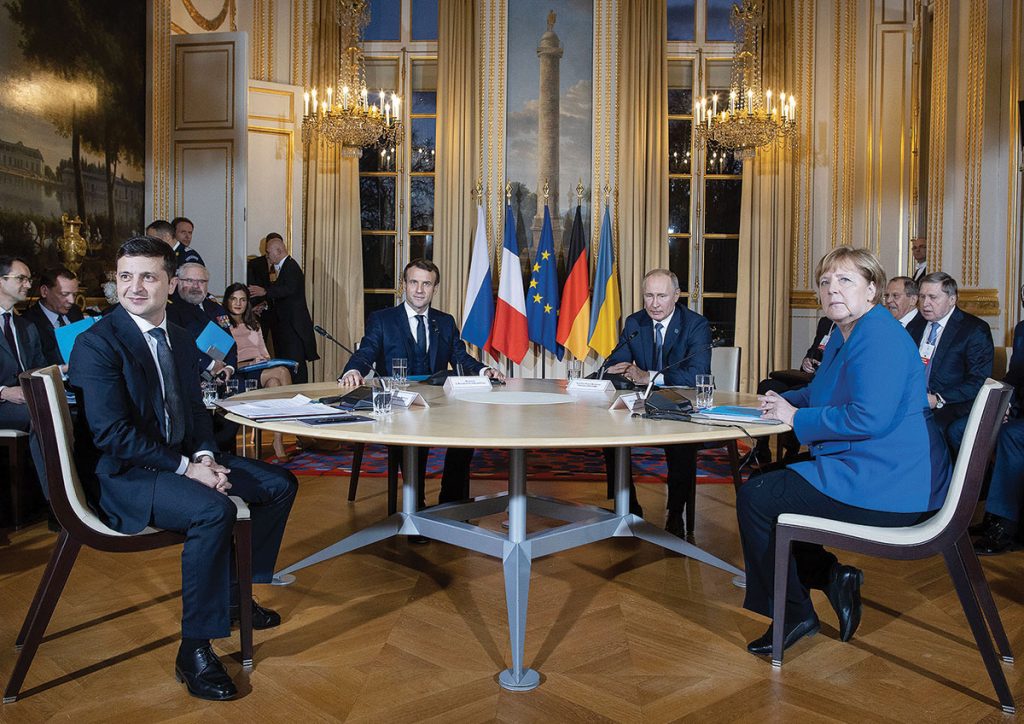 KYIV – The results of the Normandy format summit that brought together the leaders of Ukraine, Russia, France and Germany on December 9 – for the first time in over three years – have been greeted with cautious optimism for having reactivated the stalled negotiations based on the Minsk accords of 2014-2015 to end Russia’s war in the Donbas.

Without giving way on fundamental issues, Ukraine’s President Volodymyr Zelenskyy managed to secure agreement on an exchange of all prisoners, a commitment to a general ceasefire and a follow-up meeting within four months. However, many political issues related to the future of eastern Ukrainian regions now controlled by joint Russian-separatist forces remained unresolved.

The nervously awaited summit that took place in Paris was preceded by much speculation and concern in Ukraine and beyond about what it might produce, and mass rallies throughout Ukraine warned against “capitulation” to Russia.

Once the meeting of the Normandy four had concluded, the organizers of protests in Kyiv acknowledged that President Zelenskyy had not crossed any “red lines” and terminated their vigil outside his headquarters.

Preparations for the summit had been under way since September, after the exchange of political prisoners between Kyiv and Moscow had generated hopes that the new Ukrainian president and Russia’s President Vladimir Putin could kick-start the moribund Minsk and Normandy format processes. With the Ukrainian leader affirming that he wanted peace, but not at any price, and that he would not yield on fundamental issues, namely Ukraine’s independence and territorial integrity, the Kremlin’s interest in holding such a dialogue appeared to evaporate and Moscow set preconditions that would be difficult for Mr. Zelenskyy to accept.

But after Kyiv agreed to accept the controversial “Steinmeier formula” as the basis for further discussion at the summit and to a disengagement of military forces in three pilot spots along the frontline in the Donbas, it became increasingly difficult for Moscow to keep postponing the talks. France’s President Emmanuel Macron, who has recently moved closer to Mr. Putin, was eager to host a summit of the Normandy four in his capital, and most commentators believed he would encourage the Ukrainian leader to accept compromises.

Once a date had been set for the summit, Mr. Zelenskyy’s political opponents, particularly the supporters of former President Petro Poroshenko, launched a campaign accusing the Ukrainian leader of preparing to “capitulate” before Russia. Although Mr. Zelenskyy strenuously dismissed these accusations and elaborated the principles he would not abandon, the president’s opponents kept up the pressure. On December 3, three factions in the Verkhovna Rada – Mr. Poroshenko’s European Solidarity, Yulia Tymoshenko’s Batkivsh­chyna and Svyatoslav Vakarchuk’s Voice – issued a joint declaration listing the red lines that the Ukrainian president should not cross.

On December 6, the eve of his departure for Paris, President Zelenskyy visited the frontline. There, and later in a TV appearance on the “Savik Shuster Show,” he gave further assurances that he was well aware of what the red lines were and that he had no intention of crossing them. Afterwards, on the same show, former President Leonid Kravchuk asked the organizers of the forthcoming protests how they could still justify their actions which, in his opinion, were dividing and not uniting the country at such an important moment.

On December 8, several thousand people took part in a rally on the Maidan in Kyiv, which was addressed by Mr. Poroshenko. Similar meetings were held in several other cities. In the evening, many of the demonstrators in Kyiv began a vigil outside the presidential building. Their action was peaceful, even when they were prevented by the police from erecting a stage.

Right until the day of the summit itself, leaders in Kyiv continued to convey that it had only modest expectations and would hold the line.

“We are going there, first of all, for the sake of our prisoners held in Russian prisons and for the sake of our citizens in the occupied territories. Our main red line, from which we will not retreat even a millimeter, is the internationally recognized state border of Ukraine,” Minister of Foreign Affairs Vadym Prystaiko wrote on Twitter.

President Zelenskyy himself named three issues he intended to discuss at the summit: a prisoner swap, a ceasefire, and the conditions under which local elections in the Donbas could be envisaged.

The Ukrainian delegation to the talks was quite large. The advisors included Head of the Security Service of Ukraine Ivan Bakanov, Internal Affairs Minister Arsen Avakov and Chief of the General Staff Ruslan Khomchak, as well as Minister of Energy and Environmental Protection Oleksiy Orzhel and Executive Director of Naftogaz Yuriy Vitrenko.

The summit was held in the Elysee Palace. President Zelenskyy was welcomed by his host and then had a bilateral meeting with President Macron, followed by one with German Chancellor Angela Merkel. All four leaders then sat around the negotiating table – the first time that the Ukrainian and Russian presidents had met. Photographers did not see any handshakes between them, either then or later.

This “plenary” session was eventually adjourned to allow the Ukrainian and Russian leaders to hold bilateral talks. Mr. Zelenskyy later revealed that these were not “one on one,” but in the company of representatives of both delegations. According to the Russian newspaper Kommersant the talks were interrupted while in full swing by President Macron who summoned them for dinner.

Finally, around midnight, the four leaders held a joint press conference and their communiqué was issued. All four appeared tired, particularly Mr. Putin, who seemed rather subdued. Surprisingly, he did not forcefully challenge explicit statements made by the Ukrainian leader about the red lines for Kyiv, even when the latter stressed that “Crimea and the Donbas are Ukraine,” that federalization of Ukraine and direct talks with Moscow proxies in the occupied areas of the Donbas are out of the question.

In contrast, an exhausted Mr. Zelenskyy seemed upbeat and confident. From his answers, expressions and even body language, it was evident that he was pleased with the tough baptism of diplomatic fire he had undergone.

Mr. Zelenskyy managed to achieve more than he had hoped for – agreement on a prisoner swap of “all for all” and the establishment of a general ceasefire, both by the end of the year, and a follow-up meeting of the Normandy four within four months.

Moreover, in the presence of President Putin himself, and two key European leaders, he was able to explain clearly and unambiguously to the international community what Ukraine’s position and expectations are.

The contents of the communiqué, which had been largely prepared in advance, noted that the Normandy Four leaders had agreed on: “Immediate measures to stabilize the situation in the conflict area,” and “Measures to implement the political provisions of the Minsk agreements.” As expected, there were was no mention in it of other important issues, namely Crimea and gas flows from Russia, as both fell outside the scope of the summit.

Among the details that will need to be addressed before the next summit are: if and how the Steinmeier formula can be applied, when local elections can be held in occupied areas of the Donbas and what form of local-self-government will be given to them.

The results of the summit have so far received a mixed reception at home, though overall they are regarded as better than expected or feared. (See analysis on page 3 of this issue.)

Within the international community, the results have been welcomed as significant steps forward.

“The new dynamics in the Normandy format talks represent a window of opportunity that should be used by the sides to move towards the full implementation of the Minsk agreements,” the spokesperson of the EU High Representative for Foreign Affairs and Security Policy, Peter Stano, commented on December 10.

U.N. Secretary General Antonio Guterres on December 10 expressed “strong support” for the Normandy four efforts towards a Donbas settlement. Through a spokesperson, he called on all concerned to “redouble their efforts to build on recent progress towards a resolution of the conflict” and reiterated his “full support for the independence, sovereignty and territorial integrity of Ukraine within its internationally recognized borders.”