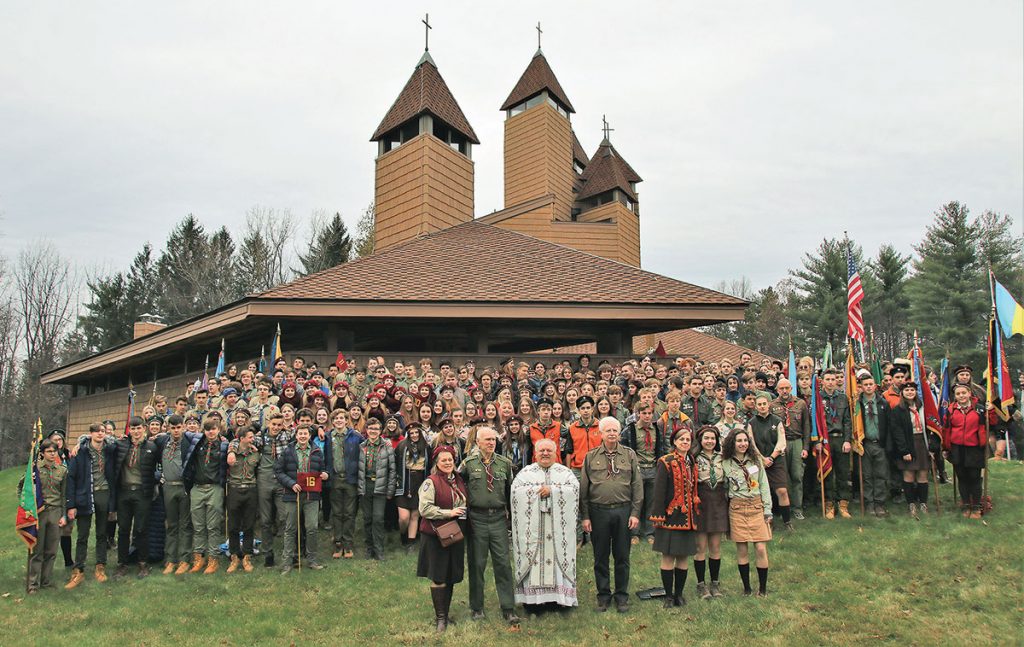 Roman Shyprykevych
Group picture of the participants of the 57th Orlykiada.

KERHONKSON, N.Y. – “Ready, set, go!” With this call to attention, the 57th Orlykiada competition began. Year after year, this competition for scouts age 11-18 of Plast Ukrainian Scouting Organization takes place at Soyuzivka Heritage Center. On November 10-11, 160 participants from all over the United States and Canada competed in the 2019 event. There were 17 teams from 10 different cities including: Detroit, Yonkers (N.Y.), Chicago, Cleveland, Newark (N.J.), New York, Passaic (N.J.), Rochester (N.Y.), Toronto and Philadelphia.

This event is organized by the Plast co-ed fraternity Orlykivtsi, which is named in honor of Pylyp and Hryhoriy Orlyk. The Orlykivtsi were assisted by the Plast sorority Verkhovynky. Tanya Kosc directed the event; she was assisted by Deanna Hanchuk as secretary and Olenka Hladky as “bunchuzhna.”

This year’s theme was Ukrainian sports, and it explored how sports have played a role in the history and culture of Ukraine, as well as the lives of famous Ukrainian athletes. From using dance to train for battle to the creation of an Olympic team that represented Ukraine, as well as Ukrainian athletes in the diaspora, the participants were exposed to an array of new information. They demonstrated their knowledge and understanding in the Jeopardy-style intellectual competition, prepared short skits and constructed large dioramas. All three competitions took place on Saturday, and were topped off by a fun, energetic dance party for the participants.

A handful of competitors also competed for the titles of “Hetmanych” and “Hetma­nivna” in a breakoff group on Saturday and in front of their peers on Sunday. They discussed issues in Plast, Ukraine and the Ukrainian community. The winners of these titles were Hetmanych Pavlo Pencak from Newark and Hetmanivna Lana Pastushak from Toronto.

On Sunday, everyone attended a liturgy celebrated at Holy Trinity Ukrainian Catholic Church by the Rev. Dr. Ivan Kaszczak, also a member of Plast and Plast’s chaplain.

Following the service, everyone eagerly gathered to hear the results of the Orlykiada competition, which were as follows:

In addition to announcing the winners, a member of the Orlykivstvi, Bohdan Kopystianskyj, was honored with the highest distinction a senior member of Plast can receive – the Order of St. George in Gold. He was a competitor at the first Orlykiada in 1962, and eventually became the organizer and director of the event. He missed attending an Orlykiada only during the years he completed tours of duty in Vietnam (Airborne, Ranger, Special Warfare), and his absence at the event was felt by all.

The Orlykivstvi, and all past and present participants of Orlykiada, expressed gratitude for Mr. Kopystianskyj’s hard work and devotion.

Over all, it was a great weekend for all involved, and everyone is looking forward to the 58th Orlykiada in 2020.