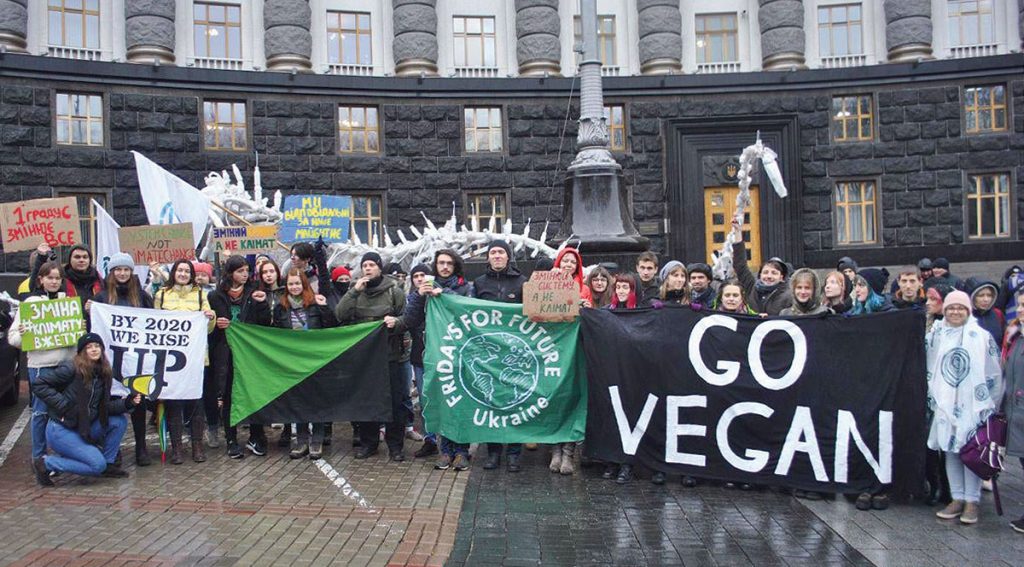 Fridays For Future Ukraine
Young Ukrainians strike near the Cabinet of Ministers of Ukraine as part of the global Fridays for Future movement.

KYIV – On Friday, November 29, passers-by near the Cabinet of Ministers building saw a group of about 40 young people with banners, signs and props who were demonstrating to call attention to climate change issues. “Change the system, not the climate,” read one placard. These young Ukrainians are a part of the global movement Fridays for Future, and that day they were protesting together with their peers in 159 countries all over the world.

It was also the day of the fourth Global Climate Strike, a coordinated series of worldwide protests. This time, some 3,500 events occurred on the same day – at least four of them in Ukraine. Kyiv, Ivano-Frankivsk, Kharkiv and Odesa hosted climate strikes to send a message to the authorities.

Fridays for Future is a movement that began in August 2018, after 15-year-old Greta Thunberg sat in front of the Swedish Parliament every school day for three weeks to protest the lack of action on the climate crisis. She posted what she was doing on Instagram and Twitter, and soon her initiative went viral. In Ukraine, the movement began in March of this year.

“We are the biggest climate movement in the world’s history – Fridays For Future. We realize the catastrophic consequences of climate change,” organizers of the Kyiv strike say on social media. “Therefore, we demand from our authorities that they take all possible measures to keep global warming within 1.5 degrees Сentigrade. Our form of influence is the climate strike.”

Ukrainian activists have two main demands of Ukrainian authorities. First of all, they are pushing the Verkhovna Rada to legislatively address the climate crisis and, together with climate experts, come up with a plan to overcome it. The second demand is that Ukraine make a statement at the COP25 (the U.N. Convention on Climate Change) in Madrid revising the nationally defined contribution of Ukraine to the Paris Agreement on climate change. This statement, Ukrainian activists say, should include Ukraine’s pledge to not contribute to greenhouse gas emissions.

The date for this latest Global Climate Strike was chosen intentionally to be held before the COP25, which is taking place on December 2-13. The huge climate conference was planned for Chile, but because of the massive wave of civil unrest, Santiago was replaced by Madrid after the Spanish government stepped up to host the event.

“The conference is designed to take the next crucial steps in the United Nations climate change process. Following agreement on the implementation guidelines of the Paris Agreement at COP24 in Poland last year, a key objective is to complete several matters with respect to the full operationalization of the Paris Climate Change Agreement,” the U.N. says on its official website.

The 2013 report of the U.N.’s Inter­govern­mental Panel on Climate Change (IPCC) concluded, “It is extremely likely that human influence has been the dominant cause of the observed warming since the mid-20th century.” The largest human influence has been the emission of greenhouse gases, such as carbon dioxide, methane and nitrous oxide. Climate model projections summarized in the report indicate that during the 21st century the global surface temperature is likely to rise a further 0.3 to 1.7 degrees Centigrade in a moderate scenario, or as much as 2.6 to 4.8 degrees Centigrade in an extreme scenario, depending on the rate of future greenhouse gas emissions and on climate feedback effects. These findings have been recognized by the national science academies of the major industrialized nations and are not disputed by any scientific body of national or international standing. Climate change will lead to droughts, floods and, as a consequence, the forced displacement, famine and death of millions of people, the report notes.

The Ukrainian NGO Ekodiya has conducted a model projection of flooding in Ukraine by 2100 if global warming keeps rising at current levels. According to its projection, more than 75,000 Ukrainians will become climate refugees due to the rise of the water level. Almost 1 million hectares of land could be flooded in the next 80 years. First of all, this will hugely affect Crimea. Notably, the Ukrainian government does not have control over the ecological situation on the temporarily occupied peninsula.

“All of us who work in the field of ecology in Ukraine agree with the statement that climate change prevention is the number one priority,” said Eugeniya Aratovska, one of Ukraine’s best-known eco-activists. “We have three main tasks in climate change prevention. First of all, it is an educational campaign because sustainable changes are impossible without the actualization of the problem and teaching of a new way to implement those changes. That is why we conduct lectures, excursions; develop national educational campaigns. The second task is to advocate for effective legislation. Without relevant laws which are long waited by Ukraine’s ecology – as well as the economy – there also won’t be massive progress. The absence of legislation will prolong the situation in which this topic will remain on the activist’s shoulders. It’s a relatively small group of people. Finally, the third task is the development of opportunities for people who want to commit to solving this issue, because without them everything will remain on the level of chatting and posts on social media.”

In recent years, Ukraine’s attention has turned more and more in the direction of ecology issues. With the painful experience of the 1986 Chornobyl nuclear accident, Ukrainians have personal stories of what could happen when ecological risks are neglected. The television series “Chernobyl” turned the eyes of millions to this issue. On the local level, more and more public figures are speaking out in support of climate change prevention. The popular electro-folk singer Onuka expressed her feelings on the issue by releasing the music album “Vidlik,” which is dedicated to the 1986 ecological catastrophe of Chornobyl.

Another big step in climate change prevention was made on the European level. On the day of the latest Global Climate Strike, the European Parliament approved a resolution declaring a climate and environmental emergency in Europe as well as globally. Members of the European Parliament also want the European Commission to ensure that all relevant legislative and budgetary proposals are fully aligned with the objective of limiting global warming to under 1.5 degrees Centigrade. “Given the climate and environmental emergency, it is essential to reduce our greenhouse gas emissions by 55 percent in 2030. It also sends a clear and timely message to the commission a few weeks before the publication of the Communication on the Green Deal,” said Pascal Canfin, chair of the EU Committee on the Environment, Public Health and Food Safety.

On its way to further European integration, Ukraine stands to join united Europe in its fight against climate change. But legislative changes would no doubt be much slower without the determination of young activists all over the world, including Ukraine.