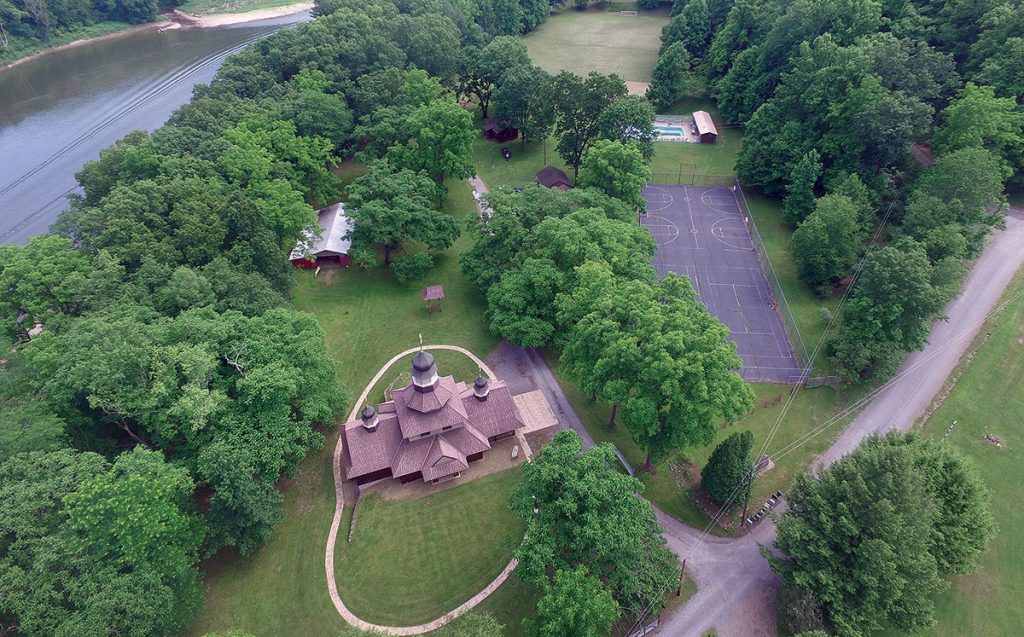 PARSIPPANY, N.J. – With the approaching 50th anniversary of All Saints Camp in Emlenton, Pa., in 2028, the time is now to improve on the foundation laid by the current leadership’s predecessors. Upgrades are planned that will allow the camp to grow, while continuing to offer a safe and fun encampment facility for programs of all ages.

“All Saints Camp (ASC) is an integral part of the Ukrainian Orthodox Church of the U.S.A. (UOC-U.S.A.) and its role preserves continuity of the community,” said Michael Nakonachny, chairperson of fundraising committee. “The targeted donors include what we call ‘friends of ASC,’ focusing on ASC alumni and campers.”

Mr. Nakonachny invites those able to join for monthly work weekends by contacting him at Michael@allsaintscamp.org or 440-503-3151.

Its Christmas e-mailed newsletter reported a new storage system was designed and installed in cabin four by Mr. Nakonachny and Hans Harasimchuk.

Josh Oryhon, All Saints Camp manager, explained how ASC can better meet expectations of parents and campers, ensure child safety, improvements to the facility as well as fostering a sense of commitment to the camp.

Mr. Oryhon said the camp aims to provide clergy on-site, with the assistance of Natalie Kapeluck Nixon, Office of Youth Ministry. A sense of solidarity among campers develops over those few weeks because of the camp experience, he said. It is these lifelong youth friendships in the Ukrainian Orthodox community that develops leadership roles, which have been a visible part of the regular Sobors through the participation of more young adults.

Among the goals, Mr. Oryhon highlighted that ASC is looking to host a Youth Sobor at the camp. Other programs hosted at ASC include the Kobzarska Sich bandura camp and its choral workshop (led by the Ukrainian Bandurist Chorus), as well as the People of God, an ecumenical Christian religious community serving the needs of the Pittsburgh area for 45 years.

What many people don’t realize, Mr. Oryhon added, is all of the hard work that goes on at ASC during the eight months of the year so that the summer season at ASC (only seven weeks) runs smoothly.

During this year’s Sobor for the UOC-U.S.A. on October 16-19, 2019, nearly two-thirds of those present had been former campers, staff members and volunteers at ASC, underscoring the crucial role the camp plays in the development of church leaders and Orthodox Christians.

Maintenance and upgrades will be the main focus of the All Saints Camp while volunteer efforts will remain essential to this work. To supplement this work, a capital fundraising campaign has been launched by the camp committee, with projects aimed for the next 50 years and beyond.

The drive was bolstered by $100,000 raised by the UOL and an $80,000 mortgage provided by the Ukrainian National Association. The purchase was finalized on April 20, 1978. Additional support in the realization of this goal came from the planning and work of the devoted faithful of the UOC-U.S.A., as well as the encouragement of clergy, parishes and UOL chapters.

Since its dedication in 1978, the facility has grown to include the current buildings and structures. A very generous anonymous donation fully funded the construction of All Saints Chapel, which was consecrated in 2008 by Metropolitan Constantine. Leadership of the UOL, its chapters, parishes and individuals raised funds for the iconography and chapel appointments.

This year, the lower level of the Millennium building was renovated to included new ADA-compliant restrooms and shower facilities, climate controlled heating and cooling, and an expanded lounge.

The work of the founders of All Saints Camp was visionary for its church youth to have a place of their own. That work continues today to ensure that the camp remains not only a vital part of the Church, but that it also stays relevant.

Since the ASC Capital Campaign was launched in August, more than $73,000 in contributions and pledges have been collected, including a $25,000 pledge from the Ukrainian Orthodox League.

For information on programming, job opportunities and registration, visit www.uocyouth.org or www.allsaintscamp.org/50. ASC Booster Club Calendars are set for 2020, contact Chris Mills (ChrisMills@allsaintscamp.org) for more information and to purchase. Readers are also encouraged to follow the UOC Office of Youth Ministry All Saints Camp on Facebook. The camp committee members are available to visit parishes throughout the U.S. (by contacting josho@allsaintscamp.org or 724-867-5811) to explain the different camping options for children and staffing opportunities for adults.